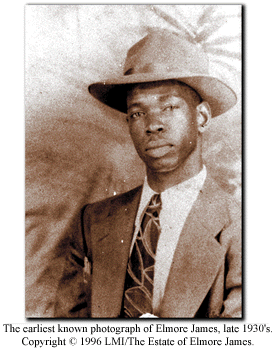 Some people... well, I don't need a reason to be thinking about Elmore James. "The man who never made a bad record," as he was called, the man with the king- size voice and a unique guitar style that has been oft imitated and never ever duplicated.

What is it about that riff? If you're a blues guitarist and have ever attempted to play it, then you know that it's easy, technically: a slide up to the octave on an open D tuning (DADF#AD) then back down to the open strings. So, if it's that easy, how come no one but Elmore ever got that sound? Not even Homesick James, his cousin, got it and he was right there on the early versions.

The earliest version of Dust My Broom, as opposed to this more famous recording, has Rice Miller, the ubiquitous Sonny Boy Williamson II, on harmonica and was recorded by Trumpet Records owner Lillian McMurray in Jackson, Mississippi on August 5th, 1951.

According to blues legend, Ms. McMurray surreptitiously recorded Elmore and Rice Miller during what Elmore thought was a practice session and released it on her Trumpet label. Ms. MacMurray always maintained, however, that all the participants knew they were being recorded.

That version became a hit, but since Elmore disappeared from Jackson after recording it, the "B" side was a version of Catfish Blues by Bobo Thomas that Ms. McMurray had sitting around. 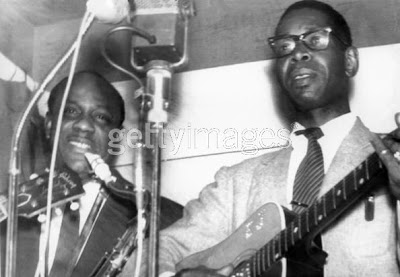 Based on a tune recorded by Robert Johnson in 1936, James changed Dust My Broom from an open "G" tuning to a open "D" and emphasized a variation on Johnson's riff that was far more powerful than Johnson's original interpretation. Elmore played and recorded that lick over and over again until his premature death from a heart attack in 1963.

Early 78's by Elmore's full band, the Broomdusters, featuring his upfront electric slide playing, some on an acoustic with a pickup in the soundhole, piano, bass, drum, tenor sax and occasionally harmonica (an uncredited Sam Myers) pretty much jump off the turntable and provide an alternative to Muddy Waters' Chicago Blues Band sound, the prototype of the fledgling Rock and Roll band instrumentation. 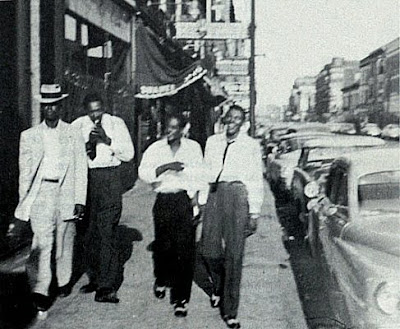 After his Trumpet debut, Elmore went on to record for Modern, Flair, Meteor, Chess and finally Bobby Robinson's Harlem- based Fire and Fury labels. Each label has it's share of Elmore masterpieces, and prove that the DMB lick was not the only one he had mastered. Elmore's cover of Tampa Red's It Hurts Me Too and his own Stranger Blues with it's irresistible second- line- like groove attest to his versatility. Shake Your Money Maker, The Sky Is Crying, Madison Blues, Baby Please Set a Date, No Love in My Heart, One Way Out, Twelve Year Old Boy-- the list goes on and on. These are all just amazing recordings. I don't think there's a bad song in the entire output. Even B.B. King has recorded bad songs- ever hear Tickle Britches? 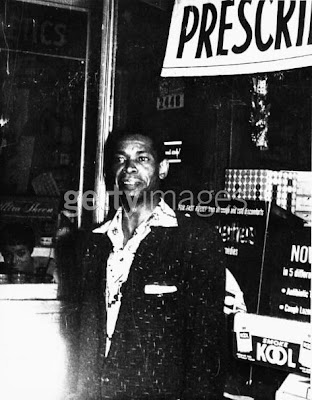 I'm not positive, but I believe that everything Elmore recorded recorded is now available, so try this and I'm sure you'll find what you're looking for. A big change from my early days of blues exploration when there were maybe one or two discs, and one of those was a British import. There's also an authoritative biography by Steve Franz, sadly out- of- print, but still available used.

Elmore James, World War II veteran, gold- record recording artist and virtuoso blues guitarist, had a bad heart. His third heart attack killed him in the spring of 1963, shortly before the great blues revival of the '60's. Very few white blues fans ever saw him live, but the ones that did never forgot it. Here's Nick Gravenites from his "Bad Talkin' Bluesman" column in Blues Review magazine: "...deep down we knew that no matter how funky we felt in our burned out blues ennui, we had a comforting ace in the hole because there was always Elmore James. Elmore could reach you no matter where you were, he could raise the dead."

It doesn't get much better than that, does it? 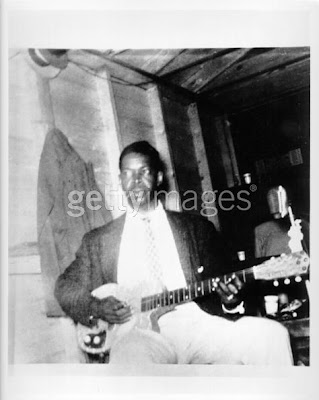