Last Saturday night a smoking car was found parked near Times Square. T- shirt vendor Lance Orton, with the help of handbag vendor Duane Jackson, called the NYPD and the car, which turned out to be filled with potentially explosive materials, was neutralized by the bomb squad.

By May 4th the NYPD, working with the FBI, pulled a suspect, Faisal Shasad from a plane waiting for take-off at New York's Kennedy Airport. The plane was bound for Dubai.

In other words, another would- be domestic terrorist incident was prevented by the efforts of observant and courageous everyday Americans.

Ever since Flight 93 crashed in a field in Pennsylvania on 11 September 2001, American citizens have become the first line of defense against domestic terrorism. From inept would- be hijacker Richard Reid (the Shoe Bomber) to equally inept but more self- destructive would- be hijacker Umar Farouk Abdulmutallab (the Underwear Bomber), attacks have been thwarted by the quick thinking of citizens in the immediate area. Obviously the Times- Square incident is no exception.

Everyone from Dick Cheney on complains about the so- called soft stand of the Democratic administration on terrorism. Well, it doesn't take a genius to realize that terrorism, like assassination, is extremely hard to prevent. The terrorist has the advantage, obviously, because he (or they, or whatever) know when and where the attack will take place.

This is why police aren't waiting in bank vaults for the robbers.

But given the alertness of decent citizens, who seem all but invisible to politicians these days, coupled with the safeguards in place, such as no- fly lists (not really working right now, evidently), airline safety measures and very capable law enforcement agencies, terrorism in this country seems far lower than in others, at least to me.

I really like the way we've stepped up to the plate to prevent terrorism from terrorizing us. Because when it does, then the terrorists have won. And I want them to lose.

A tip of the L By L hat to Lance Orton and Duane Jackson, as well as the NYPD for doing what they did. 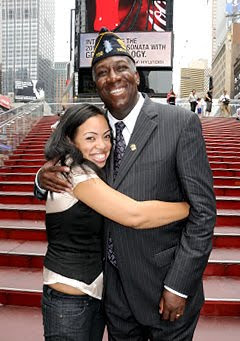 yeah, let's hear it for the indomitable American spirit! That's one thing about this country that makes me proud. Another fine, well-written blog!