We saw Mr. Rockwell here in the L By L archives last December at Christmas, appropriately enough. I found a nice series of Saturday Evening Post covers and published them to give us all that unique nostalgic sense that Norman Rockwell's work always brings.

I've just come from an exhibit of Norman's work (my pal Norman!) at the American Museum of Art here in Washington, DC. This exhibit is culled from the collections of those two Norman- wannabee hucksters of the silver screen, Steven Speilberg and George Lucas. And, no matter what they may think of themselves and each other, neither one's work even begins to plum the depth of Rockwell's commitment to an America of the heart, which may or may not have existed physically, but certainly exists emotionally for anyone who grew up in the Rockwell era (1927- 1966- ish).

My prime purpose in seeing his original paintings was to check out his actual painting: the brush work, the thickness of the paint, his technique for applying the paint to his canvasses.

As I mentioned in the piece on Frank Frazetta, Frank used very thin layers of oil paint which dried quickly and allowed him to make his deadlines and still deliver a fine oil painting.

Rockwell doesn't do this. He paints like the old masters he so admired. He uses gobs of paint a la Rembrandt to build up texture when he needs to, and thin coats when he needs to use the canvas itself as part of the color or texture statement, as in this picture, Let Nothing You Dismay: 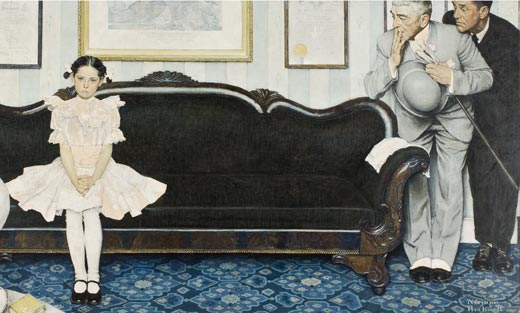 The couch is done almost as a wash of black, gray and white to achieve the texture of a horsehair couch. The diplomas behind the little girl have small buildups of whitish paint, as does a lamp in the lower left, unfortunately cropped in this picture, as highlights of the reflections on the glass globe. The face of the little girl is exquisitely painted. You can tell that this is where most of the real work went. Her dress also contains his three- d highlights, but hangs curiously, stiffly on her frame. The two men in the corner are the usual Rockwell fodder: exaggerated expressions, the hand to the mouth in an Edward Everett Horton "Oh my!" expression. As always, their clothes are perfect. Rockwell paints clothes the way haberdashers think we should wear them, that is to say, without odd wrinkles or sweat stains.

In person, the technique involved in painting the texture of the rug is probably the most incredible in the picture. Echoing Vermeer, Rockwell is able to really suggest the weave of that rug.

Like Maxfield Parrish, Rockwell is at his best with a straightforward composition where everything is a series of parallels. Here's another tour-de-force of technique from the 1960's: 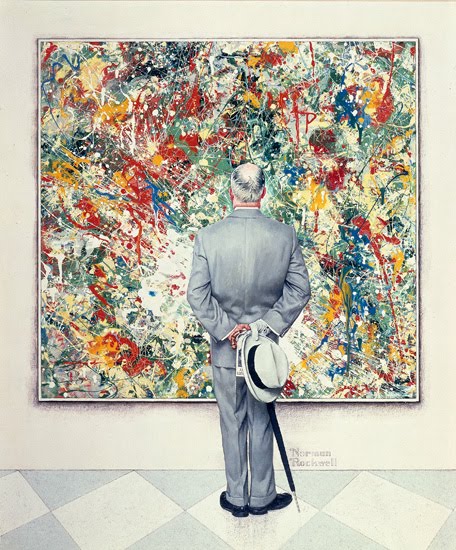 As one enters the show there's a huge photograph, life sized, of Rockwell painting the "Pollack". It's surrounded by other modern art pastiches which I guess he gave up on as not being distinctive enough. Sure enough, he's dribbling paint from a paper cup.

The figure is featured in some of the other versions as is a younger figure, maybe a kid. It's a real insight into Rockwell's sense of his work. The final picture here is perfect. We see the work of art, we read it as a Jackson Pollack, we read the viewer as a person with a different background because of the details: the clothes, the hat, the umbrella, the gloves, the little peak at the program, the impeccable tailoring of the suit, even the haircut. Was there ever such a person? Mr. Drysdale from the Beverly Hillbillies? (Lots of movie and TV iconography came from Rockwell illustrations.)

The caption next to the painting quotes Mr. Speilberg to the effect that Rockwell saw his moment passing- the old guard givers way to the new. Of course the Pollack part (keeping in mind that it is another Rockwell) is as dated as Rockwell part. Maybe more, as it invokes a much shorter period of time in American cultural history than Norman Rockwell's work.

Of course, Speilberg and Lucas, two directors who, in my opinion, make instantly out-of-date movies, constantly try to put their stamp on this work. They really don't get it. Their work is trite. This work is profound. What was once viewed as "mere" illustration has now become Art with a capitol "A", much like N. C. Wyeth. The emotional impact of a good Norman Rockwell is not diminished by its accessibility, it is enhanced by that accessibility.

Take a look at this one: 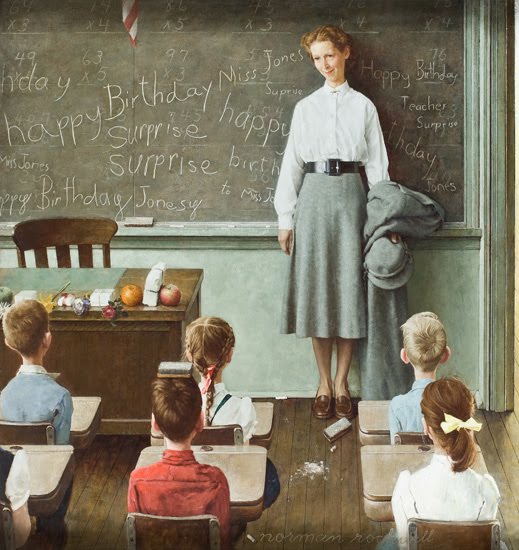 Look at the expression on the teacher's face. It's the whole story. A cinematic equivalent might be the expression on Dalio's face in Rules of the Game when he shows his guests his new machine. That was the work of Jean Renoir. Not a Speilberg or a Lucas.

Another aspect of the show are the cartoons (in the classical sense) of the final paintings. Here's Miss Jones again: 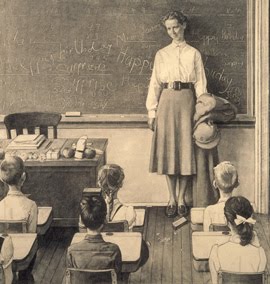 Although you can't see it in this reproduction, the face is slightly different. And even though Rockwell's pencil technique is flawless, I mean, really flawless, the drawing is not the equal of the painting. By the way, his pencil/ charcoal technique alone is worth seeing the show.


Sometimes the whole thing is perfect: 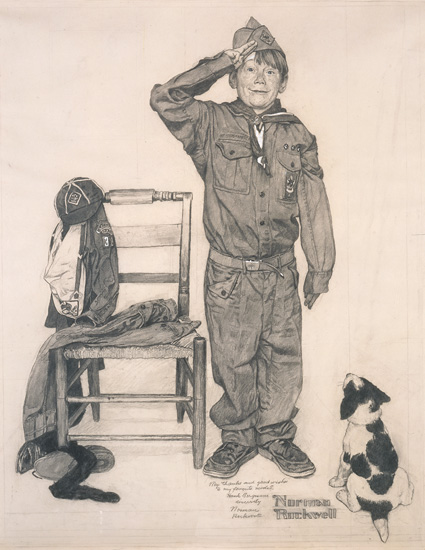 The Boy Scouts were my introduction to Norman Rockwell's work. I was in the Cub Scouts and Washington, DC's scouting headquarters was up the street from  my house on R Street near Connecticut Avenue, on the corner of Connecticut and Florida Avenues. They had the original of the painting of the different scouts, Cub, Explorer, Eagle, etc. in their lobby. I've never forgotten it.

This painting captures a resonance for me, a time of building a pinewood car with my dad or sewing patches with my mom. A moment when my childhood seemed almost normal.

There are flaws to Norman's work. For instance, his perspective is really strange. Maybe it's because he worked with so many photographs and therefore replicated different lens' focal lengths, or maybe he just took extraordinary artistic licence. Whatever the reason, once he deviates from his parallel line obsession, he seems lost. This illustration from Little Women, for instance. The figure seems to float above the sofa, which itself seems unconnected under the figure. 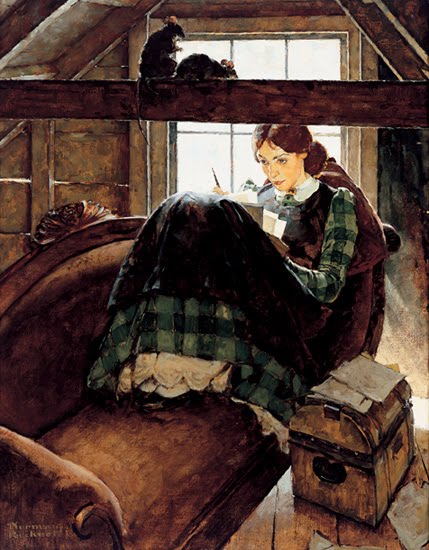 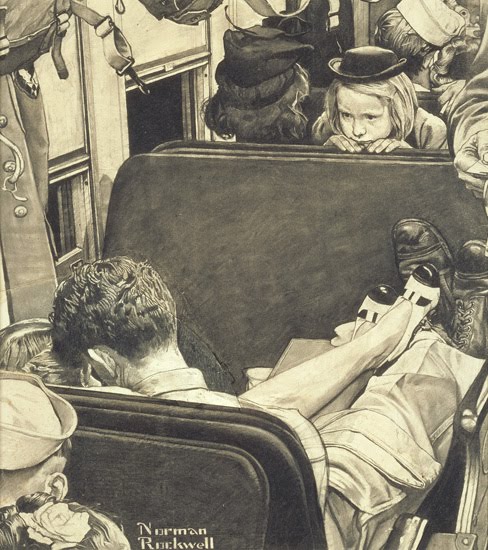 Again, perfect pencil technique, great moment, etc, but my eye tells me these people are getting squeezed like accordion pleats in that seat. Interestingly, Rockwell glued a piece of paper to the head of the soldier, a common way for illustrators to mask a mistake without trashing the whole piece.

This is a great show, highly entertaining, truly wonderful. Please go see it, despite the comments of the paintings' owners. At least they bought these works instead of the works of, say, Margaret Keane.

Ultimately, Rockwell himself became a Norman Rockwell, so synonymous was he to his Art. Here's his sweet homage to himself, Rembrandt, Vermeer (The Art of Painting), Van Gogh, Picasso and others. 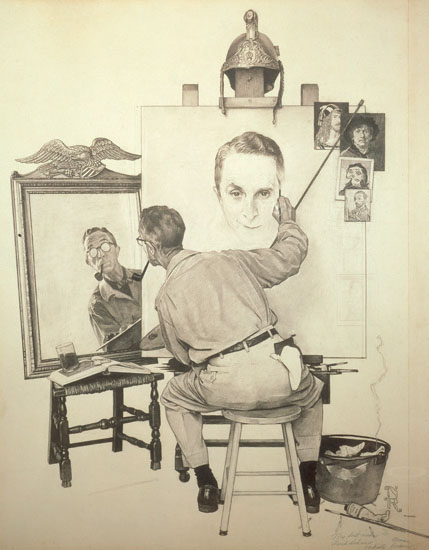 Posted by Bret Littlehales at 5:15 PM