The film, which helped inspire the Coen Brothers' Oh Brother, Where Art Thou (along with the Odyssey  by Homer), is vintage Sturges: witty, cynical, sentimental and completely original.

For a certain period in the history of cinema, all of Preston Sturges' movies were just like that. He was one of these rare talents that produced high quality material that resonated with the public. Kind of like the Beatles.

Preston (August 29, 1898- August 6, 1959) was born Edward Preston Biden in Chicago, Illinois. His father was a classic ne'er-do-well who deserted Preston and his mother, Mary Desti, then reappeared years later asking for reparations once Sturges became famous. Again, much like Beatle John Lennon's father.

His mother remarried and Sturges was raised by his stepfather Solomon Sturges, whose last name Preston took. Even after Solomon and Mary became estranged, Solomon continued to treat Preston as his son, and was really the only real father figure in Preston's incredibly perepitetic childhood.

His mother, a Bohemian Auntie Mame- type figure, is a whole other story in and of herself. She ran a beauty business- cosmetics, lipsticks, (Preston had invented a kiss- proof lipstick for her line) and powders, and fancied herself a kind of artistic grande dame. Her best friend was the impressionist dancer Isadora Duncan, and an early photograph shows a very young Preston unhappily dressed in a toga, and not as a costume either. She had an affair with (among others) the British magus Aleister Crowley and even collaborated on his book Magick (Book 4). 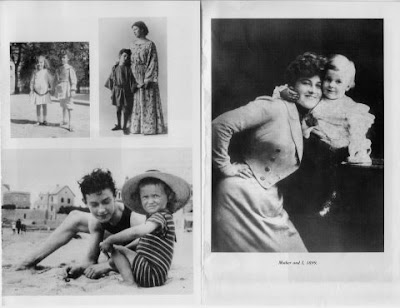 Mary took Preston with her everywhere and this most American of directors spent most of his formative years in Europe. He learned to speak fluent French, and perhaps that is also where he acquired his veneer of sophistication and his cheerful cynicism.

His mother's relationship with Isadora Duncan ended the day Mary Desti gave her friend a new scarf and waved goodbye as Duncan drove off in a car. The long scarf got caught in the spokes of the wheel and snapped the dancer's neck. Isadora died instantly.

Preston was in the States at that point, and had begun his own quest for success. With his unique background and strange blend of American and Continental sensibilities, he began writing a script for a Broadway play. The title was Strictly Dishonorable.

Strictly Dishonorable (what are your intentions, sir?, the proganist is asked. Strictly dishonorable, he replies) was a huge hit and set the mold for Preston's career.

Hollywood came next with a string of movies written and directed by Sturges for Paramount Studios. Beginning with The Great McGinty, he hit with a string of successes and pretty much invented a new genre- the so- called screwball comedy. In Sturges movies, men and women have affairs, women get pregnant, men falsify their war records, shoot guns on trains, lie about their marital status, bilk rich people out of their money and generally behave like banshees, in short, they do anything to acheive their goals.

He used many of the same actors in every film, including William Demarest, Jimmy Conlin and Eric Blore.

Within a frantic five year period, 1939- 1945,  he made his greatest films: McGinty, The Palm Beach Story, Christmas in July, The Lady Eve, Sullivan's Travels, The Miracle of Morgan's Creek and Hail the Conquering Hero. Those years are Sturges' great moment in film. He owned a restaurant, the Players, a legendary hang- out for himself and his pals. He had affairs with beautiful women, including his secretary to whom he dictated his scripts, sometimes completing the next day's scenes only hours before the pages were to be filmed.

He won the very first Oscar given for Original Screenplay.


And then it all went downhill.

Like all riches-to-rags stories, it wasn't just one thing, it was a million things. His secretary left him, he left Paramount after they re-cut his serious bio- pic The Great Moment, for  a partnership with Howard Hughes, already beginning his own descent into madness, in a venture called California Pictures. Hughes kept Sturges on a leash for several years, and despite one film, their partnership eventually withered and died. The Players hemorrhaged money and was eventually closed by the IRS.

Several films followed, one for Fox, Unfaithfully Yours, remade by Mel Brooks years later. (Unfaithfully Yours has undergone a critical reevaluation in recent years, and is thought of much more favorably now than it was on its release.)

Although Sturges' reputation continued to decline, he seemed always to be busy, working on a screenplay, an autobiography, television projects and plays. But his downhill spiral remained unchecked, and he died alone in a New York hotel room, while working on the autobiography, entitled, amazingly enough, The Events Leading Up to My Death.

Fortunately for us, all of the great Paramount movies are available on DVD, and the boisterous, larger- than- life work in them remains a delight even now. The witty dialogue delivered at breakneck speed by Sturges' able repertory company sounds as fresh as when he dictated years and years ago.

Several of his stars reached their comedic peak in Preston's films: Barbara Stanwyk, Veronica Lake, Eddie Bracken and Betty Hutton are never funnier in any of their other films. Sturges raises the art of the character actor to dizzying heights.

His approach to life in America forms the other half of Frank Capra's heartwarming sincerity and faith in the common man. Seen together, along with Ford's Westerns of the period, they form the cinematic hat trick of life in America. They are our story and still resonate with us today. For every noble man, there is an ignoble man, but he may, like Governor McGinty, have it in him to do one right thing in his life. In a Capra movie, George Bailey pays the bills. In a Sturges movie, McGinty has to leave the country to keep from going to jail.

That is the truth Preston Sturges saw and gave us. Hail the Conquering Hero.
Posted by Bret Littlehales at 12:27 PM

I've always had a soft spot for The Sin of Harold Diddlebock. It's not generally listed as one of his great films, but I loved it when I first saw it about 30 years ago.