I've Smelled That Gas Before

As the Occupy Wall Street protest continues peacefully in New York City, police in Oakland, CA are hurling tear gas and arresting protesters. According to news reports, the mood remains festive (free barbecue and ice cream) and the smell of pot permeates the air. I love that last- the smell of pot and tear gas was THE smell of the California '60's- much like the smell of urine and Gauloise cigarettes in Paris during the same era.

Of course, that's what the press says, but it's probably true. In California it's less harmful and way less frowned upon to smoke a joint in public than a cigarette.

In a "Day of Mass Action" the Port of Oakland has been shut down in the general strike and banks have closed. ATMs were blocked by trash dumpsters and protesters smashed windows at Wells Fargo and Bank of America branches.

One woman was delayed in traffic fifteen minutes while marchers blocked the street. She honked her car horn in solidarity. However, a man driving a Mercedes tried to run his car (what a detail- of course it was a Mercedes!) into a group of protesters, injuring two. Or so it has been reported.

Wouldn't it be great if they do something about the music while they're at it? 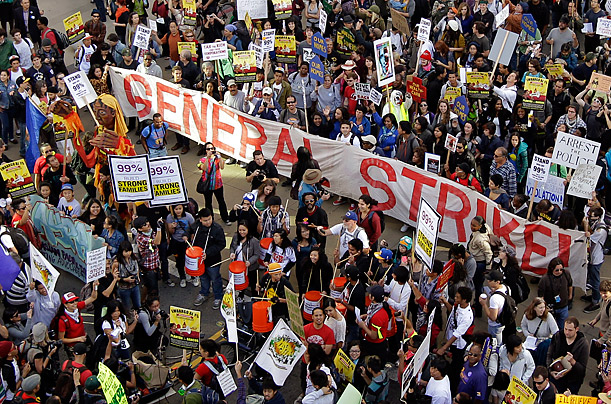 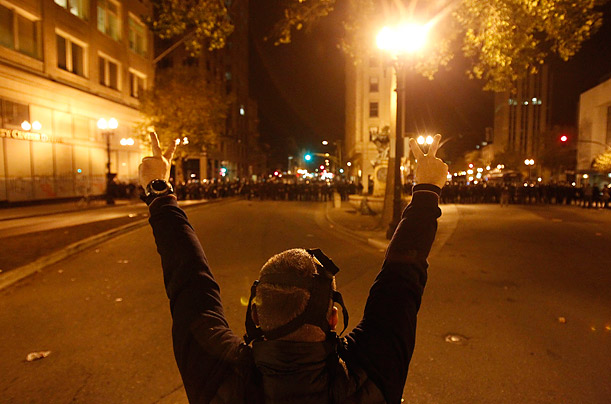 Posted by Bret Littlehales at 6:21 PM

Music's getting better. Cee Lo Green for an example.

I'd agree w/ you there, except for that soft drink commercial.