Welcome Back, Lord Buckley (It's His Birthday!) 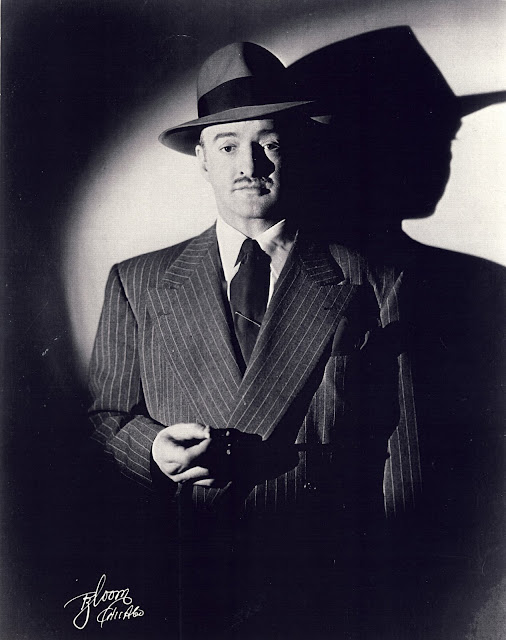 My friend John Hostetter reminded me this AM that today is Lord Buckley's birthday.

Whew! First Sonny Boy Williamson I, then Muddy Waters and now Lord Buckley. The blog is turning into the Birthday Hall of Fame! But, well... it has to be done, Gentle Readers. We can't let Lord Buckley celebrate his birthday in silence, at least not here in L by L.

I first wrote about Lord Buckley here. I had been sent a rare and wonderful portrait (reprinted above) of his Lordship by Sir Wilhelm Freeland- Archer of New Orleans LA, which necessitated a blog entry right then and there.

At that time I didn't know how to put video in the blog, so this time we're going to actually get to see his Lordship in action! And some biography, although, as I said in the last blog, there's a lot of info on the interweb.

Born in California in 1906, Buckley's early years are somewhat sketchy. We do know that by the 1930's he was in Chicago, eking out a living on the fringes of show business, although he considered himself a vaudeville performer. He had a kind of acrobatic act, doing flips from a standing position, and hurling himself into the audience.He also worked as an emcee at dance marathons and even briefly ran his own club, Chez Buckley, reportedly bankrolled by Al Capone.

During World War II , he entertained the troops for the USO, where he met then- newspaper columnist Ed Sullivan. They became friends  and Sullivan had Buckley on his television show several times, always with the same act: a living ventriloquism affair, called "the Four Chairs", where Buckley would pull up members of the evening's cast (including Sullivan) and do their the voices in a kind Amos and Andy dialog as he manipulated their heads. Kinescopes of the performances  still exist (I've seen some) and, while it is embarassing to hear Buckley's thick version of black speech, there is a kind of energy to it.

Here's a clip from 1949 that gives an idea of Buckley's persona of the time:


An Armstrong impression, and a story, told in dialect, while wearing white tail and tails.

At the time of his final appearance on Sullivan, Buckley had found the voice that would make him immortal, the ultimate white hipster voice, the definitive Lord Buckley voice, the "hip- so- mantic" Saint voice.

He had recast Shakespeare's "Friends, Romans and countrymen," speech as a so- called "hip" eulogy, using jive as the language, cadenced in a ultra- theatrical manner, and calling it "Hipsters, Flipsters and Finger- Poppin' Daddies." Sullivan vetoed the Shakespeare piece, and yet one more "Four Chairs" performance took place. (Wish those were on YouTube.)

In doing "Hipsters, Flipsters", Buckley moderates the Amos and Andy cadences  and uses his own voice, eliminating the "dese, dem, dose" mannerisms so offensive to the ear today.  Although the origins are still African- American, his monologues, with the clipped syllables and rapid delivery are clearly Buckley's own.

Here's a video that I shot of John Hostetter doing "Hipsters, Flipsters":


And one of my favorites, Buckley's appearance on Groucho Marx's "You Bet Your Life," where you get a little taste of the Maestro himself doing "Hipsters, Flipsters":


I'm sorry to say I can't find any videos of Buckley in action doing any of his true classics, like the retelling of the life of Christ, called "The Nazz," or the amazing "Train", or "Governor Slugwell." Amazon lists several downloads, and at least one CD, including a concert at the Ivar theater in Los Angeles (an appropriately sleazy venue.)

I recommend them all (I haven't heard the Ivar show), of course, or I wouldn't be writing this.

By the late 1950's, Buckley was doing the voice of the beatnik character on Beanie and Cecil, a cartoon show originating from Los Angeles, created by ex- Warners animator Bob Clampett. After his death, Scatman Crothers voiced the role.

In October of 1960, he traveled to New York for work only to have his cabaret card revoked because of a 1941 marijuana conviction. While fighting the revocation, he collapsed and died in a hospital there on November 12th.

Seven or so years later, in the Summer of Love, Buckley's recordings would be played on underground FM stations and interest in his pioneering lifestyle would be rekindled. Today there are Buckley- inspired festivals and gatherings, and several Buckley interpreters working professionally.

April may be the cruellest month, but it must also be one of the hippest: Muddy Waters and Lord Buckley. Look to the stars, my friends!

Fantastic beat ! I would like to apprentice whilst you amend your web site, how could i subscribe for
a weblog site? The account aided me a applicable deal. I were a little bit familiar
of this your broadcast offered vivid transparent concept