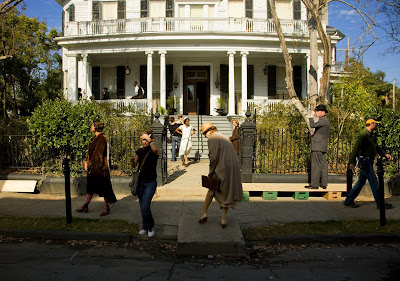 I had the incredible opportunity to go to New Orleans in December of 2005, right after Hurricane Katrina had devastated the city. It was clear to me then that America's Greatest City would rebuild, and it was clear to me that it would never be quite the same.

I made a series of hopeful pictures for a website that faltered in development, and took time off to tour the devastated ares as well. The term Nuclear Winter came to mind when I saw the damage around the canals and failed levies. I won't attempt to describe it. Better writers than I have done that better than I ever could.

I went back a few months later and and things were a little better. There was no denying the optimistic spirit of the New Orleanians. It seemed as if everyone was pulling together the way I imagine the British did during and right after WWII. Most of the raffic signals had been fixed. All of the trashed refridgerators had been disposed of. The area under the I-10 was still filled with useless cars tattooed with white waterlines. But life was definitely going on, as they say. I saw a second- line and JazzFest was right around the coner.

The city had also been taken over by the film crew making The Curious Case of Benjamin Button. Brad Pitt was gone when I got there, his scenes having been filmed, but the crew's prescence was felt strongly in the French Quarter and the Garden District.

My friends, the Freeland- Archers (not their real names) live in the Garden District. One night gourmet pizza from Reginellis arrived at their front door, courtesy of Paramount. Another time, fresh dirt was dumped onto their street as vintage autos drove (or were pushed) slowly past their house. The house featured in the movie was a block away, and sometimes I had to walk way around to get to where I was staying.

No matter, though. It was fascinating. The production assistants assigned to keep foot traffic away from the house were courteous and gentle. Once I actually walked into a shot, and it had to be redone. They couldn't have been nicer about it. I apologised profusely. No problem.

Years earlier I blundered onto a night shoot of a Batman movie in Chicago. I guess Chicago is Gotham City and Metropolis is New York. After being told that I couldn't register in the hotel where I had reservations, I was also threatened with arrest by a Chicago policewoman who told me I was disturbing the peace. All this as helicopters whirled in the air overhead. I kept saying, "What?" with my hand cupped around my ear. "Disturbing the peace," she said. "The PEACE!!"

The Button set was obviously completely different. It was representative of a sensitive director making a lyrical film in a ravaged city. The finished movie is a valentine to an all- era New Orleans. New Orleans is interesting in that everything that ever happened there is happening right now, even if you can't find it. You've probably only missed it by seconds.

Let me give you an example: one night, pre-Katrina, I woke up at around 3AM to do some night pictures. I had just done a long exposure of the Cafe DuMonde and was walking back to the car. Behind shuttered doors I heard Louis Armstrong playing the famous opening cadenza of West End Blues. Now, was this a recording of the Hot Five, made in Chicago, or was Louis actually standing behind the door of the French Quarter flat, blowing some midnight blues? All I heard was unacompanied trumpet. As I was pondering this, bubbles came floating down from a balcony. Maybe a hundred bubbles. I stepped back and looked up. There was no one there. Aside from Louis and me, the whole street was deserted.

Benjamin Button evokes this perfectly. It's really sweet movie. I recommend it.

A note on the pic above: I shot it, and it's made from three different shots, which is why you can see the make-up woman twice in the frame. The actor who plays Button's father, Jason Fleming is on the right just outside the fence. Taraji P. Henson is inside the fence to the left of center, with her hands on her hips. I think they're shooting the party scene, where Benjamin meets Daisy for the first time.
Posted by Bret Littlehales at 11:13 AM

This was good and interesting reading. I really like what you said about the crew at Paramount and how they treated everyone so nicely. It's reassuring to know that civility still matters to some people. Especially when you rarely see it being practiced any more.

Cool! That's a great picture. I just saw the movie-- I liked it. Man, Cate Blanchett is beautiful.

I agree with Mom about civility and how nice it is that everyone on this set was so courteous and kind. That's very refreshing. I still haven't seen Benjamin Button but I really need to!