On a cold night in early February, 1942, a short, rumpled man in a stained overcoat bustles through a cordon of police. He carries a 4X5 Speed Graphic Press camera with a flash attachment. He is puffing on a freshly lit cheap cigar- a stogie. The police make way for him, they all know him, think he's a character. He speaks their language. "Whaddaya got, boys?" he asks in heavily accented English. "Burglar," says one of the cops. "Dead," says another. "Is that the gun?" asks the photographer. "Yeah," says the first cop. "Guy here was off- duty, caught him robbing the Spring Arrow Club."

The photographer, whose name is Weegee, moves to the other side of the corpse, away from the cops. From this angle he can show the body and the gun which has slid about eight feet from the dead robber.

He makes sure his camera is set and that the flashbulb is screwed in. It's too dark to focus, so he adjusts his aperture to f16 and syncs the flashbulb. He doesn't bother with a tripod and he can't see directly through the lens with this type of camera. He composes in the dark, making sure that all the information he needs is there: the gun, the stark texture of the sidewalk, the victim, face-down, blood under his flattened face.

The flash bulb detonates. Weegee pulls out a handkerchief and unscrews the hot bulb, then screws in another. One more shot and he says, "Okay- it's in there somewhere. Get warm, boys." Then he's off. 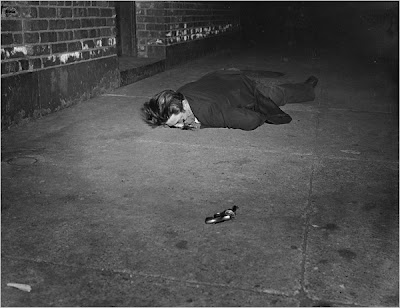 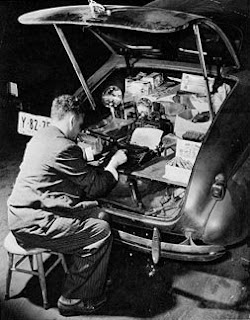 Thanks to a police scanner, he was usually the first photographer on the scene, and kept supplies for a darkroom in the trunk of his car where he could develop and contact print his detail- laden 4" X 5" negatives. He worked for newspapers with early morning deadlines, like the left- leaning PM, and usually began his patrols after dark, armed with an abundant supply of bulky film holders and blue flashbulbs.

Weegee's beat was crime, human interest, the sordid, the twisted, the eye-catching, the pathetic, the noble. Every once in a while, even the beautiful. 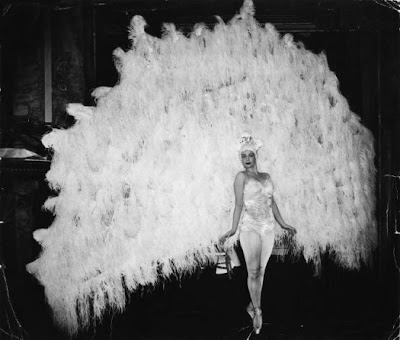 He photographed with a slumming eye, like a film- noir character. His use of straight-on flash gave a direct, unflattering and unrelenting quality to his street work that actually became the look of New York City.

He lived in the Village, by Broome and Market Streets over a gun shop, in a singularly decorated one- room flat. That is, he slept there. He really lived in the night-time streets of a desolate city, made more so in his photographs. 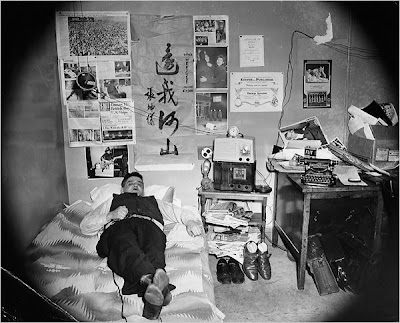 His work was noticed by the artistic society of New York that he had earlier scorned, and prints appeared in exhibits at the Museum of Modern Art in 1943, and subsequently he shot for Vogue and Life, among others. But this was not his metier, and his last years, though commercially successful, are full of Weegee the character, the cigar-chomping eccentric with the heavy hand and the distorted lens. 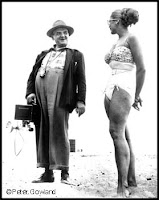 He was the still photographer for Dr. Strangelove, and reportedly gave Peter Sellers his accent for the title character. 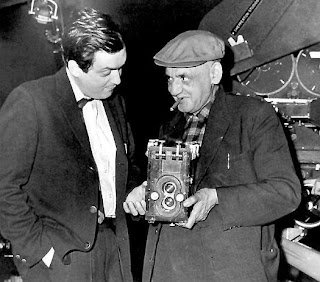 A photograph of Weegee and Kubrick depicts them as contemporaries, mentor and pupil almost (Kubrick was a Look Magazine staff photographer at 19, the youngest ever), and displays none of Kubrick's legendary stand-offishness. Just a couple of New Yorkers gabbing about photography.

By the way, just what kind of weird hybrid is that camera anyway?


It's the pre- art Weegee that lives on: those unblinking images, a harbinger of photographers to come, like Lisette Model and Diane Arbus, William Klein, Richard Avedon and Irving Penn, whose early street images owe a debt to Weegee's ironic eye. 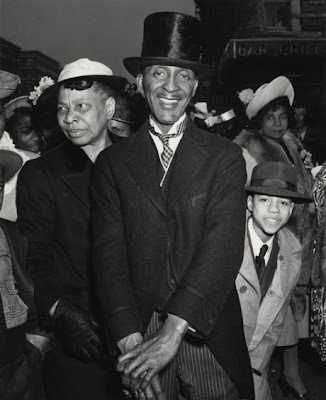 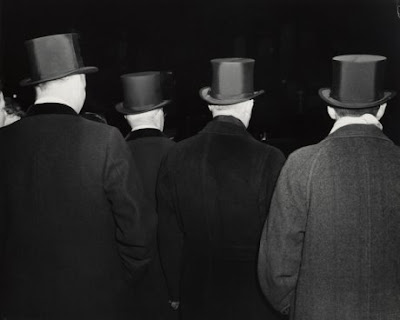 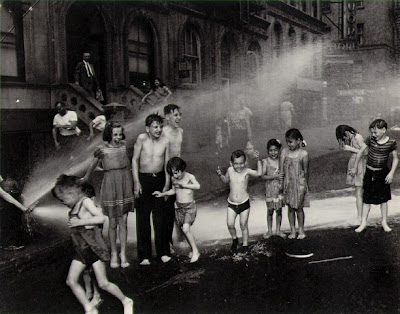 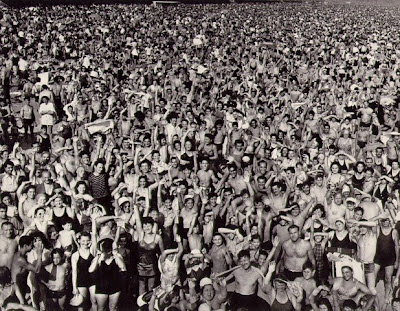 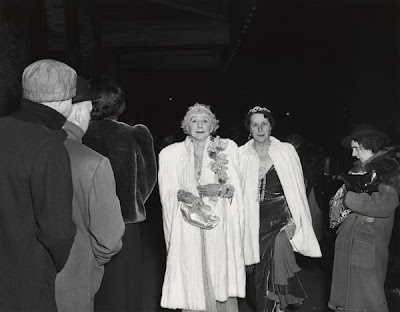 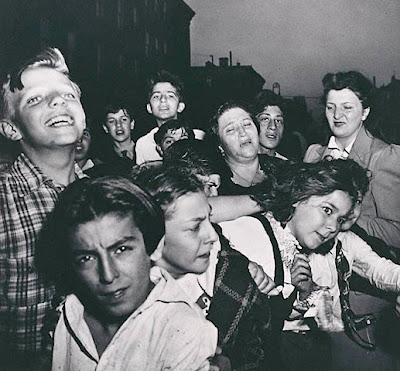 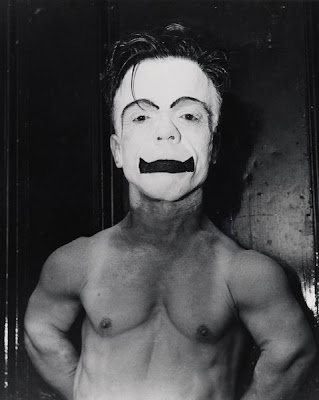 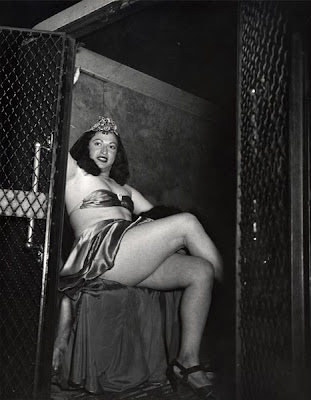 Transvestite in a Paddy Wagon (Weegee asked him to pull up his skirt)
Photography has become a difficult way of making a living. It's hard to find assignments, hard to find motivation for personal work. It seems as if the easier it has become to actually take a picture, the harder it has become to find a setting for that picture, like PM or even Life. The interweb is still no substitution for a great shot on a printed page.

Weegee is an inspiration. Prowling an amazing city at night, showing us an uncompromised vision, a whole way of seeing peculiarly appropriate for THAT city at THAT time, like Bellocq's Storyville photographs. What a gift.

And if he couldn't keep at it forever, well... so what? After awhile, even Chuck Berry stopped wrtitng songs. Genius is easily demurred- it's a fragile construct at best. 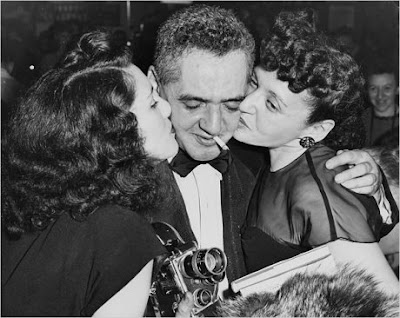 Posted by Bret Littlehales at 9:21 AM

My father used to have a book of Weegee photos. The contrastiness of the b&w photos was shocking, like jumping into a pool of cold water. I always thought that life in the 1940s was just like that - black & white and sharp-edged. He was awesome.