Johnny Puleo on the Wall 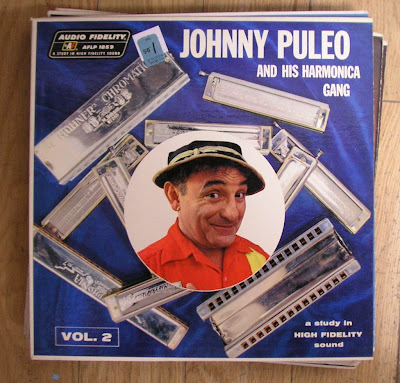 Yesterday I bought a corned-beef sandwich from Wagshal's Delicatessen, a high- priced pseudo- deli here in Washington DC. Whew! That's a lot of hyphenated words, even for me!

This deli is the type to put celebrity photos all over the walls, and since it's in DC, most of the celebs are politicians, or Art Buchwald. So there's pictures of the Bushes (both), Nixon, Ford, etc. It's very republican. Wedged between faded color portraits of Nixon and Ford is, amazingly, a faded B&W photograph of DC native Johnny Puleo.

Johnny Puleo (October 7, 1907- May 3, 1983) was born and died in Washington DC. To be more accurate, he died in Holy Cross Hospital, here in Silver Spring MD, where I sit writing this blog.

He was technically a dwarf, as opposed to midget, and was familiar to audiences first as a member of Borrah Minevitch's Harmonica Rascals, then as the frontman of his own group, the Harmonica Gang. As a kid I used to see him on the Ed Sullivan Show and the Hollywood Palace.
Here's a great clip with Milton Berle:
﻿﻿http://www.youtube.com/watch?v=fLbCXeVVMF0

He usually wore a strange cowboy- like costume, with chaps and little holsters sans firearms. He also wore a little hat that could have been a child's cowboy hat at one time. Very curious. 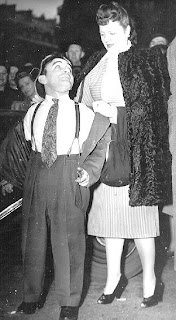 Like many diminuitive people, he was able to evoke both comedy and pathos in the course of his act, which involved a lot of pretty cruel slapstick, especially during his association with the Fagin- like Minevitch, and an equal amount of virtuoso chromatic harmonica playing. Here's another clip from Springtime in the Rockies with John Payne and Sonja Henie:
http://www.youtube.com/watch?v=7AVVad2xmY4

Puleo, who joined Minevitch (I've seen it spelled with one "n" or two) as a teenager, signed a contract that Minevitch interpreted as virtually lifetime. Every time Johnny tried to break away and start his own group, Minevitch would hunt him down and bring him back into the fold.

Johnny was underpaid and ill- treated from several accounts. When Minevitch died in Europe in 1955, either of a heart attack or from being deliberately pushed down a set of stairs, Puleo was finally able to start his own group, which he called the Harmonica Gang.

He went on to work prominently in Las Vegas, and other resort towns and on television. 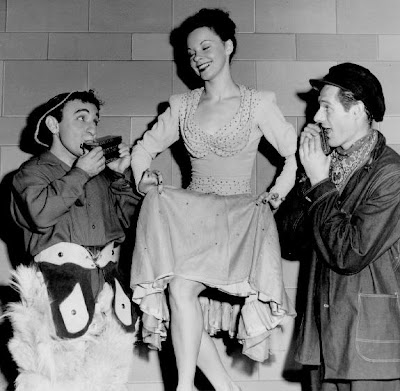 He pretty much duplicated the Minevitch act, slapstick and all. He also set a precedent for many harmonica acts, that of the use of a little person. Minevitch employed another little person in the alternate "Rascals" (there were several touring "Harmonica Rascals" at the time of his death) and a British harmonica group, Morton Frazer's Harmonica Gang featured "Tiny" Ross, and evidently influenced the Beatles, mostly John Lennon.

So how did Johnny Puleo end up on the wall of a Spring Valley deli? I'd like to think that perhaps Sam Wagshal was a harmonica afficiado and offered Johnny free latkas for life, but that's most likely not the case. The place is no longer owned by the Wagshal family, so we'll probably never know.
Posted by Bret Littlehales at 8:43 AM

not to change the subject, but how was the corned beef sandwich?

who would put cardboard in a sandwich!

Hi My Uncle was Stan Kaye of the Morton Fraser and His Harmonica Gang, A nother member of that gang was Henry? living in the USA and still playing a few gigs. I wonder if they knew each other.