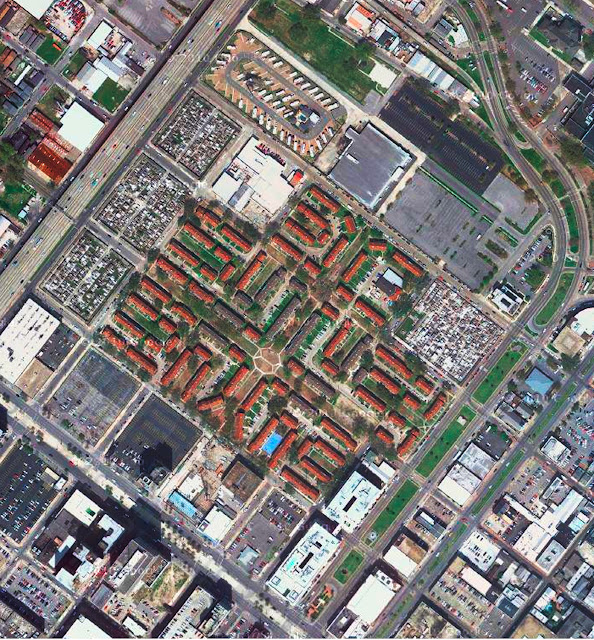 This is Storyville in New Orleans, with thanks to Google Earth.

Or more accurately, this was Storyville. From 1898 until 1917, Storyville was host to the largest, and only, area legally set aside for prostitution in the United States of America.

In what was possibly the strangest social experiment in our nation's history, the city fathers of New Orleans set aside this tract of land, bordered by Basin, Canal, St. Louis Streets and Claiborne Avenue in an effort to confine vice to one single, intense area. Oddly enough, it worked.

In the map above, we see the area still surrounded by cemeteries, St. Louis #1 and #2
(on the upper part of the picture). St.Louis # 1,  on the right side of the development (now a  site of low- income project housing), hosts the graves of Voodoo Queen Marie Laveau, and Rhythm and Blues singer Ernie K-Doe among others. This is pretty much all that's left of Storyville today.

The green spots in the middle of the streets are the neutral ground, or the grassy area dividing Basin. In it's heyday, Storyville hosted a train station, where gentlemen travellers were met by "steerers" who would entice them to the bordellos.

This map, from Al Rose's magnificent history of Storyville, Storyville, New Orleans, shows approximately where everything was.

Everything about Storyville, or the District, as it was known, is fascinating. In many ways it is the beginning of the legend of New Orleans as the vice capital of the US, not to mention the cradle of Jazz, whose rise to prominence coincided with the rise of Storyville.

Jazz was played nightly in the District, by Jelly Roll Morton and Tony Jackson in the bordellos and Joe "King" Oliver in the saloons, among others. Killings were routine and yet crime on Basin itself was kept to a minimum by vice- king Tom Anderson, an oil executive who functioned as the "mayor" of the District. Certainly the city has had worse mayors.

The art of the great photographer E. J. Bellocq flourished in the sporting houses, and it is his photographs of nude and clothed prostitutes, as lovingly crafted as Roman statues,  that provide much of the mystique and romance that haunts New Orleans today.

I'm going to New Orleans later this month, and I will be making a pilgrimage, as I always do, to St. Louis Cemetery #1. If I sit there long enough, I can begin to imagine myself on the edge of the great experiment.
Posted by Bret Littlehales at 5:26 PM

As long as I credit you in my paper, I'm writing a paper on Storyville for my Masters degree. Could I use your aerial photography for it?