I found this online- a six issue run of Juke Box Comics.  I'd never heard of JBC before, and, evidently, neither has anyone else, as there is little information through the usual sources.

According to the inside cover, the six issues were published by Famous Funnies Comics, located at the auspicious- sounding 500 Fifth Avenue, NY, 18, NY. The Grand Comics Database lists the publishers as Eastern Color. They were published in 1948.

Here is the cover to the last issue, number 6: 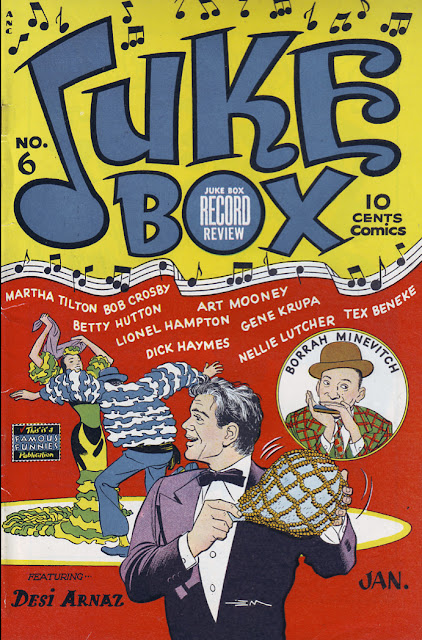 Wow! Not only do we get a story on Desi Arnaz, son of Cuban aristocrats, but look- -there's Fagin-esque harmonica player and Johnny Puleo exploiter Borrah Minevitch!

The art is overall, uh, well, third rate, despite an early appearance by Alex Toth, who signed his artwork "Sandy" Toth. There's also a Fred Guardineer story, but it's pretty bad.

However, each comic has at least one feature on an African- American artist, that, at least to my ear, treats the artist with same respect as the other entertainers.

They are no more caricatured than the white entertainers (in fact, there's a Betty Hutton story drawn by someone who clearly hated Miss Hutton), no big white lips, no googly eyes. No dialect. 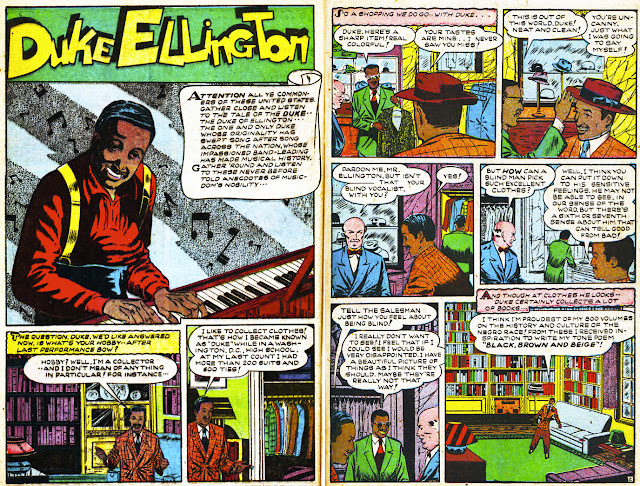 So Duke had Al Hibbler help him pick his clothing? Who would've guessed? I also like the way he mentions my hometown, Washington, DC. 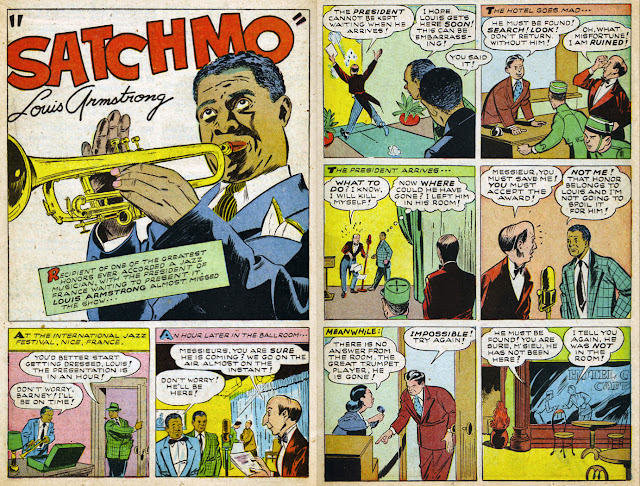 Good old Barney Bigard- it's Louis' award and no one going to get it but Louis! "Messieurs", says the French attache, in obviously phonetic French. Later on they use the contraction,"M'sieu" correctly. Strange.

Don't fret, dear reader- Louis is found safe and sound- he was just doing a little jamming with a French musician he heard through a hotel room door. 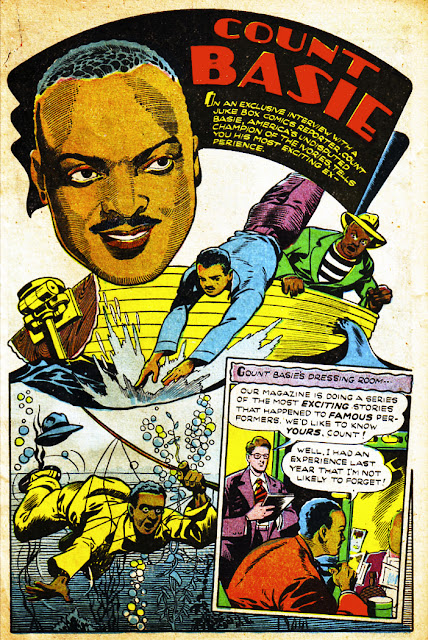 Here, Count Basie saves his trumpet player from drowning during a fishing expedition near Atlantic City.

Who was the trumpet player? Buck Clayton? Snooky Young? Ed Wilson?
I can't find any online confirmation of this story.

The payoff is that Basie is able to break the fishing line because his hands are so strong from- you guessed it!- playing the piano! 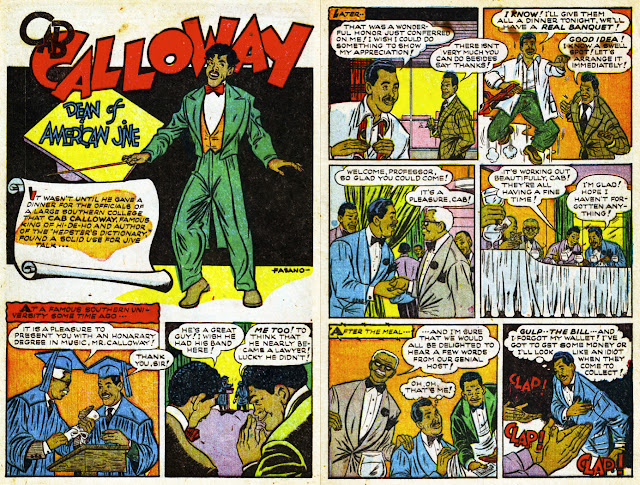 In this one, Cab is able to send his valet for the money without the college bigwigs catching on, because he tells him in jive! Only the professor of languages realizes what's happened, because jive is evidently a language all its own.

I'm reprinting this last one in its entirety because a) it's actually fairly accurate, b) I like the unselfconcious interaction between Mr. Hampton and the white people in the story and c) it manages to include Brenny Goodman and Louis Armstrong. It's very refreshing, given the times. 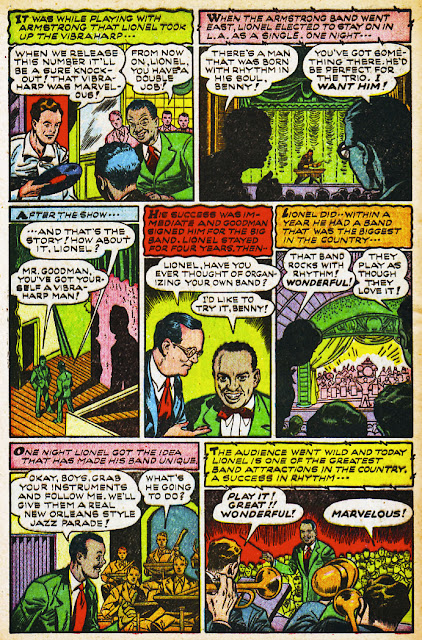 I'd like to think that the audience for these stories were white and black middle class teenagers and that the comics sent out a positive message. I've always felt music (and everything else) should be above racist concerns, and evidently, so did the mysterious creators of Juke Box Comics. At least for six issues.
Posted by Bret Littlehales at 5:55 PM

Bret you just jogged my memory. I inventoried the first issue of this for the Library of Congress. It has a picture of Spike Jones on the cover but doesn't come anywhere near the promise that seems to entail. You're right, it is an interesting title but with mediocre art, setting a precedent of sorts for music comics to come. Revolutionary Comics did worse in the 90s with their passable and sometimes downright awful rock 'n roll series.