David Honeyboy Edwards, the "Last of the Great Mississippi Delta
Bluesmen" has died. This morning Monday August 29, 2011, about 3 am
while resting peacefully at home, Honeyboy moved on to blues heaven. He
lived a long, full life, and he felt at peace. He loved to say, "The
world don't owe me nothing." Just shy of his 96th birthday, Honeyboy
played his last gigs at the Juke Joint Festival and Cathead
Mini-Festival in Clarksdale, Mississippi April 16 and 17, 2011.

Prior to his health turning for the worse in late April, Honeyboy was
scheduled to play numerous gigs in Chicago, across the USA and in
Europe, including today at Millennium Park in Chicago for the noon time
concert series. His manager Michael Frank had to cancel all those dates
due to Honeyboy's declining health. He maintained a strong spirit until
the end, telling stories and showing off his dexterity in his hands.

Visitation will be Thursday September 1 from 6:00 pm to 9:00 pm, with an
open mic for comments by his friends and fans from 7:00 to 8:00 pm at
the funeral home. Services will be private on Friday September 2. 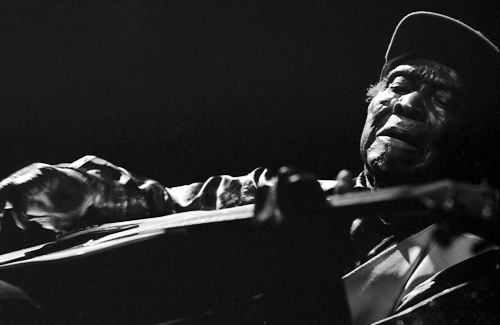 David "Honeyboy" Edwards was, until 3AM this morning, the last man standing. And he knew it too.
Posted by Bret Littlehales at 4:59 PM No comments:

...Irene came and went, leaving us none the worse for wear. Lost power, got it back.

Lots of little twigs on the ground, some branches dented my wife's car, but all in all, we were very lucky and, for that, I am grateful.
Posted by Bret Littlehales at 4:43 PM No comments:

6:10AM, Silver Spring, MD. My wife and I just dropped our youngest daughter at the Amtrak station so that she could catch a train back to Philadelphia and her husband. I'm about to put the seats back in the Caravan- the ones that have sat all summer on the front porch. I vacuumed out the French drain in the outdoor stairwell and got everything valuable off the floor in our flood- prone basement.

We'll lash the trash cans to the front porch railings with bungees, and I'll overturn our grill in the backyard to keep it from blowing away.

I'm counting on a power failure, so I've charged up my cell phone and my laptop, for all the good that will do me. If the power goes, so goes the WiFi.

This is a fraction of what my friends in New Orleans do almost every year since 2005 and Katrina. The Freeman- Archers (not their real names) have permanently packed boxes in the foyer under the stairs with candles, batteries and flashlights. I've seen them. In fact, I bet those boxes are there right now.

Irving Banister parked his car at the post office near his house in the Uptown section of New Orleans the night before Katrina broke the levees. When he returned a year later, his car was gone, along with everyone else's, stacked like brightly colored metal logs under the I-10 freeway.

Of course, it won't be that bad. Katrina was the storm of the century, at least to the people of the Gulf Coast, and certainly in terms of lasting impact to everyone in the United States.

But it will be more intense than I'd like. We'll be fine, along with the rest of DC. But what about my father, sitting in his house with my stepmother there in Keller, VA on the Bay? And my daughter in NYC, in her tiny apartment she shares with her fiance near Columbia. We asked her to come home, but she said she would be okay. I have no choice but to believe her. My sister asked my father to come stay with her in Charlottesville, but, again, he said they'd be okay. I wish I was that confident.

It's supposedly going to be sweet and sunny here by Sunday afternoon. We may be powerless by then but I bet the air will be wonderful- scrubbed clean by Irene, the chambermaid of hurricanes.

Just seems a little apocalyptic that we'd have an earthquake (really weird feeling, that) and then a hurricane. Like we're borrowing someone else's natural disasters. We are generally panicked, calm, unprepared and over- prepared.

Here are two pictures that did not make the POTD blog, but I liked them enough to publish them, so:

Posted by Bret Littlehales at 11:32 AM 3 comments:


Robert Johnson, blues singer, composer, guitarist and enigma, died on August 16th in 1938, seventy- three years ago, in Greenwood, Mississippi. Many people believe he is buried in a pretty little cemetery just outside Greenwood proper, on the Money Road.

A river runs near his plot, and a large tree shelters it. Fans leave flowers and coins, mostly pennies, on the gravestone. The stone has a reproduction of a note he wrote to his sister before he died. The note says, "Jesus of Nazareth, King of Jerusalem, I know that my redeemer liveth and that He will call me from the grave."

This from a man who wrote songs in which he walked with the devil.

Whether Johnson is under the earth at this cemetery, or in any of the three other spots purporting to host his remains, is immaterial, really. What is important is that he did exist, that he wrote these songs which gained in popularity throughout the years, songs that arguably became the prototype for the Chicago blues movement and subsequently the birth of Rock music. "Dust My Broom", Sweet Home Chicago" and "Crossroads" among others, are probably being played in some roadhouse or bar in the world even as I write this. I visited an Amsterdam coffee house and heard his recording of "Hot Tamales" in the midst of hashish menus and faux Moroccan decor.

I felt right at home.

...what I wanted to write about. It was brilliant, I remember that much. A great idea; came to me while I slept.

Oh well.
Posted by Bret Littlehales at 5:18 PM No comments: