I love gumbo. Especially the Cajun kind prevalent in New Orleans. The best gumbo I've had so far was in New Orleans, at Commander's Palace. The second best was from a Korean lunch counter on N. Carrolton.

My friend Mark decided around six months ago to learn how to make gumbo. So far, I've attended two gumbo sessions at his house, and can attest that the second was an improvement (not a vast improvement, but an improvement still) on the first. I think the difference is the roux.

The roux. Of course, that's always the thing in gumbo. Making gumbo, at least in New Orleans, is a huge point of pride. Family recipes are guarded tightly, memorized and never written down, passed along maternal lines, etc. The most popular is the kind with sausage and shrimp, my personal favorite. But anything will do. It's a gumbo- a mixture of ingredients, the great metaphor of race and culture in life. And all good gumbo starts with a roux.

The first gumbo Mark made used the oven method to cook his roux. I saw this originally on the Food Network. Alton Brown used this as his foolproof, go- to, never fail, works great every time method. In short, you bake the oil and flour for around two hours.

And I have to say it was one smooth roux. But hey- two, maybe two and a half hours? No matter, though- the gumbo was just fine.

The next time, however, was near perfection. This time he used butter and flour and tended his stove very closely. After twenty or so minutes he was preciding over a fine sauce, into which he began ladling broth.

About an hour later we were eating Mark's Andouille sausage gumbo. No shrimp this time, but no matter- a gumbo to make a man proud. I ate three helpings.

Today I watched Chef John Besh make his signature gumbo, a combination of a family recipe with that of an early mentor d' cuisine. Chef Besh use cooking oil for his roux. And let it get a deep brown. He made it look easy, which it is, I guess. To him.

Two Christmas's ago I was in New Orleans (see: Xmas in a Primitive Land) and all the bartenders and little dive managers were making gumbo on hot plates in the back of the venue. "Taste this" they'd say. "What do you think?"

It all tasted great to me, and I told them so. What could I add to someone's great aunt's maid's recipe?

I hate the prevalence of the term "bucket list", but that's the boomer generation for you. Those of us who grew up in the era the Dymo labeller feel compelled to use it on everything. But I sure would like to master a good pot of gumbo before me+ death= no more gumbo.

And, by good, I mean, like "Hey, Bret's having gumbo tonight! Drop everything, gang!" type of good. 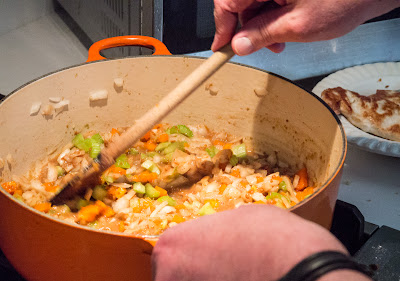 Posted by Bret Littlehales at 2:49 PM No comments: