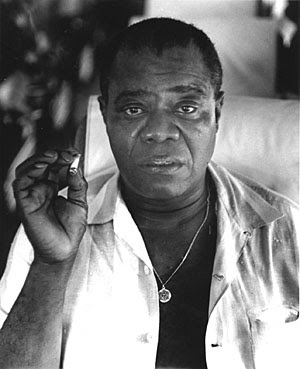 Yesterday was my brand new grandson's birthday, and today is Louis Armstrong's birthday. Coincidence? I think not!

Louis's story is so complex, so miraculous, so archetypal that some of it has to be accepted on faith. Louis died thinking he had been born on the 4th of July 1900, and only recently was it discovered that he was born on this date in 1901. His unmarried parents were very poor, and he lived with his grandmother early in his childhood. His mother, Mayann, a remarkable figure, eventually took him back and he shared a bed with her and his sister Mama Lucy during his adolescent years. I've never found out why his sister was called Mama Lucy.

He grew up on the streets of New Orleans, in a decidedly criminal milieu, during the time of Storyville. His idols were hoodlums, hustlers, petty thiefs and musicians. His nature seemed to be a combination of lovable waif and seasoned street urchin. I think he maintained that balance in a more mature form for the rest of his life. He worked hard for a Jewish family who hauled and collected junk. He wrote and thought about them lovingly for the rest of his life.

When he was eleven years old, he went to jail for discharging a loaded gun on New Years Eve, and was sent to the Colored Waif's Home, which he definitely was.

After reluctantly leaving the Waif's home (he loved it there), he began his apprenticeship as a musician, playing in local bands, marching in funeral processions and parades and generally honing his craft even as he soaked up the music around him like the sponge he was.

Eventually he rose to the top of the local heirarchy after his friend and teacher King Oliver left for Chicago. 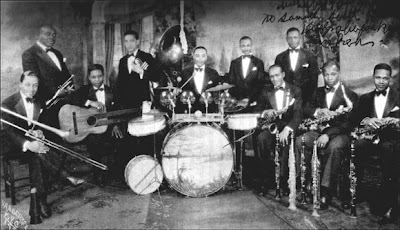 King Oliver's Orchestra: Oliver standing first on left
He replaced Oliver in the band that the King had left behind, and then got a job with Fate Marable's steamboat orchestra which gave him a taste for travel. 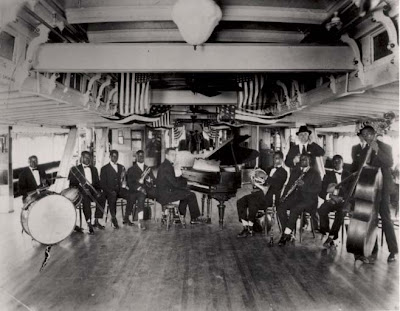 His fellow musicians taught him how to read music, and he also learned how to play to please white people toward whom he amazingly felt little or no ill will. At least, he learned to effectively hide any ill will or anger he may have felt. 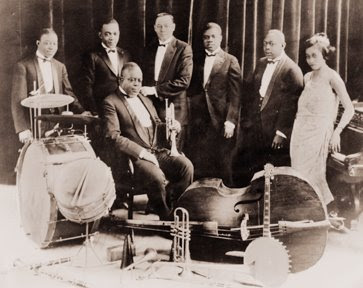 From there he went to Chicago, had considerable success, recorded a group of great records, established himself as the first bona fide soloist in jazz and popular music, went on to New York, changed how everyone played and sang, etc, etc. It's an oft- told story. Here's the thing about Louis' life: every event has a lesson. There are no inconsequential moments in his story. Furthermore, each event contributes to the uniqueness of his story. He's born in New Orleans during the amazing era of Storyville and the transition of ragtime to jazz. The junk haulers give him a battered bugle. He learns to play cornet in the Waif's school, and is mentored by the music teacher there. (The Armstrong story is filled with mentors, likely and unlikely.)

Louis's story is like the birth of the one planet that will eventually sustain life through an incredible set of unrepeated circumstances. Louis Armstrong is like life on Earth- what are the chances? Billions and billions to one. 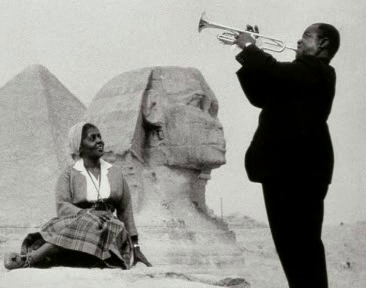 He is indisputably the single most important figure in the history of jazz and therefore the whole of American popular music. 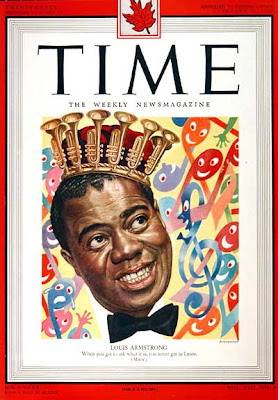 Posted by Bret Littlehales at 11:36 AM

amazing blog entry! This is very informative and entertaining as well - you should really submit this to Huffington or CNN or some outlet where they accept blog postings.

I have an early memory of you telling me about Louis Armstrong and his going to the Waif's home. I sometimes wonder if Charlotte, Rebecca, and I were the only children in the world fortunate enough to be brought up on stories of musicians and the remarkable aspects of their lives.