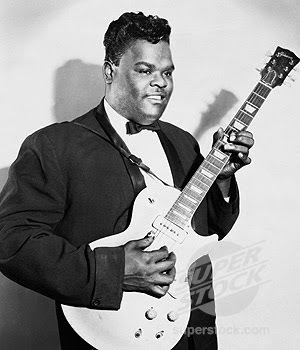 Back in the mid- sixties, my coming- of- age era, young white people discovered blues. Thanks to the influence of the British rock groups that proliferated at the time, mostly The Rolling Stones, white America was introduced to great artists like Muddy Waters and B. B. King, and not a moment too soon.

Muddy's best days were just about over, especially after a debilitating car accident in 1970. B. B. King was at his peak, playing fifteen or more choruses of slow blues as his audience swooned. Albert King mastered the politics of the rock concert arena (see my blog "Happy Birthday, Albert King," April 25, 2009.)

The list goes on, and blues artists who had formerly recorded on tiny independent labels and were making $15- $30 a night in smokey clubs playing to audiences of ten or eleven found themselves playing to thousands and making hundreds of dollars for their efforts.

Which brings us to the Texas Cannonball, Freddie (or Freddy) King (September 3, 1934, to December 28, 1976). Freddie was well- known in the R n' B community for his guitar instrumentals recorded for Syd Nathan of the King label in Cincinatti, Ohio. If you wanted to be a guitar hero, you had to learn Hideaway, King's biggest hit. Eric Clapton recorded Driving Sideways on John Mayall's first record, and more people were turned onto Freddie King.

In addition to his great guitar playing, he was an excellent singer and a great performer. A DVD recently released of his appearances on The Beat!!! television show out of Nashville in the early sixties shows a suave, poised giant at the top of his game. 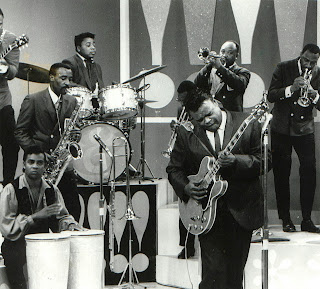 King left the King label in 1966 and then signed onto an Atlantic subsidiary, Cotillion. Two albums produced by King Curtis sold indifferently, despite a fine session band including the great Jerry Jemmott on bass. Luckily for Freddie King, however, he had been discovered by the white audiences, mainly because of Eric Clapton's proselytising. Clapton loved King's music, and regularly performed Have You Ever Loved a Woman at his shows.

He would begin a rigorous touring schedule that included Bill Graham's Fillmore Auditorium. Former Shindig back-up musician Leon Russell signed King to his Shelter record label, and Freddie recorded several influential albums, which, though not as brilliant as his King work with Syd Nathan, were very solid musically. His Going Down became a garage band classic.

He toured extensively with Russell, and their shows would end with a (staged) guitar duel, that somehow Russell always won despite the fact that Leon was actually a pianist with moderate guitar chops and Freddie King was one of the three best urban blues guitarists in the world. Nice one, Leon.

He ended up on RSO records with his biggest fan, Clapton.

Freddie King had made the transition from the chitlin' circuit to the rock palaces of the world. His schedule was rigorous, as if he were living on borrowed time. On December 28th, 1976, he died of complications from ulcers and peritonitis. He was 42. 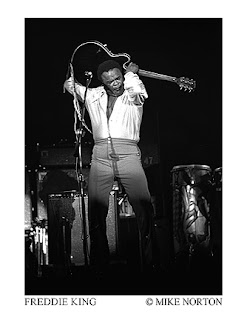 Seeing him perform in The Beat!!! is a revelation. He is, simply, as good as it gets: big man grace and style (he must have been catnip to his female fans). He uses a thumbpick and a finger pick on his index finger on his Gibson 335, and his lines are incredibly fluid. His singing is sweet and soulful. It's amazing that he was not thought of as a vocalist until later in his career.

Last night, at the blues jam that I run every Thursday, we had a surprise visit from Eugene "Hideaway" Bridges, in DC for a big show this weekend. I thanked him for coming and mentioned that it was Freddie King's birthday. "I know, man," he said. "I got his guitar with me." He pulled out a beautiful brown Gibson 335 and played a short set. I thought, wow. Freddie King's guitar. Is Freddie here somewhere? Well, the answer is always yes. All those beautiful cats who played the music I grew up on, they're all here all the time. It's subtle and mysterious mostly, but sometimes they send their guitar to your gig on their birthday and it kind of kicks your ass. Thanks, Fat Daddy.
Posted by Bret Littlehales at 7:05 PM

Mr. Littlehales: Thanks for remembering this great blues player. As a cocky young man, I listened over and over and over, trying to emulate the smoothness of his playing on "I'm Tore Down" on my knockoff stratocaster. Never came close. I remember listening as well to "Have You Ever Loved a Woman?" imagining I understood. Years later, I understood much better about trembling in pain, and began to realize all over how great he was.

Nice stuff Brett. The recently issued Bear Family box has everything he recorded except the RSO sides. James Booker played keyboards on one fo the albums. The first Cotillion album was not helped, imho, bu placing all the instrumentals together, but I do believe they were highly underrated. With Shelter Freddie also helped revive Jimmy Rogers career. The live sides of Clapton and King together are the first sides by Clapton that I really enjoyed.

So on my new quest to be a guitarist, this is one I should listen to? Thanks for this, it's beautifully written as usual.

Wow, what an amazing cosmic story. Beautifully written and informative as always, and that part at the end just blows me away.

Nice bio of Freddy King. Sorry I only just read it today (Sunday); I missed the birthday!

Your blog was recommended to me by a mutual friend, Mike Dutton. I'll be a regular now. Thanks for doing this.

Hummer Sent Me I'm in!