I found this photo on Ebay a couple of months ago: 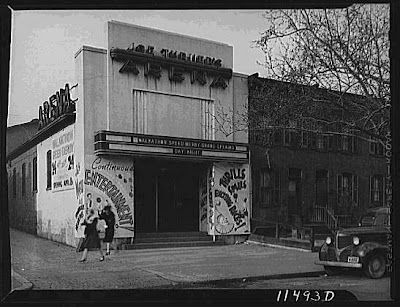 It's a picture of Joe Turner's Arena at 14th and W Streets, NW. Mostly a wrestling venue, it also functioned as a boxing arena and training gym, and a concert hall for a wide variety of music acts.

Founded in 1935 by promoter Joe Turner, not to be confused with blues great Big Joe Turner, the place plays an small but interesting part in the mythology of the Littlehales family.

While most of his fellow students at his high school were playing baseball or working on cars in their spare time, my father Bates Littlehales decided at the age of sixteen to hire out as a sparring partner and began to train at Turner's, an interesting choice of after- school activity for a upper- middle class private schoolboy. This must have been in 1941 or '42.

Here he talks about his time at the arena:

He still takes obvious pride in having learned to box. Although he never fought professionally, he used to think of himself as having been semi- pro.

The people he speaks of are long gone, I assume. There is no mention of Piccolo Smith in any reference to Turner's online. Sammy Thompson never became a famous fighter and there are no references to him either.

I did find a picture or two of Man Mountain Dean. Here he is with Primo Carnera and the Angel, two other prominent wrestlers of the time. Dean is on the bottom. I have no idea who the two women are. 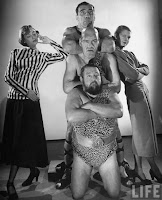 The Angel and Man Mountain appear to be wearing some type of jungle garment. Perhaps they killed the leopards themselves, a la Tarzan who used the illegal full- nelson hold on feline predators. Probably not, however.

Eventually Turner's Arena changed hands and was ultimately acquired by Vincent McMahon, Sr., the father of the current owner of the World Wrestling Entertainment franchise. Sr. changed the name of the venue to the Capital Arena and kept it until 1965, when the property was sold, and eventually torn down.

Today 14th and W Street is part of the great 14th Street revival, and where Turner's once stood is, of course, a CVS (like almost every corner in Washington DC.) 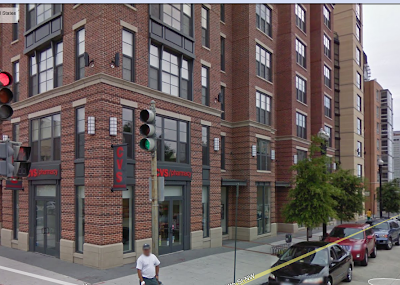 Posted by Bret Littlehales at 3:23 PM

Thanks for the photos, history and video, very helpful with my family history project. I'm one of Joe Turner's kins, that only now knowing about his life and times. Thanks again , Perry

The arena was not where the CVS is now it was on the other side of the street. I grew up on W Street.Thanks for the info I love reading about the old block

Thanks for the photo. Just begun searching family history. Found 1943 Times Herald news article by Joe Holman. George King, Bus.Mgr. for Joe Turner Arena was in Turner's office when he received news that his son, Preston King, had completed his flight training and was 2LT, Army Air Corps. His joy was short lived, however, as Preston's plane crashed in Latin America, and he was killed.
Life happens to people and buildings, it seems.
Thanks again for the photo.
L. Baker

Thanks for the picture. Joe was my Great Uncle. Any more info you would have on him would be apreciated. By the way my Great Aunt, his wife passed away last year.

Sorry he was my Great Great Uncle. His son passed away a few years back.

This paragraph is in fact a pleasant one it helps new net visitors, who are wishing in favor of blogging.