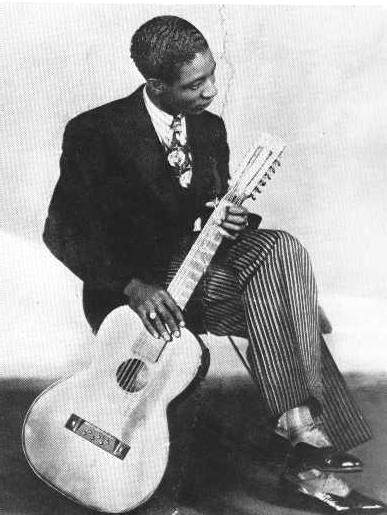 February 8th, 1894, is the birthdate of New Orleanian Lonnie Johnson, one of the greatest of the early jazzmen and seminal guitar player.

Johnson began playing violin at an early age and added piano and mandolin to his skills. In New Orleans at that time, music studies were encouraged in the African American communities and many students played more than one instrument. 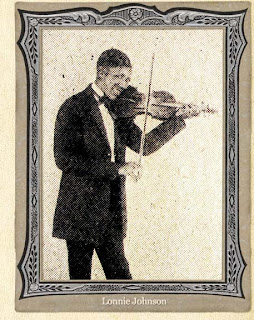 Johnson played in Storyville and, like Louis Armstrong, joined Fate Marable's orchestra on the Steckfuss brothers' riverboat line.  He went on to tour Europe, returning to play in Armstrong's Hot Five recordings, and is on the original 1927 recording of The Mooche by Duke Ellington. His recording career at this point reads like a who's who in blues and jazz: Bessie Smith, James P. Johnson, and Roosevelt Sykes among others.

Robert Johnson (whose father's surname was Dodds, then Spencer) reportedly chose his last name as a tribute to Lonnie.

He achieved his greatest commercial success in the late 1940's/ early 1950's with a series of smooth ballads. His recording of Tomorrow Night for Syd Nathan's King Records (later the home of James Brown and Freddie King) sold over three million copies. He was better known for his crooning than his guitar playing at that point, but today it is certainly the guitar playing that has made him a jazz/ blues immortal. 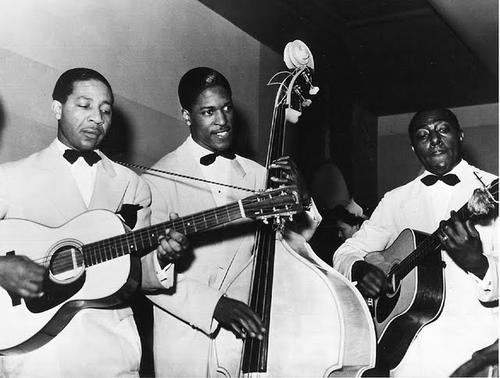 Despite his successes, he fell on hard times in the late '50's, and was rediscovered working as a maintenance man in Philadelphia at the Benjamin Franklin Hotel. Evidently, he wore white gloves to protect his hands, but otherwise kept a low profile. No one knew the janitor was once a superstar in jazz and rhythm and blues.

In the last decade of his life, he once again toured Europe, made new records, mostly LP's for folk or jazz- oriented labels and was reunited with many old sidemen from his youth, notably former Ellingtonian Elmer Snowden, with whom he recorded a very successful comeback record.

My favorite Johnson recordings are the duets he made with fellow guitar virtuoso Eddie Land. These duets, which usually feature Lang on rhythm and Johnson on lead 12- string have a bounce to them that make them sound completely contemporary. Just incredible. Here's Deep Minor Rhythm Stomp:

Once again, I'm reminded of the rich contribution to American music from AGC, New Orleans. Maybe it's the water.
Posted by Bret Littlehales at 12:43 PM