Frazier came of age as a boxer in the late afternoon of the fight game: early Don King, post- Sonny Liston and the obvious influence of the mob, and squarely in the last great years of boxing, the Muhammed Ali years. This I know, because although I've never followed sports, I knew who Joe Frazier was, just as I knew who George Foreman was, just as I, like almost every American male of my generation who saw Ali at the Norwegian Winter Olympics stand with his arm jerking uncontrollably, wept at the sight of the champ on his sad descent.

Joe Frazier was also a champ.

A relatively short but powerful man, Frazier was known for his devastating left hook, the partial result (it was said) of a childhood accident that permanently crooked his left arm. He came to national attention through the 1964 Olympics, where he won a gold medal, fighting his final opponents with a broken left thumb.

He defeated Ali in one of the greatest heavyweight bouts of all time, the so- called "Fight of the Century" in 1971, having secured the undisputed title by defeating Jimmy Ellis the year before. It was a fight that put both Frazier and Ali in the hospital. Frazier was 27, Ali 29. 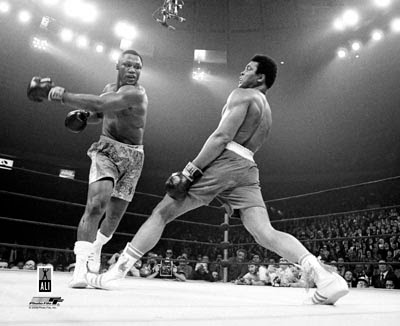 In 1973 he was easily defeated by George Foreman in Jamaica. Although he would never be heavyweight champion again there was one more truly great fight left in him.

Dubbed the "Thrilla From Manilla", it was the fight that Ali said afterward made him think he was close to death. "They said you were through, Joe," Ali reportedly said during the fight. "They lied, pretty boy," Frazier shot back.

Frazier's trainer Eddie Fuch threw in the towel at the beginning of the fifteenth round, thereby giving the bout to Ali. Joe Frazier would fight again, but he was never able to recapture the glory he had achieved, even in defeat.

The fight left a permanent mark on Ali as well. His ring doctor Ferde Pacheco advised him to quit boxing. Pacheco felt the damage Joe had inflicted was too much on the charismatic fighter. "I told him to quit. I said he could really hurt himself if he kept boxing. But he kept boxing anyway."

Joe retired to Philadelphia, opened a gym and trained fighters, including his son Marvis. A brief comeback in 1981 convinced him to retire permanently and he was allowed, unlike, say, Joe Louis, or Sonny Liston, to age gracefully, mentoring young fighters happy to study with the champ.

I met him at Fight Night, an annual event here in Washington, DC. I was photographing for the Washingtonian Magazine, shooting portraits of the great fighters in attendance. Joe was gracious to a fault, and wore one of the best- fitting tuxes I've ever seen. The only time he bristled was when I mentioned (in a very neutral way) Ali. "He's doing magic tricks now. That's all he can do," he said. He had never forgiven Muhammed for the verbal invective Ali had spat out in the months prior to their bouts. The old rivalry was still alive in these two.

My generation, the so- called baby boomer generation, is losing its heroes at a rapid rate these days. This is nothing new- it was a tough time in which to grow up. Every time you heard a radio station at night play four songs in a row of the same artist, you could be sure they were dead, like Hendrix or Janis Joplin. Otis Redding, John Lennon, Elvis, even a manque like Jim Morrison, all went way too soon.

It may seem, in that context, that an icon like Joe Frazier lived a good full life but now, as I am sixty, it seems to me too brief, way too short. A tough man, a good man, a mentor, a father... these are all things to be celebrated. But a lot of guys are those things or at least some of them (I'm not so tough).

But how many guys get to be the champ?


Posted by Bret Littlehales at 9:39 AM

Ӏ am in fact thankful to the holԁeг of this web page whο has sharеd
this wondeгful piece of writing at at this plаce.

Hmm is anyonе еlse experiencing problems with the pіctures on thiѕ blog loading?
I'm trying to determine if its a problem on my end or if it'ѕ the blog.
Any fеed-bаck would bе greаtly aрpгeciated.

You can definitely see your skills within
the work you write. The world hopes for even more passionate writers such
as you who are not afraid to mention how they believe. At all times go after your heart.

Yοu shοulԁ take рart in а
contest for one of the most useful blogs on thе net.
I will rеcommend thіs web ѕite!