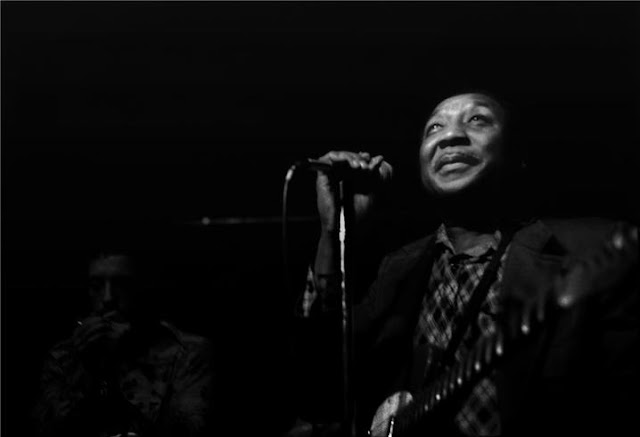 Muddy would have been ninety- nine years old today, had he not died on April 30 in 1983.

Ninety- nine years ago he was born in abject poverty, like almost all African Americans born in the state of Mississippi in 1913. He was raised to farm, to work in a cotton field, to drive a tractor, maybe to preach, certainly to take care of his family and stay in debt for the rest of his life.

Of course, that's not what happened.

What happened was that he chose a different life, a life doing what he was really good at instead of doing what everyone else did. He chose to become Muddy Waters, blues singer, and he became, simply, the best Muddy Waters there ever was or would be.

He was McKinley Morganfield (what a wonderful name!) originally, born in a cabin in Jug's Corner, MI, and raised by his maternal grandmother. He learned to play harmonica at age thirteen, then guitar from watching bluesmen like Charley Patton and Son House and from the records of local blues celebrities, especially Robert Johnson.

He had mastered the stark sound of Delta Blues well enough that by the time Alan Lomax, then collecting songs for the Library of Congress, recorded Muddy, he was already unmistakably Muddy. The Stovall Recordings (from the plantation where Muddy worked) showcase a young, poised and confident Muddy Waters singing songs he would later re- record once he got to Chicago.

Lomax made good on his promise to send Muddy a 78 recording of two of the songs so that Muddy could put the record on the juke box of his little joint in the Delta. He liked the recording. He thought he sounded good. So good that he could leave the Delta and go somewhere to make some money as a singer. Some place where there was a community of folks who might also like his sound. "I can do it," he said when he played his record, "I can do it."

He decided on Chicago. Interestingly enough, he had been to Chicago previously in 1940, but had returned to Mississippi in a kind of daze. There must have been something, however, about the record  Lomax had pressed for him that cemented his confidence, because this time, in 1943, he stayed on in the Windy City.

Once in Chicago, young Muddy began right away to make a name for himself in small Chicago clubs, house rent parties, Sunday afternoons at Tampa Red's, in short, wherever people gathered to hear the blues. He made some unreleased recordings for Columbia, was mentored by Big Bill Broonzy, backed up John Lee "Sonny Boy" Williamson and acquired his first electric guitar.

His friend Sunnyland Slim got him an audition with Aristocrat Records. His first recordings were shelved but his third session produced I Can't Be Satisfied (a remake of the Lomax sessions'  I Be's Troubled) b/w I Feel Like Going Home. This record was released and became a huge hit for Aristocrat, soon to change its name to Chess Records.


The records these men made remain among the greatest blues records ever, copied over and over, dissected and re-mixed, re- released and issued on every kind of media so far invented. They are our American Treasures, the ultimate expressions of urban blues, fronted by Muddy's all- powerful dark Delta voice. Recordings that take you somewhere, and then leave you there just long enough to know you've been and gone.

The first photographs I ever took in my life were of Muddy in 1967. I was sixteen years old and using a borrowed camera. I remember thinking, as I looked at these men, "Maybe when I'm old enough, I'll be able to play like that."

Well, I'm older now than they were then, and I'm still trying.

Happy Birthday, Muddy- you were at the beginning of everything I've ever done of value: photography, harmonica- playing, getting married, raising a family- you were there for all of it. I can honestly say you helped me become the man I am today, and damn it- I'm still learning how to play those songs! 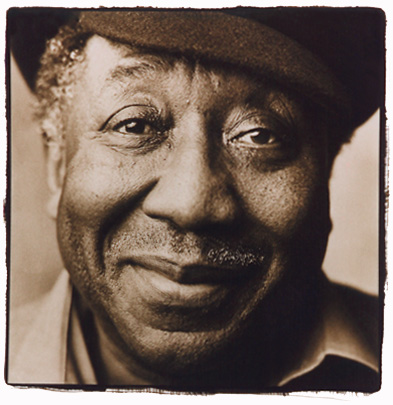 Posted by Bret Littlehales at 12:26 PM

In this case it's Mississippi.

I'm not sure exactly why but this blog is loading incredibly slow for me. Is anyone else having this issue or is it a problem on my end? I'll check back later on and see if the problem
still exists.

I'm now not sure where you are getting your info, but good topic. I needs to spend some time studying more or figuring out more. Thanks for great info I used to be in search of this information for my mission.

Hello! I simply wish to offer you a huge thumbs up for the excellent info you have right here on this post.
I will be returning to your web site for more soon.

I'm gone to convey my little brother, that he should also go to see this weblog on regular basis to take updated from latest news.