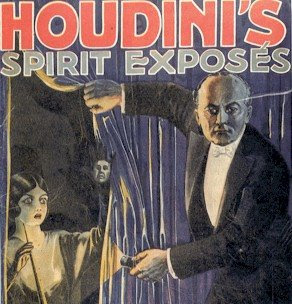 My daughter Emilie lives in Harlem, and when I visit, we try to find famous locations and see them for ourselves. I've made her look for the block where Art Kane made his famous Jazz photograph (126th Street, between Fifth and Madison) 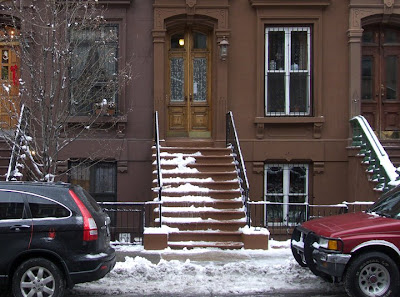 and she's taken me to the house where "The Royal Tenenbaums" (144th St. and Convent Ave.) was filmed. 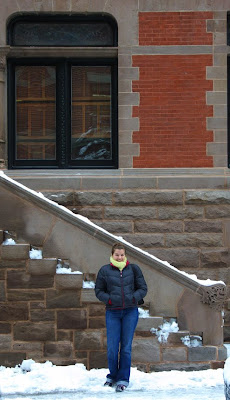 Harlem's a pretty cool place. There's the Apollo and even a latter- day Cotton Club. Certain parts can still invoke a Chester Himes detective novel, even though Himes lived mostly in Paris when he wrote them.
One place I always make us visit is Harry Houdini's house (278 W. 113th Street). It has a plaque on it, and an elegant wrought iron fence around it. In the entryway leading to the cellar, behind security bars, there's a disused bathtub with dirt in it. Almost certainly a place for seedlings, the tub seems more like a part of a failed escape, perhaps the prototype for Houdini's great failure, when he had his assistants bury him alive.
I don't know who lives there, I don't know if it has been sectioned into apartments or has a single owner and I'm too timid to find out.

I do know that when he lived there, it was Houdini's pride and joy, a major notch in his gun of respectability that, as a first- generation American (he was born in Hungary, but was brought to the US as a baby, and always claimed Appleton, Wisconsin as his birthplace), meant so much to him. I can imagine him inside, on the top floor in his library among his incredible collection of books on magic, a collection so impressive that it had its own librarian, or in his dining room room with his wife Beatrice (Bess) and his beloved mother: 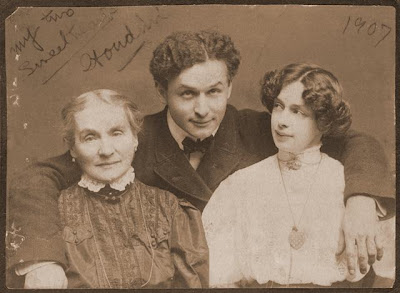 Maybe he's in the living room, preparing for the show at the Hippodrome, where he vanished an elephant, a trick whose solution has been lost to magic history. They think they know how he did it, but they're not sure. 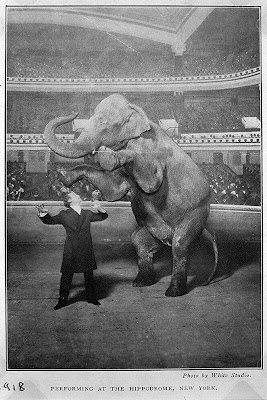 This is the house where Houdini could be just plain Harry and let his curly hair down, fire off his angry letters to magic magazines and rival escapists and plan his next illusions. A human being lived here, the house says. I like that thought.
A complex skeptic, Houdini devoted the latter part of his career to exposing bogus spiritualists. I've always felt that he really wanted to find a genuine medium, but he never did. This led to a great schism in his friendship with Sir Arthur Conan- Doyle, a writer sadly at odds with the practical manner of his literary creation Sherlock Holmes.

Houdini was one of those people who could instantly tap into a vast sea of anger. He never shrank from a confrontation and he took every slight and criticism personally. He fueled his stage act and public escapes with self- righteousness, which made his appearances all the more vital and intense. Much like James Brown (another personality with close ties to Harlem), he had a burning perfect self- concept that never let him down.
Spiritualism was very popular in the early 20th century. Once Houdini began his exposes, the pseudo- religion was pretty much finished. All the trumpet blowing, bell- ringing and ectoplasm- expelling couldn't save it. 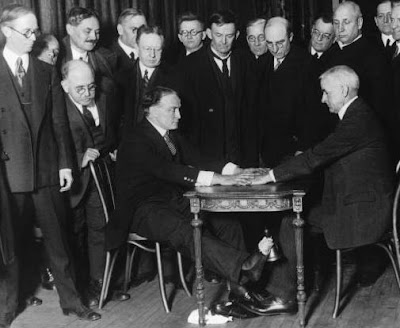 Houdini demonstrating fraudulent spiritual methods
Houdini died on Halloween from peritonitis, brought on, as legend holds, by a punch in the stomach. Recent research purports to shed new light on his death, so, much like Robert Johnson, Harry continues to keep a hold on the American imagination.

Houdini with Chaplin: the immigrant dream realized
Posted by Bret Littlehales at 6:46 PM

This is very interesting. I would say, "you should write a book about Houdini," but plenty of people already have. So it gives me another idea - you should do a book about Harlem

I walk by Houdini's house almost every day, at least once. Sometimes twice, if I walk to and from work. Every time I walk past it I think about the passage in Ragtime where Doctorow describes Houdini putting pictures of his mother all over the place after her death. I like to think of him still living in that house.

ooohh - spooky! and so awesome at the same time.

awesome! you should just write a book. about every thing you know. i would buy it.

I like the part about the tub, and the failed escape.
And I still sort of credit the ectoplasm!