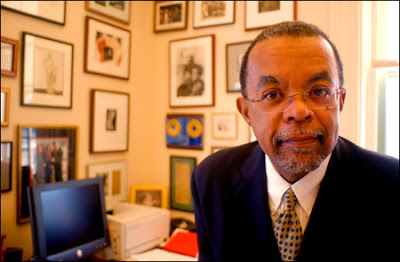 I'm stunned and overwhelmed by what I've read about Professor Gates' arrest. It seems so outrageous that it's hard to give the stories as published complete credence. Are we really still so racially bereft in this country? Apparently, if we're to judge from the television coverage and Professor Gates' interview in his blog The Root, he acted rationally and correctly, and the white policeman acted viciously and in a racist manner. Naturally, the Cambridge police claim pretty much the opposite: Gates was vociferous, uncooperative and unruly, and the police acted within correct legal guidelines.
No need to rehash the incident here as you can read it anywhere on the interweb or watch it on the TV.

What is alarming is that in all likelihood, both camps are probably correct, within legal limits. There are probably more parts to this than could ever be published, and there are probably unwritten laws broken here that can't be acknowledged by either party.

Certainly one of these is the black- man- in- a- white- world law. This is the law that says most black people are poor, undereducated, and generally live in very poor conditions, therefore the odds of one of them living in Cambridge near Harvard Square are extremely long. (Another part of this law is the now out- dated Hippie statute: if you have long hair, you probably take drugs and are probably guilty of something, so we're pulling you over. This law was apparently repealed sometime in the late '70's, around the time that hippies disappeared and construction workers began growing their hair.)

Because of the numerous times that I violated the Hippie law back in the '60's and early '70's, I'm also familiar with the Asshole statute: cops can arrest you for being an asshole. Usually they are able to provoke one into violating this law. Here's an example: when I was 17, I was visiting colleges and had a standby ticket to Pittsburgh, PA. This was in 1968. My mother and my sister had come to the airport to see me off. I had packed my wallet in my suitcase and had checked my bags. When I showed the ticket taker my ticket, he demanded identification. I told him about the wallet in the bag, and then I said, "How come you're asking me? You didn't ask anyone else."

He said that I fit the "Hijacker's profile." Apparently, long- haired white private school boys in courderoy jackets accompanied by their mothers had hijacked a rash of flights, I guess. (This has been completely suppressed by the government, because I've still never heard anything about it.)

Then a "sky- marshall" grabbed me from behind, pinned my arms back and began to haul me off to airport jail. I yelled and screamed and generally behaved like a complete asshole, thereby violating the Asshole statute.

Fortunately, my mother called her boyfriend the lawyer, and asked the sky marshall to speak with him on the payphone. The lawyer calmly invoked the Boys- Will- Be- Boys defence and I was released and allowed to board the plane.

But enough about me.

There are many defences that can evoked against the above unwritten laws. The best is, of course, innocence. Evidently, this was Professor Gates' first defence. No matter what happened, everyone agrees that Professor Gates did not break into his own home. Even if he had, that's not against the law.

When obvious innocence is evident, the police have two choices: they can apologise or they can try to provoke the innocent party into breaking some law, thereby rendering them no longer innocent. Every day (I'm guessing), the police make the first choice. They might not actually say, "I'm sorry," but they'll usually acknowledge the innocence and leave. To actually apologise takes a certain amount of sensitivity and forethought. These are not necessarily qualifications we demand in policemen in this country. Maybe in Great Britain where the police aren't allowed to carry firearms, but not here.

Most people, when provoked, fight back. Professor Gates is provoked, he fights back by provoking Officer Crowley. Officer Crowley is provoked, he fights back by invoking the Asshole law. Professor Gates is arrested. He goes to jail. Crowley gets blamed, his career is (most likely) over. Officer Crowley has made the same mistake that the policeman in Dallas made when he pulled over Houston, Texas running back Ryan Moats. Here's the mistake: important people do not get their civil rights violated.

Yup- another unwritten law: if you are in any kind of well- placed position, be it athlete, entertainer, Harvard professor, etc. and you are innocent or at least haven't done anything actually outrageously wrong (Moats didn't try to get out of his ticket, he just asked to see his dying mother- in- law) then you will receive correct treatment. The Asshole statute simply will not stick. Neither does the Black man/ white world law. Most cops know this. Crowley's mistake is that he either a) forgot or b) is an incredible racist or c) is really, really stupid. Maybe it's some combination, I don't know.

Clearly racism plays a role in this. A huge role. I can't imagine how a white burglar could be identified by a passer-by in Cambridge ("He's sticking dynamite in the mail slot, officer!"), but all this woman had to see was two black men shouldering a door.

Unfortunately for Officer Crowley, he didn't quit when he saw Professor Gates' ID. If he had just let in the obvious thought: "I'm just a policeman and this guy is a rich, entitled Harvard professor, I'd better tip my hat and back out like I would if this were Henry Kissinger."

Instead he seems to have have thought, "What an asshole. Black, too!"

And, of course, if Professor Gates had said, "You see, Officer, I do live here. It's just a terrible misunderstanding. I do appreciate that the Cambridge police keep an eye out for break-ins, though. Thanks, and goodbye," then we wouldn't have even heard about this incident. Everyone saves face. Instead, he seems to have thought, "You can't do this to me!" Which is true.

One thing I'm certain of is that we have not heard the last of this.
Posted by Bret Littlehales at 8:16 AM

This is awesome! You should submit this to the Washington Post.

I don't think The Post can print the word "asshole". But thanks!

screw them - they should just go ahead and let you tell it like it is. Hey, this is better - submit to the HuffPo. They can print the word asshole.

I heard about this on NPR last night! It's really, really interesting to me. I'm getting so sick of privileged white folk evoking the "there is no more racism, look who's President" card so in a way I'm almost glad every time something like this comes up; after all, it at least makes people who believe that kind of garbage take a moment and think about it.

I actually have a feeling that Dr Gates did give the police officer a hard time. I think, honestly, that he had a right to. I think he may have been indignant and pissed off at having to get his ID and the cop is extending that into "refused to show his ID"; I think he might well have berated the cop after proving that he was who he was, which I'm sure pissed the cop off to no end because Nobody Speaks To An Officer Of The Law That Way! at which point he decided to lure him out of the house so he could get a "disorderly conduct" charge stuck on him. Too bad Gates took the bait and followed him out.

I'll lay even money that the cop thinks he would've treated anyone like that and that race is not a factor. Pfft.

Did you hear about the swimming club in PA? That one is a mess of thorns...

You are right, Z. According to the cop, Dr. Gates did yell and say "things about (the cop's) mother." So yeah, Dr. Gates did probably give him a hard time. And you're right, the cop probably did get pissed off and took the attitude that no one talks to a cop that way, especially a (heaven forbid) black man. What an unfortunate mess. And the swim club, that's too stupid to even comment on. Where do these stupes come from?!