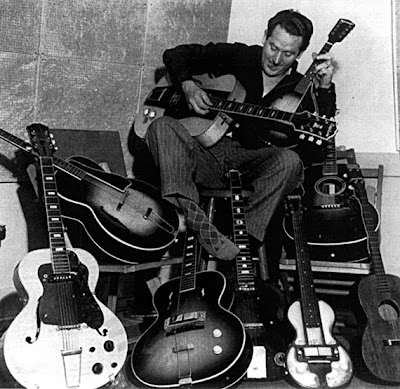 He was part showman, part huckster, all ego and all musician, the proto-typical all- American genius. Even his music was an amalgram of several styles: jazz, country, and pop, all mixed in with corny jokes, heroic stories and a great sense of supreme self- confidence. 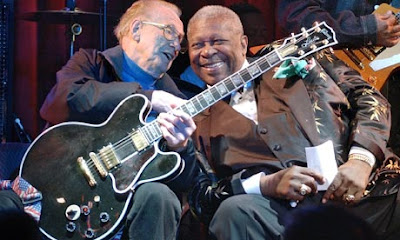 Les with fellow Gibson endorsee, living god Riley B. King
The stories: building the first electric guitar (the log, which really does look like a log- I've seen it), being mistaken for Django Reinhardt at an early gig, having his broken arm set in a picking position, pioneering recording techniques, overdubbing, and lending his name to one of the coolest electric guitars ever made.

He had lots of stories and he loved to tell them at his long- standing engagement at Iridium in New York City every Monday for years. Playing guitar and telling his stories kept Les (born Lester Polsfus in Waukesha, Wisconsin on June 9th, 1915) alive for 94 years. Like Benny Goodman, Les was able to keep playing almost to the day he died. (Benny practised his clarinet on the day he died.)

Perhaps Les exaggerated his various claims, but not by much. He was an innovator, inventor and visionary. His contributions survive him, and how many 94- year- olds can say that?

It's gratifying to see all the tributes and accolades. He deserved every one of them.


Go Mary! Go Les!
I love the cornfed poise of Mary Ford, not to mention that effortless harmony she dubs in. Are those house numbers on the fake machine? Go low tech!

Ultimately, Les Paul was able to leave as beautifully as he lived. A fitting final achievement. 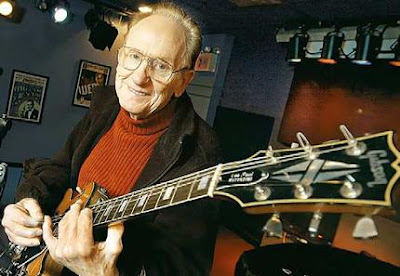 Posted by Bret Littlehales at 11:49 AM

This is a very sweet tribute. Les Paul sounds like the kind of guy you (in the general sense) would want to hang out with at a party.