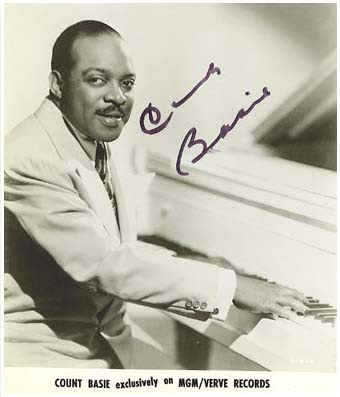 One night, effette jazz snob John Hammond is driving in the midwest, listening to live feeds on his car radio. Suddenly he hears a snatch of a big band out of Kansas City, MO that swings harder than anything he's ever heard before- harder than Duke Ellington's band, harder than Fletcher Henderson's or any of the white bands, like Benny Goodman's. Probably the only band close to it would have been Chick Webb's. (Hard to beat Chick when it came to swing.) Hammond aborts his trip and drives to Kansas City to find this band. The leader's name: Count Basie, of course! 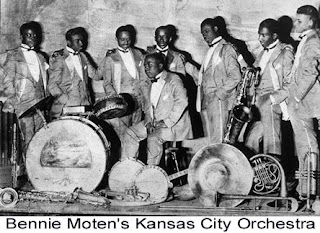 Stranded in Kansas City after an aborted tour, Red Bank NJ native Bill Basie had taken over the Bennie Moten organization, made some key personnel changes, and applied a "less is more" concept to the music that he had been honing for years. Basie's music was firmly rooted in the blues, as opposed to Ellington's, and was designed to get his audience dancing: moving, shaking and generally tearing the house down. Like Louis Armstrong, Basie's arrival was another case of right place, right time. But then again, one would expect his timing to be, well, perfect.

Kansas City, under the Pendergrast machine (the same political machine that brought us Harry Truman) was wide open: gambling, music, drugs, bootleg liquor, prostitution, etc. There were plenty of local venues for musicians, and therefore plenty of musicians came to fill the venues.

Among these was a New Orleans- born tenor sax player who had been in a band made up of his family. His name was Lester Young. 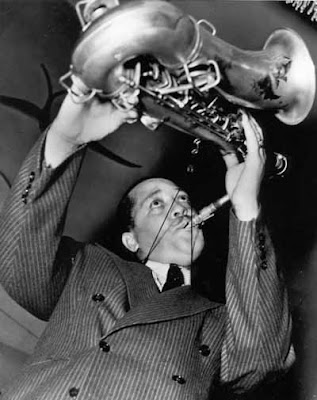 A big- voiced, big man named Jimmy Rushing filled the singer's chair.
Jimmy chows down as the Count looks on 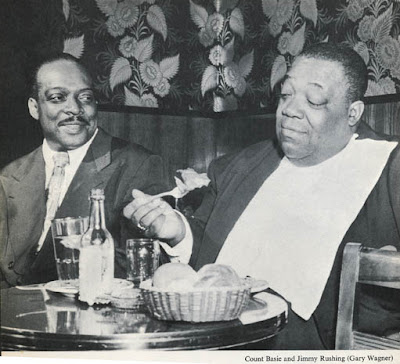 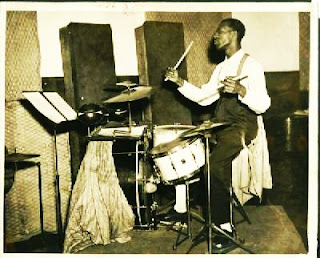 Drummer Jo Jones drove Basie's 4- beat rhythm section. Most jazz at that time was accented on two beats to the measure. Basie said, "I don't dig that two beat jive the New Orleans cats play because my boys and I have four heavy beats to a bar and NO cheatin'!" It was a different sound. What Hammond heard that night was the sound of the future.

Another major component was Basie's piano playing. He strips his parts down to the barest essentials, while maintaining an exceptional virtuosity. A few well- timed quarter and half notes are all he needs, it seems. No one else played like this. The degree of self- confidence it took to play this way is incredible. Even Louis Armstrong played more notes than Basie on his solos. Lots more.

Everyone in the band was committed to Basie's concept. There is no dead weight in his band at this time (or ever, really, although as time went on, the band's sound became far more sophisticated). Early Decca recordings of "Every Tub", "Jumping at the Woodside", and of course "One o'Clock Jump" are like unstoppable freight trains of sound. Lester Young was on his way to becoming the pre-eminent tenor player of the day, alongside Coleman Hawkins. 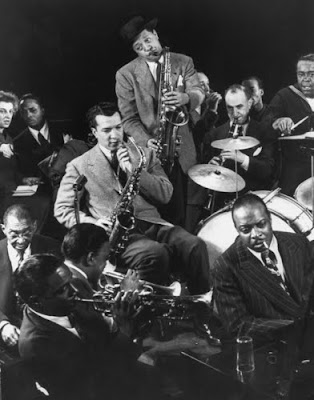 Basie on piano with Lester (standing)
Combine this with Freddie Green's rock- steady guitar and Walter Page's bass, and you have the protype for every Basie rhythm section to come.

The Count was able to maintain his big band until his death, rolling out onstage in a little scooter- chair and playing Billy Joel songs alongside the classics. I heard him play "I Love You Just the Way You Are" and then segue into "Jumping at the Woodside" a year before his death.

He used Joe Williams as his singer later on, and recorded with Frank Sinatra (not that effective) and Tony Bennett (very effective).

Red Bank's favorite son, vying only with Ozzie Nelson for this title, died in Hollywood where he has a star on the Walk of Fame. He was a beautiful cat, as they say. I wish I'd met him, but I certainly knew him.

Let's watch some videos:
http://www.youtube.com/watch?v=cbubFSgUTlM&feature=PlayList&p=2ACF1D10A78D8EB6&index=11
Hard to watch, but very rewarding, this video spotlights the band in 1938. Dig the cool uniforms, and Lester's shades!

http://www.youtube.com/watch?v=TYLbrZAko7E
I think this is post- Lester (as I don't see him) with Don Byas on tenor, but Jo Jones looks and sounds hot and the Count demonstrates his classic "less is more" piano stylings.

http://www.youtube.com/watch?v=MjdaP66PUhc
What can I say? Jimmy Rushing rules!

Posted by Bret Littlehales at 11:51 AM

once again, kudos to you for a very informative and entertaining post. Too bad more people can't get access to these! We could all actually learn something.

Where did you find those pics?!

Small beef: the definitive Sinatra record for me is the Live @ The Sands jaunt with who-else backing him.

It's a good Sinatra record but it's not as good a Basie record, if you get what I mean.

Hammond was undoubtedly an "effete jazz snob" (how could a Vanderbilt be anything but effete and snobby?) but the roster of artists from jazz through rock that he championed is overwhelming: Basie, Christian, Holiday, Teddy Wilson, Aretha, Springsteen, SRV, to name but a few and, of course, "Hammond's Folly" -- Bob Dylan probably doesn't get a Columbia deal without him.

It is quite possible (and even likely) that all of these artists would have found success without Hammond, but the fact remains that Hammond was there and lent his help.

Check out "The Producer: John Hammond and the Soul of American Music" by Dunstan Prial.

Thanks, Gray- Hammond produced a very impressive roster of artists in his career, and is an interesting story on his own.

It's appropriate time to make some plans for the future and it is time to be happy. I've learn this post and if
I could I desire to counsel you few attention-grabbing issues or advice.
Perhaps you can write next articles regarding this article.

I want to learn even more issues about it!

Pretty section of content. I simply stumbled upon your
blog and in accession capital to say that I acquire actually enjoyed account your blog
posts. Anyway I'll be subscribing to your feeds and even I success you get entry to persistently rapidly.

It's an remarkable paragraph in support of all the web viewers; they will obtain advantage from it I am sure.

It's difficult to find educated people on this subject, but you sound like you know what you're talking
about! Thanks

Here is my web site source