A Tough Week for Music

I read once that the words prodigy and genius could only be properly connected to either math or music. I'm not certain that this is completely correct, especially as pertains to genius.

I don't know anything about math. In fact, I've been diagnosed with "math indifference" which, it turns out, is fairly rare. But I do know a little about music, and within our Western concept of the chromatic scale there is certainly room for genius in all genres of music. Another thing I know about music is that not all successful musicians are geniuses and that, conversely, not all geniuses are financially or commercially successful.

This week we lost three great musicians. One, Les Paul, has been justly canonised in the media, including yesterday's blog entry here in L by L. But the other two have been (un)fairly ignored. 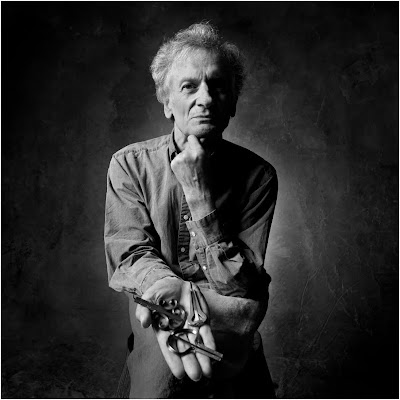 I remember years ago when I worked in a record store in Ithaca, New York, Mike was dropped from Mercury Records due to a vinyl shortage. "Why are they dropping me?" he asked. "If they're so concerned about the vinyl shortage, why don't they drop (labelmate) Rod Stewart? He's the one that's selling all the records." Mike Seeger didn't really belong on Mercury anyway. He belonged on Folkways or Asch or Stinson or any of the small, folk- oriented labels that proliferated in the '50's and '60's and that inspired later companies like Rounder.

Seeger's music came from a time when the family would gather around a piano in a parlor or sit on the front porch on a warm summer night with their guitars, banjos and mandolins and sing all the songs they knew. Nowadays, we don't even have a parlor. Or Mike Seeger. 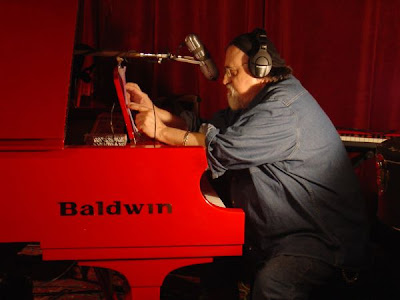 Jim Dickinson at the big red Baldwin
And while we're at it, let's wish smooth sailing and some good 'shrooms to Jim Dickinson (November 15, 1941 - August 15, 2009) on his last voyage. Dickinson knew much about music and the perception of music, and was wonderfully articulate about it. Here's a link to an excellent interview he gave to James Calemine in Swampland Magazine: http://www.swampland.com/articles/view/title:dixie_fried_with_the_high_priest_of_memphis_mojo_jim_dickinson

Jim Dickinson was one of those guys who was there at the right time and whose career spanned the history of recorded Rock n' Roll.

These are the musicians who matter, the ones who don't make huge sums of money but who soldier on because it's what they do. As John Lee Hooker says, "It's in [them] and it's got to come out."
Posted by Bret Littlehales at 9:12 AM

I actually took a graduate seminar with a very intelligent professor from Oxford on the concept of genius (specifically genius in literature, although we talked about the origin of the word and the concept in general as well) and nothing was ever said in anything I ever read or heard in the class about the term being limited to music or math. I don't know if that means anything, but I thought I would mention it.

Apart from that, I just want to say it always makes me sad when the deaths of people who made significant contributions to anything go unnoticed, so it is good that you were able to pay homage to these two men on your blog.