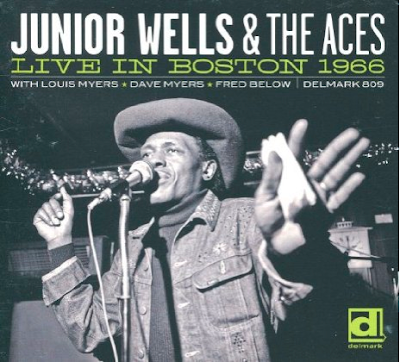 Which was the real Junior?

I can't answer that. The obvious reply is, "All of them," but that's a little too trite, if you ask me. I witnessed many of these Juniors (not the fighter, but I saw the potential, and also saw the ex-gang leader's temper explode on occasion.)

He was also very kind to me, requesting that my band open shows for him at the late, lamented Tornado Alley club in Wheaton, MD, and giving me harmonica lessons in the dressing room between our sets.

I had idolized Junior since I first heard him on an FM station in 1967 playing Help Me or, as it was called, Tribute to Sonny Boy, from the Chicago, the Blues Today collection on Vanguard records. I was waiting for  Eric Hall in the dorm room at St. Albans, and he had his radio tuned to WGTB, the Georgetown University campus radio station.

What a white boy/ elitist introduction to Junior Wells!

I had been learning blues harmonica from Sonny Boy Williamson II and Paul Butterfield recordings, but this stuff of Junior's, albeit familiar, was a different take. For one thing, it was way more percussive. It smacked of backbeat and rhythm. Then there was that one plaintive note, over and over again. Tension/ release, tension/ release.

There was also that little gem of an intro, where he refers to Sonny Boy as "an old pharoah." What the fuck?! An old pharoah? Years later, in the dressing room of Tornado Alley, I asked him what a pharoah was. He said it was a term of respect, given to a king, "You know, like in Egypt."

When Bobby Radcliff and I started the Northside Blues Band in 1968, we patterned it on the Junior Wells/ Buddy Guy shows we had seen. Lots of space between notes. Keeping it lean and sparse.

I saw a lot of Junior and Buddy after that. Saw some great shows, like the one at the Newport Folk Festival in 1968 with Freddie Below, Jack Myers and A. C. Reed on sax, or another amazing show at the old 9:30 Club in DC, where Junior sang his version of Muddy Waters' Just to Be with You, which Junior called Ships on the Ocean, one of my all- time favorites. It was a sublime moment.

We stayed for the second set, but Junior had been drinking in the dressing room. He stumbled out, played harp in the wrong key for a few minutes and then we left.

Unfortunately, this was all too often the case. Junior was not a good drinker. I read where (I think it was) Dick Waterman claimed that Junior needed to drink because of stage fright, but whatever the reason, he just fell apart when he drank. And, after Buddy left, he drank all the time.

It must be hard to sustain great or even good blues throughout a long career.

So... Junior and I finally really meet backstasge at Tornado Alley. We hit it off. I got to know his nephew/ road manager Michael Blakemore (Junior's real name was Amos Blakemore) and we hit it off too. One night Junior sang Early in the Morning while I played harp. Another time we discussed the first Sonny Boy Williamson, John Lee Williamson, who died in 1948 in an assault on his way home from a gig in Chicago. "He was small, Bret," said Junior. "Even smaller than me!"

Junior was a teaser, an expert in the dozens, and if you couldn't keep up with him, then he'd turn his attention elsewhere. One time, when we talking about Little Walter, I asked him, "I heard that Walter didn't like people bigger than him." Junior thought for a moment and said, "No, he just didn't like big fat white harp players who don't know what they're talking about."

I said, "Well, little as you are, he must have loved you." We both laughed. That's what he liked.

He made me march around with him to improve my time. He told me to dress better. He said he used first and third position in playing harmonica to keep the songs closer to his vocal range. He made me drink sloe gin from a little flask he carried. He wouldn't touch marijuana (as opposed to another ex- Muddy Waters harp player, btw.) He told me what a pharoah was.

His nephew used to tell me, "He's like a little boy, he can't be controlled." Junior would just smile and nod. "I'm the baby, " he'd  say.

He said the next time I was in Chicago to call him. He said he'd show me a Chicago I'd never see otherwise. I believed him.

Now, in 2010, we have a "new" Junior Wells recording, Live in Boston. Actually, it should be called Live in Cambridge, because that's where it was recorded at the Club 47.

These recordings have been floating around as bootlegs for years, but they sound much better on this disc, although the sound is far from perfect.

This was an important gig for Junior and he took an important band into Cambridge that weekend, his first great band, the Aces. The Aces, brothers Louis and Dave Myers along with Professor Fred Below on drums, had left Junior in the '50's to back up and record with Little Walter. Consequently, they're on some of the finest blues recordings ever made.

Here they are- Junior riding on the coattails of his first crossover album, Hoodoo Man Blues, reunited with his old bandmates. It's 1966, he's young, fresh. Straight out of Chicago. Full of piss and vinegar.

It's just a great record of a great show. Junior tells stories. Junior improvises. At one point he gives a long, twisted introduction to a Sonny Boy Williamson song, Fattening Frogs for Snakes, and then sings a completely different song! Remembering lyrics was never his strong suit, but forgetting the whole song... well, probably there was a flask of sloe gin in there somewhere.

Doesn't much matter. The Aces are incredible as advertised. It gives me an insight into what a live Little Walter show might have been like. They hit every curve ball Junior pitches into the bleachers, most notably a thing titled Junior's Whoop, really just a play on the old Mellow Down Easy riff that seems to be improvised from about the second bar onward.

Good packaging, and fine notes from Scott Dirks round out the CD, but make no mistake, Little Junior Wells is the star of the show.

Thanks to Bob Koester and the folks at Delmark for legitimising this one and getting it out there.

I surely miss Junior Wells. Of all the alpha harp players I've spoken to, he was the only one who really became a friend, and I think about my friend all the time. Now he's the old Pharoah, and I'm the person saying, "Goodbye, old man."

Let's leave it with this:

Great review; album just rose to Number One on my must buy list.

This is your best blog yet...