A Dream About My Youth 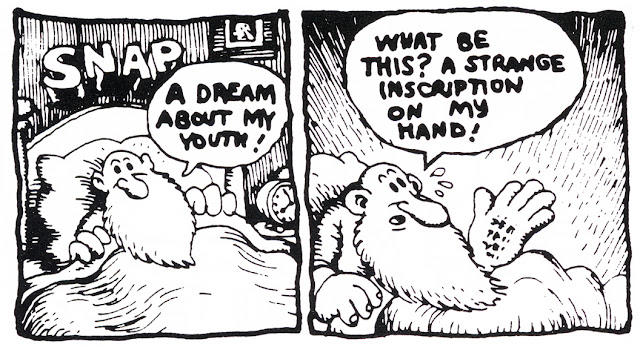 R. Crumb, from the Head Comix poster that hung in Eric Hall's dorm room, St. Albans School, Washington, DC, 1967 (until someone made him take it down.) The beginning of the '60's for me.

Sometimes you'll see something that just resonates inside your skull, something you feel like you've been seeing on the edge of your life forever, something that speaks to your strangest dreams and those childhood memories you can't make sense of, like the cartoon with the angels' pillowfight that ends with Tom and Jerry (not the cat and mouse, but the older ones, from the Van Beuren Company) crawling under the train track  in the snowstorm, or the "Wanna Be A Member?" sequence from a Betty Boop cartoon.

That's what these two panels mean to me. A dream about my youth! (How prophetic!) What be this? A strange inscription on my hand!

These two panels pretty much sum up my own strange trip through the 'sixties, and several subsequent years, I'd say until maybe 1974 or thereabouts. By the time I left Ithaca, NY, for the Rhode Island School of Design in 1973, the '60's were definitely winding down for all of us.

The casualties, the deaths of dear friends like Guy Dorsey, Ben Clopton, Wells Kelly and Steve Hubert were still in the future, but not by much. All four deaths were related to the times in which they lived and, of course, they died much too soon.

Way too easy to experience the bittersweet emotion of  nostalgic longing when a song like "Dancing in the Moonlight", the unofficial theme song of Ithaca hippiedom circa 1969- 1973 comes on the radio, and while it's not the original by Sherman Kelly, Wells' brother, recorded by Boffalongo, but the pleasant- enough King Harvest version, I can still think back about a time so far away that sometimes I'm not so sure I didn't dream the whole thing.

Is this what the strange inscription means? Is this the content of my youthful dreams? I don't know. I can never quite remember. I think I know, but then again....

This one's for all my pals, and you know who and where you are.
Posted by Bret Littlehales at 5:04 PM

This is really beautiful in both writing and content, so bittersweet it makes me want to cry in the same way the endings of Wes Anderson movies do.

This is a good one! Well, they're all good, but this one is particularly excellent.