The other day I heard the Washington, DC, NFL Football franchise referred to as Dan Snyder's Redskins.

Not the Washington Redskins or the 'Skins, or any of the homegrown names the fans would bestow upon the team when Jack Kent Cooke owned it.

Okay, I realize that every sports franchise is owned by some billionaire or billionaires and that they are expected to earn a profit one way or another. And I also know that the players are paid ridiculous amounts of money to play, whether they have a "fighting dogs" mentality or enjoy molesting people like the guy who was married to Joey Heatherton. (Joey Heatherton is a woman's name, by the way.)

But it seems to me that the big magic trick here is to make the citizens of whatever town the team is from think that it's their team. Or, as in the case of the Cowboys, America's team. What a detestable appellation that is.

Here's the trick: a city, like Washington, DC, has a team it calls its own. It roots for that team through thick and thin. The city pulls together, rising and falling as one with each game, depending on victory or defeat. Doesn't matter though- the team unites the city demographics as nothing else can. Black and white have something to talk about. Rich and poor, male and female, Muslim and Jew- if they belong to the city, they are united in their love of their team.

When it is done masterfully, like the Saints in New Orleans, it can literally bring a city back from the very brink of disaster. It can revitalise a city or a whole state. It is, simply, one of the greatest magic tricks ever performed.

And it's performed every Sunday in the autumn and winter more or less flawlessly.

Except here in my hometown of Washington DC where it is performed so ineptly that the city can barely lay claim to its stupidly named football team, Dan Snyder's Redskins.

Here in Washington, the owner of the team sees fit to not even bother to perform the trick. He makes it as difficult as possible to attend home games if one's income falls below the million dollar mark. Tickets are in the hundreds- of- thousands- of- dollars range (well... close, I think) thereby preventing any riff- raff from witnessing his highly- paid players lose week after week.

How does he do it? That's easy- aside from an ability to make gobs of money in really unpleasant ways (he used to run a telemarketing company), he's a pathetic loser. He has no idea what he's doing or how to do it. He doesn't even know why he should do it. He is the Sammy Glick of football.

Thanks to Dan Snyder and his Redskins, my city has damn little to be proud of. We play host to a bunch a moronic politicians who are letting the country go to the dogs (and I know that's not fair to dogs), we have no representation in the federal government and little tax base here in the city. Institutions are drying up right and left.

Culturally, we are a total washout, since there's virtually nowhere left in the city for artists to live and create, let alone show their art. We're overdeveloped, undermaintained, and  infra-structure starved.

Forget the Redskins, citizens of Washington! They don't belong to you- they're a billionaire's toy, played with human beings and named after one of the worst things you can call a Native American.

If you want to do something really wonderful that you can't do anywhere else, go to the National Gallery. It's free and you can see some of the greatest works of art in the history of humankind.

It's much better than paying $50,000 for a hot dog and watch some losers lose. 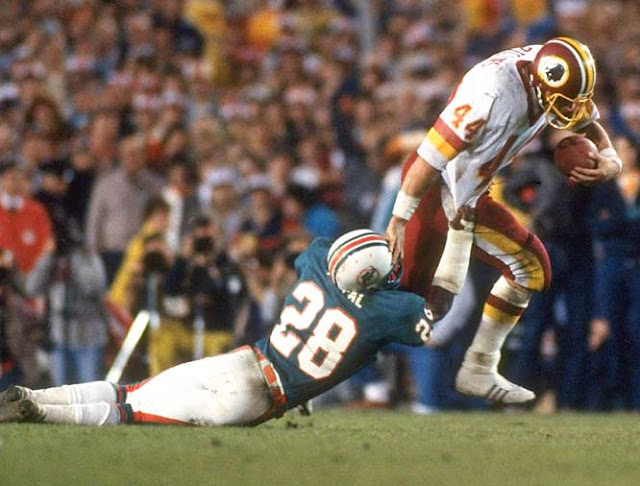 Remember this? Remember how great you felt?
John Riggins of the Washington Redskins. What happened to that team?
Posted by Bret Littlehales at 7:58 PM

Wow, is it really $500 for tickets to the game and a hot dog? The fans in attendance don't really look like they can afford $500/game. But I guess it's close. Boo Dan Snyder!

Ugh, not me! I still ONLY call National Airport by it's real name which is National Airport. Reagan has no place in it. He's not even from Washington, so what gives with that? Stupid Repubs.