Frank's Place: Dining at the Chez

It was no accident that actor/ producer Tim Reid showed up on last season's Treme. Portraying a sympathetic judge in two episodes, Reid brought back the humanity, however briefly, that he displayed in his short- lived sitcom (for lack of a better term) Frank's Place. The series, which ran from September of 1987 to March of 1988, depicted life in New Orleans, centered around a restaurant, the Chez,  and its staff and regulars.

I have several episodes on video that I taped much later when the series was re- run on BET, sandwiched between late- night party- line commercials. Last night I brought out a couple to see if the series was as good as I remembered. It wasn't. It was much better than I remembered.

Nowadays a series as intelligent, sensitive, evocative and well- written as Frank's Place would be on HBO or some other premium cable outlet. No laugh track, no studio audience, and each episode looks like a half- hour movie, with multiple camera set- ups and lingering close-ups, all shot in the single- camera method.

Instead of wondering why was this show cancelled (it was on CBS), I wonder how did this show ever get on the network to begin with.

From the evocative opening credit sequence of sepia- toned photos taken in New Orleans, with Louis Armstrong singing, "Do You Know What It Means (To Miss New Orleans)?" in the background, to the outstanding cast of regulars, particularly Francis E. Williams as the veteran waitress Miss Marie, and Robert Harper as the genial alcoholic attorney Bubba Weisberger, to the authenticity of every song that comes off that great jukebox, Frank's Place takes us to New Orleans as effectively as Treme does, but Tim Reid does it without leaving a Hollywood soundstage.

A canny mixture of out and out comedy and intense drama, it is unique in television history, which is why the producers of Treme honored the show with a Frank's Place night in New Orleans.  Two episodes were screened recently at the New Orleans Center for Creative Arts, with show creators Hugh Wilson and Tim Reid in attendance. Most of the audience had not seen it since 1988.

Everyone who was a fan has their favorite episodes, and I've had more than one barroom conversation in New Orleans recounting my favorites and re-living someone else's, much like the character Soapy who comes into the Chez and recounts the week's soap opera plots in exchange for free drinks.

They're all good, but some are really, really good. The two- parter that revolves around Cool Charles' slide into the drug trade is amazing with its ethereal ending, both episodes involving the Drivers are wonderful and a personal favorite is the one where the aging business tycoon thwarts the takeover of his company in New York without leaving the Chez.

There are no DVD sets forthcoming, because the music rights (including Armstrong's opening song) are too expensive. As far as I know, nothing has come of Reid's plan to replace the theme or the jukebox songs (how can you replace Guitar Slim singing "The Things I Used to Do"?) So I'm lucky I have my small collection of videos, and whenever I want, I can go to New Orleans, order a bowl of gumbo from Miss Marie and see my pals at the Chez. 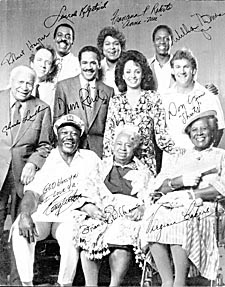 Posted by Bret Littlehales at 11:58 AM