The Ferris Wheel made its debut at The Chicago World's Fair (or World's Columbian Exposition) in 1893. Since then it has been a mainstay of amusement parks and county fairs all over the world. One would think that the Ferris Wheel, named after its inventor, George Ferris, would be passe- certainly not an earth- shattering attraction or an economical revitalizer. I mean, hey- it just goes round and round, right? Like a vertical Merry- Go- Round, right?

Let's not forget the power of the wheel. The original Ferris Wheel saved the Chicago Fair from bankruptcy, despite the fact that there were hundreds of incredible exhibits there, as well as an advanced architectural concept that still fascinates today.

Which brings us to 2010, on the eve of 2011, and the London Eye. The Eye is a modern- day Ferris Wheel, the creation of husband/ wife architectural team David Marks and Julia Barfield. Begun in 1999, it opened in 2000 as the Millennium Wheel, under the primary aegis of British Airways. Soon after it became known as the London Eye. 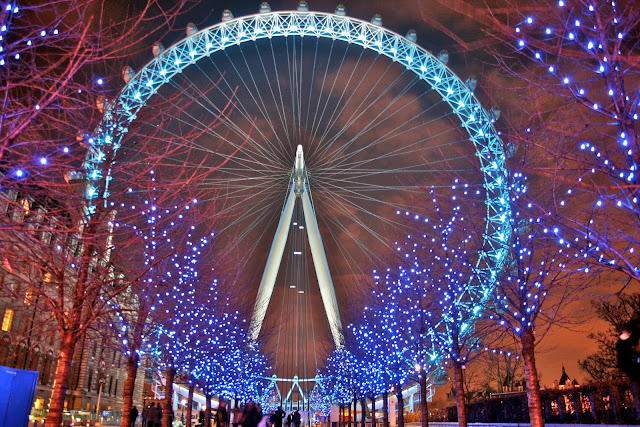 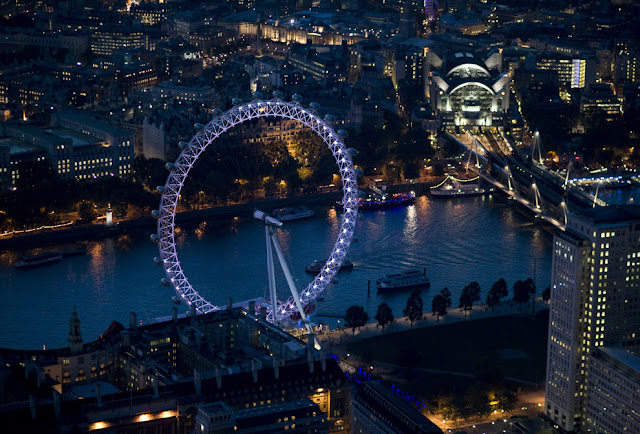 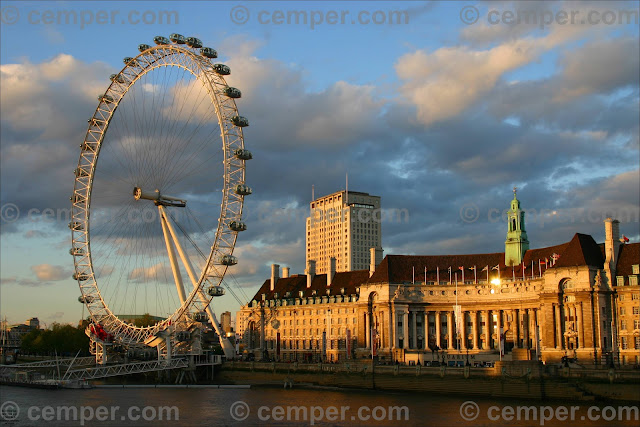 Situated on the Thames, the Eye has become the United Kingdom's biggest tourist attraction. It has changed the landscape of London, and is a major focal point for movies and TV shows. Thirty two air-conditioned (and presumably heated) capsules hold twenty- five people each. The Eye revolves slowly and apparently, doesn't stop as people get on on and off.

I don't know about you, but I find this amazing. In 2011, the number one attraction in Great Britain is a Ferris Wheel. Never mind the Tower of London or the changing of the guard or the Queen's Dollhouse or Abbey Road or whatever- let's go to the Ferris Wheel, which uses no new technology (unless you think air conditioning is new) and has been around since 1893.

So- how come there aren't more? One reason is that the Eye has not yet turned (get it?) a profit. Patience, Eye- watchers- it will!

Here in Washington, DC, we have a beautiful river, the Potomac. Some of the most famous sites of the city are on or near the river: the Washington Monument, the Lincoln Memorial, the Jefferson Memorial, the Smithsonian, not to mention Arlington Cemetary and the Pentagon.

There's a great park, Haines Point, right there, on the river! Perfect location for the DC Eye. The city is always whining about revenue- let's build an Eye! A sultry summer's evening, a stroll to the park and a ride on the DC Eye.

Okay- I know it's DC, the home of nothing (except the government- so, close to nothing), the city well- known as the enemy of creativity, graciousness, beauty, etc. but this seems like a no- brainer, even for the morons who run this town. As long as we can keep the Dan Snyders and their ilk out, we could probably get it right within, oh- a good ten or so tries, including bankrupt construction companies, graft, greedy lawyers, corporate indifference, unpaid bills and shoddy construction.

Seriously- the Eye has it!
Posted by Bret Littlehales at 1:18 PM

I think your original suggestion of having the Eye on the banks of the Anacostia River, right adjacent to the new Nationals Park, is an excellent idea!

I hoppe I could come in London someday. :D