One of the first things I learned about maintaining a blog is that you have to keep blogging on a fairly regular basis. If I go to someone else's blog and see that the last entry was sometime in 2007, then I lose all respect for that blogger. That's right- all respect. Blogging is a very respectable past time.

However, because my blog does not detail my adventures with, say, my grandchildren or what I did today, I often run out of things to say in the context of the blog. In real life I just talk and talk, loudly, until everyone begs me to shut up.

Here's a few tricks I've developed over the last year and a half:

1. Watch some pundit on television passing themselves off as an intelligent objective observer of current events. Fox News is is a sure thing. This usually makes me so angry that I'll write an ill- reasoned diatribe.

2. Check dates for birthdays. Especially musician's birthdays. This is very different from actually planning to write something on their birthdays, which I rarely do.

3. There are other blogs where someone else has done a lot of work or research and found some cool pic or video. Just re-publish (with credit of course) and there's your blog!

There you have it: four short blogging tricks. I'm sure other bloggers have their own shortcuts, but these are mine and I'm passing them to you, gentle reader. Blog on!

Finally, in the spirit of tip # 3, here's a very sweet pic from the great If Charlie Parker Was a Gunslinger, There'd be a Whole Lot of Dead Copycats: 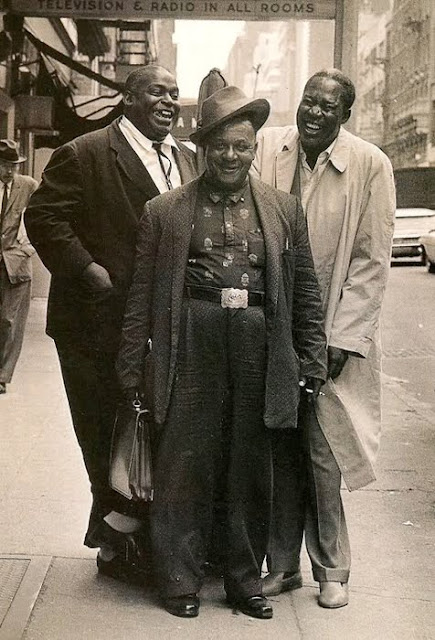 Here's Willie Dixon, Big Joe Williams and Memphis Slim sharing a laugh on the streets  of Chicago. This is one of those photographs where I wish I had been there,  a cosmic snapshot of three icons doing something they probably did everyday at that point of time.

After this all three would go their separate ways, Dixon back to the Chess Studios to record some future classic, Big Joe back down south to continue his career as the definitive itinerant nine-string- guitar- welding blues man and Memphis Slim ultimately to Paris where he lived out his life playing nightly in a high- priced bistro.

Luckily for us, on that day in Chicago, someone made this snapshot: Joe with his briefcase and champion belt- buckle, his hat at a rakish tilt and a lit cigarette in his left hand, Willie with his skinny tie and perennial white socks and Slim wearing his  elegant slip-on loafers and wrinkled raincoat.

Compare their nonchalance with the uptight guy in the background and you realize immediately why it's better to be a great bluesman than to be almost anything else.
Posted by Bret Littlehales at 11:28 AM

i always love your posts, and almost every entry makes me laugh out loud (sometimes they're serious and not supposed to be funny!), but this one especially made me laugh! thanks!

Thanks for the blogging tips, Bret. I'm a newbie at it myself, having just begun on 12/31/2010. I'd like permission to post a link on my blog page to yours. If you felt so inclined, you could certainly return the favor.

Most of my material is original, although I do pride myself in plagiarizing from the best of the best when ever possible, almost always giving credit where due. "Random Thoughts from a Wandering Mind" can be found at - http://oldmrbill.blogspot.com/ and any comments, critique and/or suggestions will be warmly received.

Tomorrow, I'll begin my day by eating a frog. Composing my next blog post should be relatively easy after that, don't you think?

Wishing you and yours a Happy and Prosperous New Year.
William Littlehales

Both "I Came to Run" and "Binx" will note that Big Joe is w3earing a jaunty plumeray.