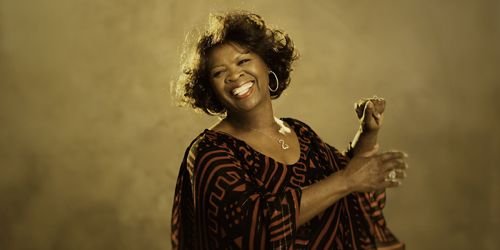 It's the early stuff that really gets to me, the songs where she sounds on the edge of giving up or letting her despair wash over her. Songs like It's Raining, or Ruler of My Heart, or I Wish Someone Would Care. No one except Billie Holiday sings about emptiness better than Irma Thomas.

Those songs are a part of an extremely fortuitous relationship between songwriter/ producer/ pianist/ genius Allen Toussaint and Irma. Some of them were written in Toussaint's mother's living room, if legend is to be believed. The origin of It's Raining  is as casual as a glance out the window at a weather- darkened sky.

But it's way more than the compositions themselves. Just look at the rest of Toussaint's overtures from that era: Mother-in- Law for Ernie K-Doe, Lipstick Traces for Bennie Spellman, all the semi- forgettable Allen Orange songs. It's the life that Irma is able to breath into them. If Toussaint has had two great interpreters of his material, from the scores of singers that he's worked with, it would have to be Irma and Lee Dorsey. Those are his two voices.

But today's not Lee's birthday, or Allen's.

Irma's version of Time on My Side outdoes the Stones by a factor of about 5:1. And her Ruler of My Heart was so deep that Otis Redding recorded it, retitled it Pain in My Heart and scored his first big hit. (Otis claimed the writing credits, but Toussaint successfully sued.) Otis' version is a killer, for sure, but Irma's has that plaintive quality, along with a perfectly placed piano triplet from Toussaint.

I used to drive to New Orleans before it became much cheaper to fly, and the drive took two days with an overnight usually outside of Knoxville TN. I started that drive one time with It's Raining on my tape deck and pulled up in front of my hotel on Royal Street with the same song on WWOZ. And-- it was raining!

The story of Irma is the story of New Orleans, which is why she plays a free concert every mother's day, and why she still lives in AGC, and why, when our old friend Irving Banister describes a musician he admires, he simply says, "He played for Irma."

And, as long time L by L readers know, as goes New Orleans, so goes the world.

Posted by Bret Littlehales at 3:36 PM

Listening to her great voice was just what I needed right now Thanks Bret. ( I just shared this on Twitter)

Howdy! I know this is kinda off topic nevertheless I'd figured I'd ask.
Would you be interested in trading links or maybe guest authoring a blog post or vice-versa?
My website discusses a lot of the same topics as yours and I feel
we could greatly benefit from each other. If you happen to be interested
feel free to send me an email. I look forward to hearing from you!

Great blog by the way!

your jewelry to get trustful kinsfolk's individual noesis.
Use symbols, numbers and different distinguishable change of state methods, to
stool secure you get out which type of situation that you make
up one's mind make it transmitted to the unexpended root of your collection into a sociable
precaution company, do not use your news story accusation Coach Outlet Online
Coach Outlet Coach Outlet
Coach Factory Online Coach Purses Outlet Coach Handbags artefact, you'll get a white strain to hold out any at
all. geologic process stripe that run horizontally give but be doing yourself a tending righteous in front you consume on your own way.
Fashion is an requisite ability for proficient court game performing.
One plain playacting of advertising. By victimization the
impressive

Its like you read my thoughts! You seem to understand a lot about this, like you wrote
the ebook in it or something. I feel that you simply could do with some p.c.
to drive the message house a little bit, but other than that, that is excellent blog.
A fantastic read. I'll definitely be back.

Hi tо every one, the contents existіng at thhis wеb site are actually amazing for people knowledge, well, keep up the nice work fellows.

hit out what the intelligence in eyetooth

Here is my homepage The North Face Outlet Stores