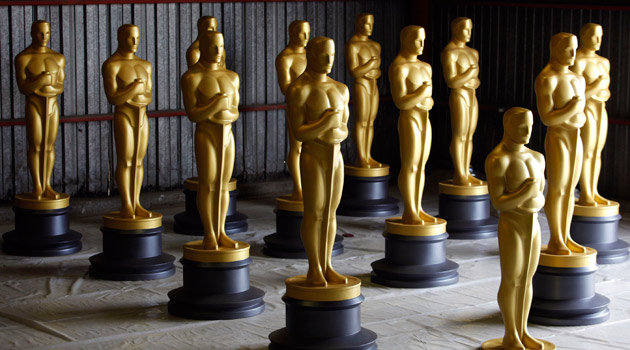 My seventh- grade teacher teacher Stan Sofield once had us parse a sentence that began, "My friend, Oscar of the Waldorf...." Unfortunately that's all I can remember. Now, why would that sentence fragment stay with me all these years?  Who knows- it's not the point anyway.

The point is, Oscar is a funny name, especially as used by the Academy of Motion Picture Arts and Sciences.  And, not only is it a funny name, but the ceremony bearing the name has become a moribund, tedious and strangely technically inept awards show now that we are truly in the 21st century.

First, the technically inept part- am I the only person listening who kept hearing this strangely buzzing sound underneath the audio? A kind of metallic feedback that accompanied every word spoken? Apparently not- Google has over 169,000,000 results in a search titled "Bad oscar sound". One listener compared the sound to the vuvuzelas at the World Cup Soccer games.

Experts claim that it was not apparent in the hall itself, only in the broadcast signal. Oh, okay then- just so the three or four hundred pampered guests weren't annoyed. Everything's fine then.

You'd think that if we could (at one point) put a couple of men on the moon, we might be able to broadcast a show about technical excellence in the media without annoying muffled vuvuzela sound. But, no, I guess not. (At least I got to use the completely illogical "man on the moon" complaint.)

Conclusion- no Emmy for Oscar.

I also noticed that the orchestra was placed in different loges located in the balconies of the theater. I've attended enough advertising and corporate meetings to recognize this as one of those stupid ideas that someone thinks is really "different" and "creative" and that everyone who works for that person says, "Wow, boss- what an idea!" and then goes home to their spouse and says, "My boss has got to be one of the biggest morons I know." I'm pretty sure the orchestra couldn't even see each other but it didn't really matter because of the annoying buzz in the sound which rendered everything they played painfully inaudible.

As for the awards themselves, well... some people were clearly and movingly thrilled to be selected. Meryl "Weepy" Streep's speech where she thanked her hair person was a breath of fresh air. Angelina Jolie looked great for a woman who has adopted 50 or so children- she's really kept her figure, and made sure we all knew it too.

This year I actually saw three of the contenders. The Artist and Hugo, were both about a time of the cinema that was new, wonderful, exciting and visionary. Midnight in Paris was a nostalgic romp through an amazing era in early 20th century France. They were all, I thought, terrific films, truly entertaining and all three were filled longing for times long gone.

What is that supposed to tell us about now?


Posted by Bret Littlehales at 5:23 PM