There's Something About Ernie Bushmiller...

...that gets under my skin.

When I was young and would devour the Sunday Funnies, I almost always skipped Nancy, Bushmiller's signature cartoon strip. Other cities' newspapers still carried Fritzi Ritz, an earlier strip featuring Nancy's glamorous aunt, but here in DC, it was Nancy, Nancy, Nancy. I just didn't get it, I mean, what was there to get? Bushmiller struck me even then, when I was about eight or nine, as a square from squaresville (the place where all the squares lived.)

I also couldn't understand why any cartoonist would invent a character that had to have all those little hairs drawn around her head. Surely it had to have taken hours, I thought. The idea that anyone would want take that kind of time drawing all those little hairs over and over and over almost repulsed me. Obviously this was early evidence of my short attention span, a trait that has dogged my entire life.

But it didn't dog Ernie's life. The precision of his line now strikes me as startling- so clean, so decisive. There's a geometry to his layouts and finishes unlike any other strips at the time. What started as a more or less typical post '20's pin-up based strip ended up as a surreal look at society ostensibly told through a little girl's eyes, but actually told through an adult man with a sensibility divorced from all the reality going on around him.

Oddly enough, Ernie's concepts began to really gel for me in the '60's as I became a devotee of underground comics, especially the work of R Crumb (as readers of L by L know). My earlier posts have tended to emphasize this, especially in some of the Sluggo panels I've reproduced.

Like the most perfect of Zen gags, Bushmiller's strips seemed to be about nothing: everyday life lived by everyday characters with some mysterious access to a plethora of everyday objects that you never heard of such as invisible hammocks and flying saucers. Well. maybe you've heard of flying saucers, but I doubt they've ever landed in your back yard.

The strangest concept to me was the character of Sluggo- an orphan kid who lived by himself in an apparently abandoned house. Was he tough? He looked tough, he had the requisite "dese, dem, dose"- tough- kid- from- Brooklyn accent, but he was often dogged by bullies that seemed to really scare him. And where did he get that haircut? You'd have to shave your head every other day to get a haircut like that (again- the little tiny hairs).

I often muse about Fritzi Ritz, Nancy's uber- sexy aunt and guardian. Bushmiller started as a pin-up artist and Aunt Fritzi is his finest creation. No matter what the era, she remains a product of the '30's and '40's, all curvy lines, pouty red lips and seamed stockings. But how did Fritzi end up with Nancy? Was her sister Nancy's mother? Or was it her brother? Were they killed? In some sort of automobile accident? Or did they just abandon Nancy? There's a long line of cartoon characters that have nieces or nephews to take care of, like Popeye with Sweetpea or Donald Duck with Huey, Dewey and Louie, or Popeye again with those three obnoxious nephews. (Wait- was Sweetpea Olive's nephew?)

No wonder fat little Nancy has that eating disorder. Wrenched from her parents at such an early age, confronted by the beauty of her aunt, and with only an abandoned orphan for a friend- what a world! Of course, that's just my version of her world. Bushmiller's is much different.

Ultimately Bushmiller surrendered that world to the great comics writer John Stanley in the run of Dell's Nancy comics. Stanley, who was responsible for the wonderful Litte Lulu comics of our youth, broadened Bushmiller's concepts; introduced  a much larger cast, like Oona, the little girl in the haunted house; tamed Aunt Fritzi's image and generally made a very entertaining universe.

But unlike Little Lulu, the concept of Nancy didn't really need tinkering. Stanley's Nancy is calculated and slightly self- conscious. Bushmiller's is straight from the id, and decidedly un- self conscious.

Here, thanks to the wonderful Mr.Door Tree are a bunch of Nancy's (and Fritzi's) brought to you by the great Ernie Bushmiller. 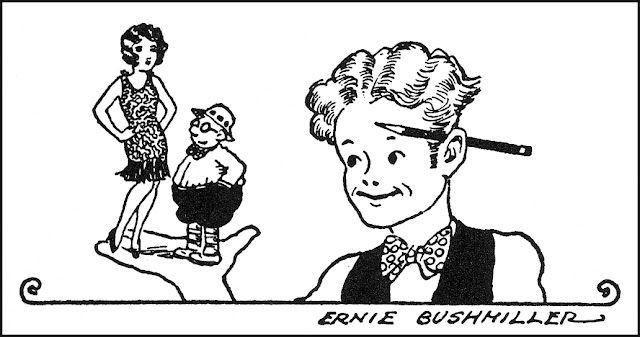 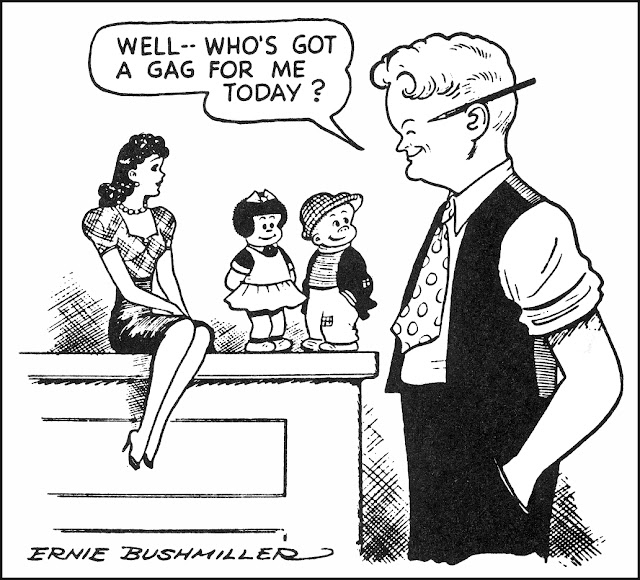 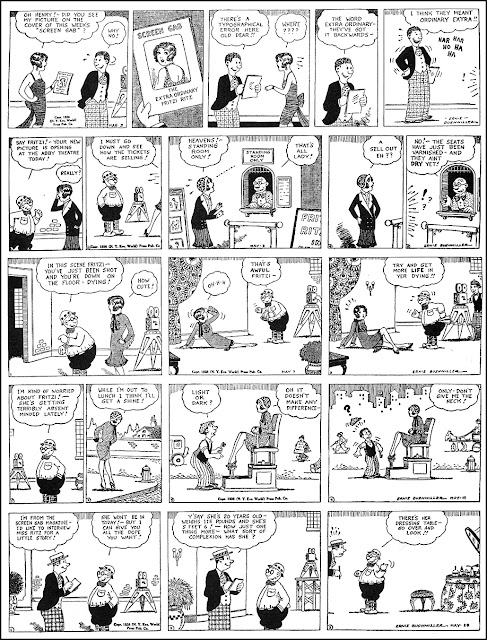 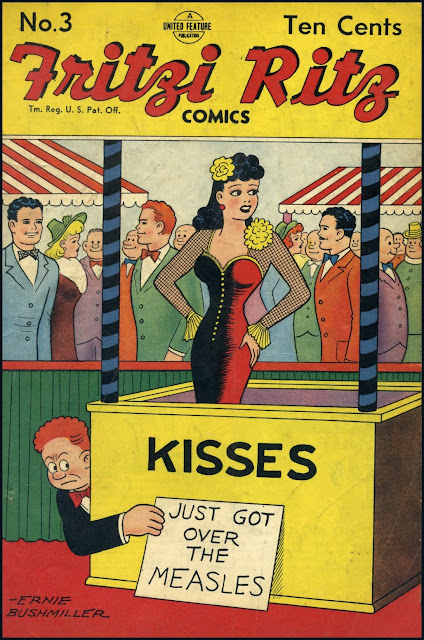 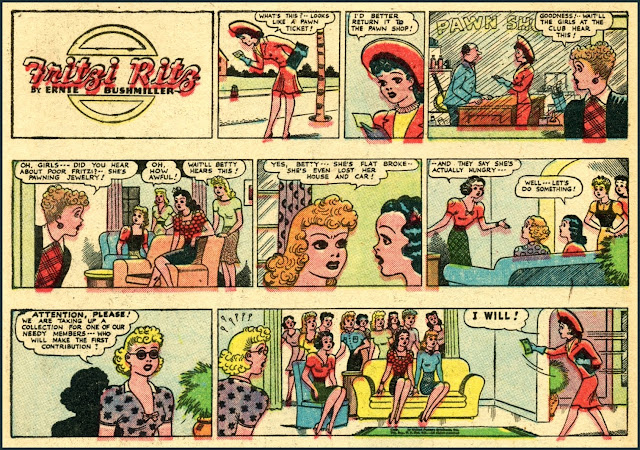 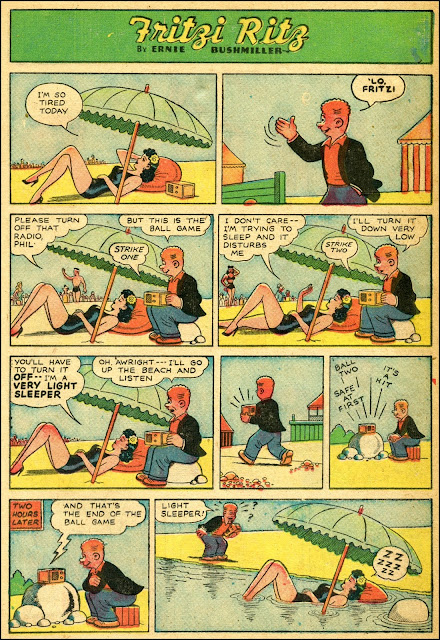 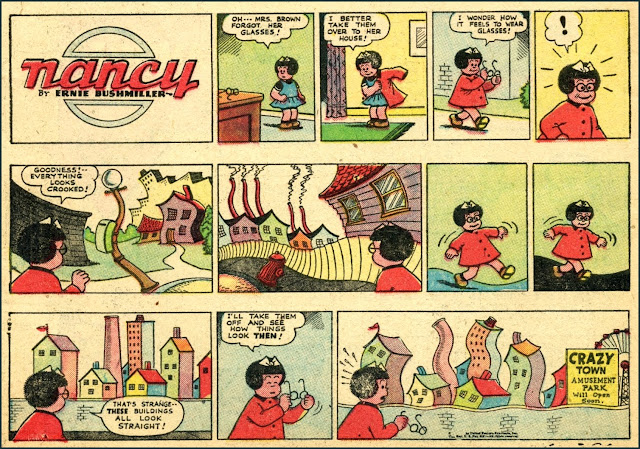 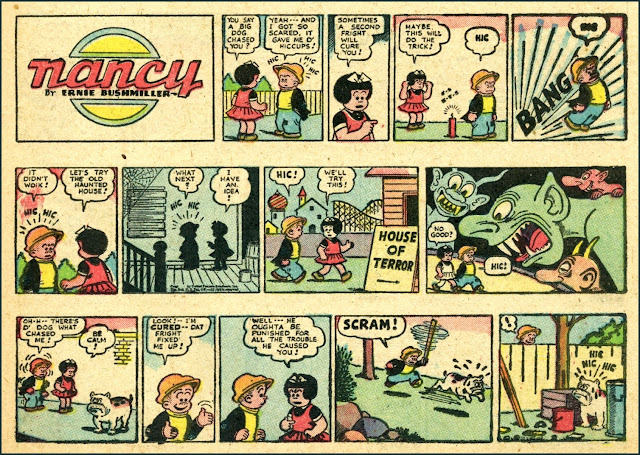 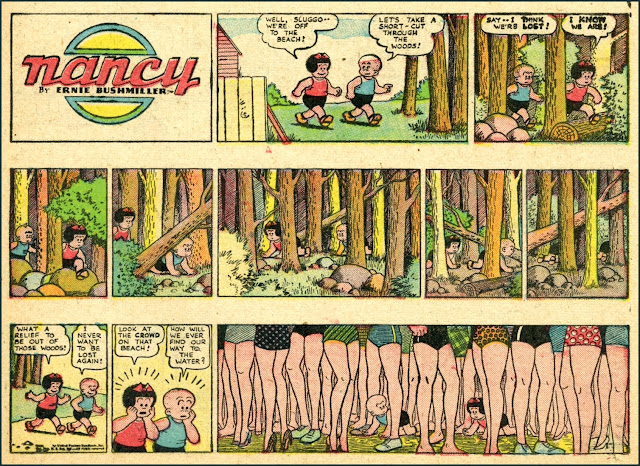 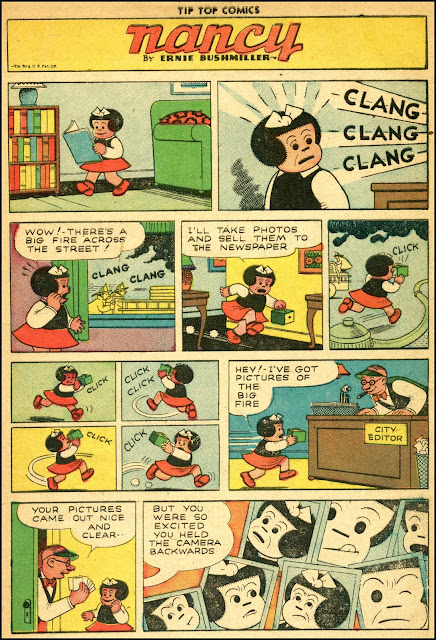 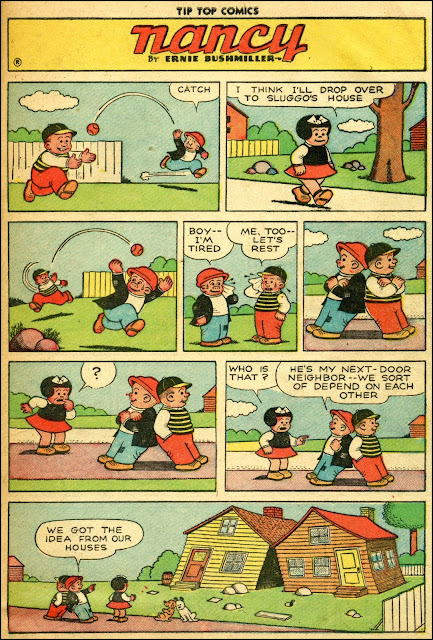 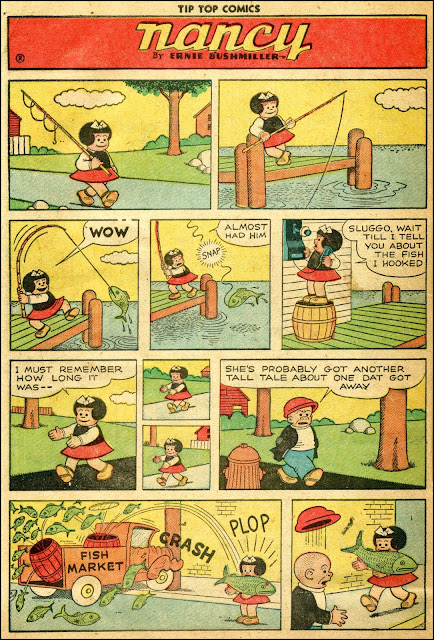 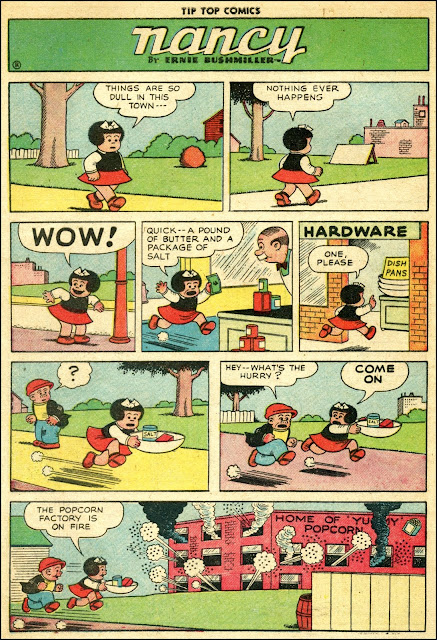 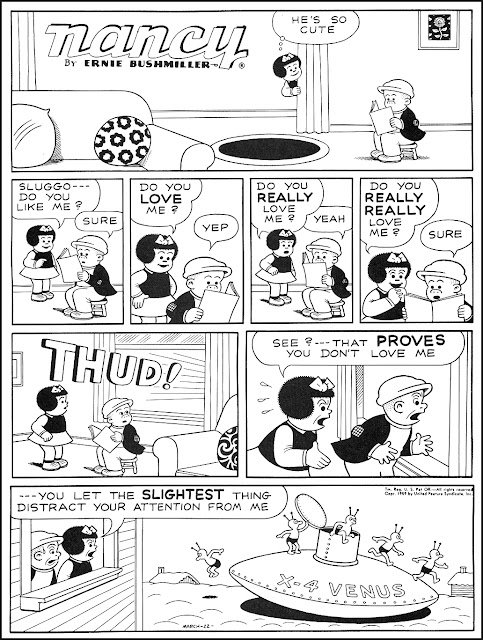 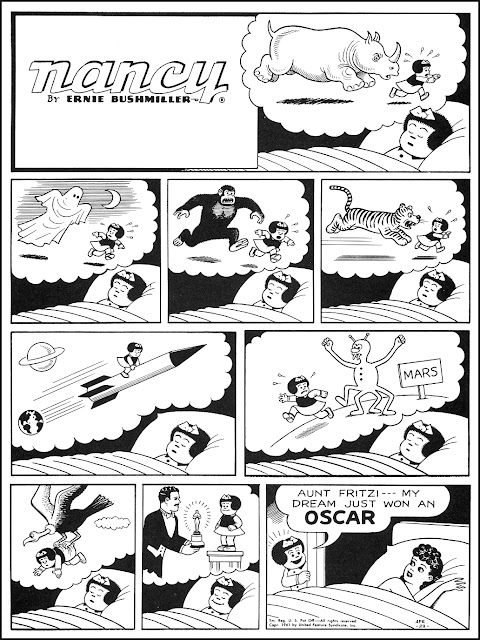 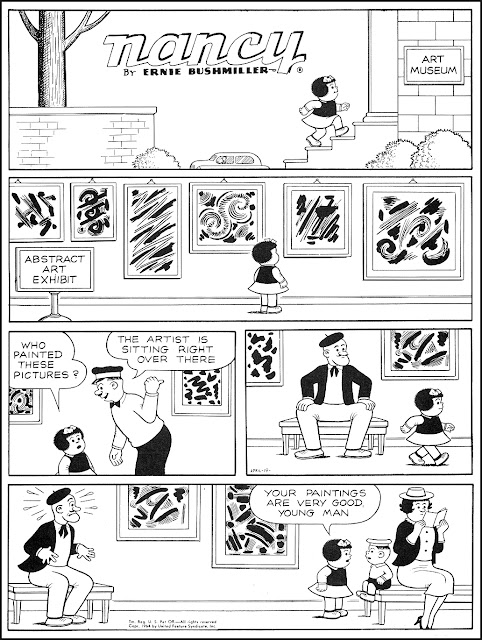 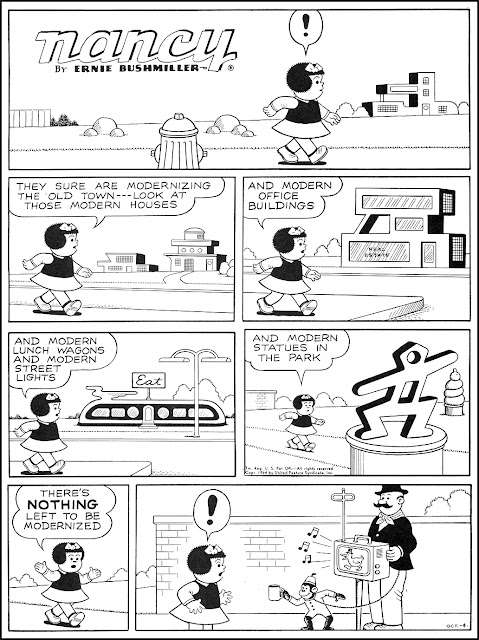 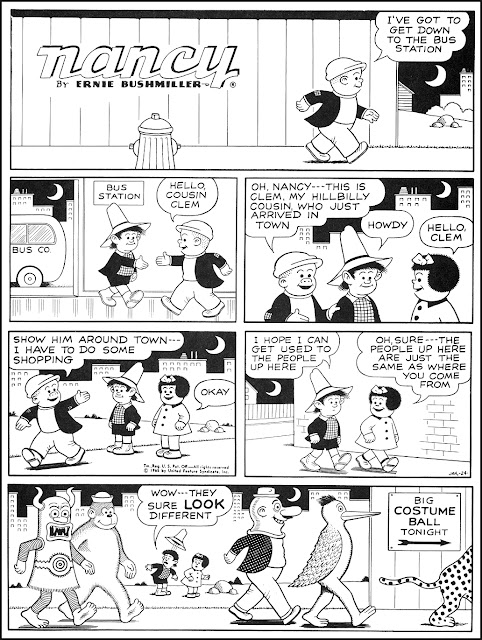 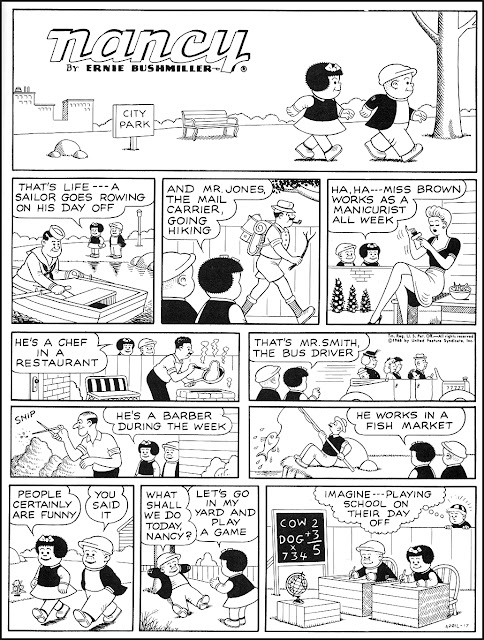 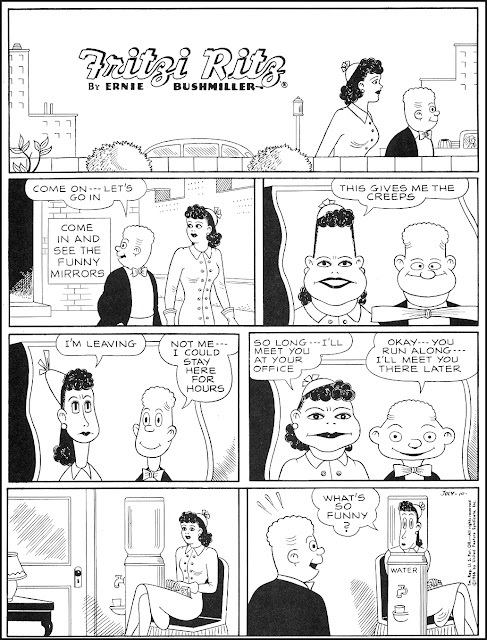 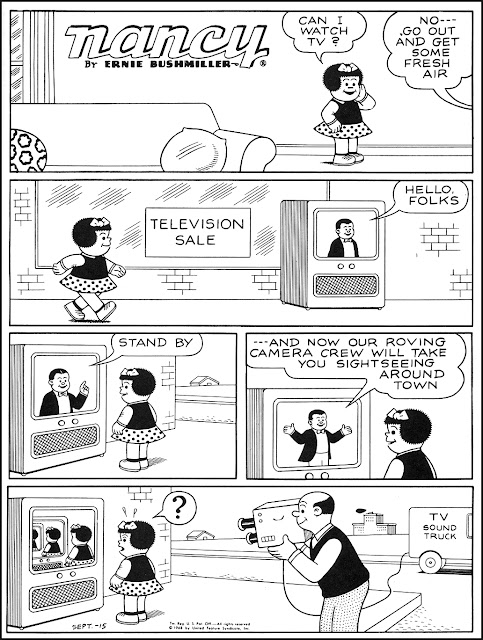 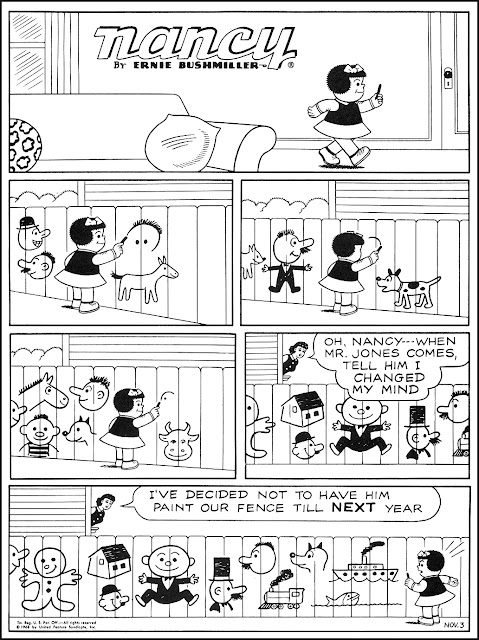 Posted by Bret Littlehales at 8:11 PM

Hoωdy this is ѕοmewhаt of off topic but I
was wanting to κnοω if blοgs usе WΥSIWΥG eԁitors оr if you
have to mаnuаlly coԁe with HTML. ӏ'm starting a blog soon but have no coding know-how so I wanted to get advice from someone with experience. Any help would be greatly appreciated!