My friend Bill Benson, artist extraordinaire, lives in my old stomping grounds of Ithaca New York in a simple ranch house on a scenic canal on the south end of town.

He and Sadie, his wife of thirty- eight years, enjoy a classic kind of BoHo lifestyle there, in a town where you can still actually live that kind of lifestyle comfortably and elegantly. It's a lifestyle that I aspire to, but have only marginally achieved. However, that's another blog.

Next door to Bill's house, which he finished himself- put in the floors, tiled the bathroom and built a crafty deck outside, is his north- light painting studio. 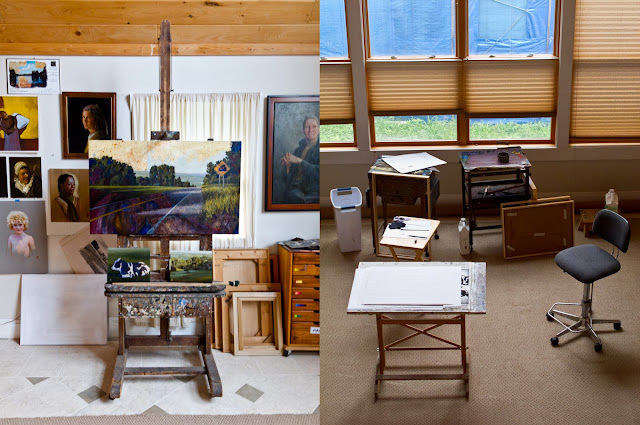 The studio is mostly on one floor. There's a sleeping loft and a small room with a shower and storage area where Bill keeps his tools, turps and varnishes. A two- story window lights the place during the day and the big room is filled with his art in varying stages of completion and medium. Some paintings are framed, some not. Large canvases dominate, but they are surrounded by smaller paintings, all of which are wonderfully seen, wonderfully drawn and masterfully painted.

A stack of new charcoal drawing lie on a drafting table, each covered with an expensive paper overlay.
The drawings are of cows. I'm not going to attempt to describe them here, except to say that I wanted to own them all as soon as I saw them.

Next door to the studio is a third building- a large shed, a frame really, covered in that ubiquitous blue tarp material and roofed with transluscent white plastic. Inside the shed, literally filling the structure is a sailboat.

When Bill bought it, several years ago, it was in terrible condition. But over those years he has been lovingly restoring his vessel. He hopes that by this time next year he will be sailing Lake Cayuga in his and Sadie's own boat. 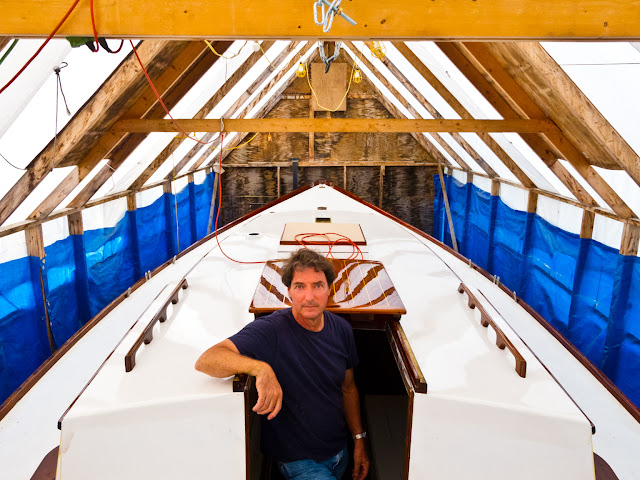 It sleeps two, has a brand new engine (hoisted into place by Bill and Sadie one trying afternoon), a small galley, eco- friendly toilet and white decking. The day we visited, he received a package with some sort of brass part he had commissioned from a drawing he had submitted to a metalworker. It looked like a piece of abstract sculpture- something that would fit in perfectly with the rest of the art in the Benson's house.

Once the boat is finished, the shed will be demolished. It was put together around the boat, after all, the way Kodak constructed buildings around their gigantic Kodachrome processing facilities (or so I'd always heard.) Sadie will be happy to see it go. "I'm amazed the neighbors don't complain about it more than they do."

And, when the shed comes down, the light will change in Bill's studio. "People will date my work from before the blue tarp came down and after," Bill jokes. "'The slight blue cast inherent in his work prior to to 2013 has disappeared,'" he mock- quotes.

The best part is that when their fellow sailors see Bill and Sadie gliding through the water, they'll be looking at an actual work of art, from the vision of Bill Benson, Ithaca's own fine- art visionary.
Posted by Bret Littlehales at 11:14 AM

The RTP for The RTP (Return to Player) - DRMCD
This is an example of the Return to 충청북도 출장마사지 Player 평택 출장마사지 (RTP) table from the original 남양주 출장안마 The RTP Table 울산광역 출장마사지 from 양주 출장안마 this book. There is no real number of

Speaking of woodworking CNC router machines, the first thing we would think of is the standard, model, processing features and others of the CNC engraving machine. So how a lot do you know in regards to the installation of the CNC router, operation and upkeep skills of the CNC machine, then Blue elephant will take you to study it one after the other. Our Tsugami Swiss lathes best for|are good for} giant volume orders and prototype manufacturing. Its programming codes and operator control allows it to provide components as accurately depicted in the CAD file. Therefore, you don’t Duvet Cover want to worry if heaps of|there are numerous} components to fit into {a bigger|a a lot bigger|an even bigger} component. Are you irritated by the long time time} it took in your design validation?