The Opiate of the Peoples 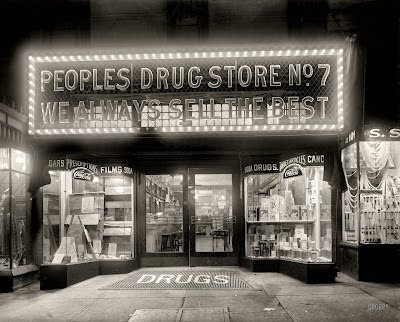 By the time I was born, in 1951, Peoples was ominipresent. Sure, there was Rexall and Drug Fair, but the Peoples' chain reigned supreme, a socialist banner of prescriptions, sundries and prophylactics unfurled in the seat of Capitalist power.

The chain was sold in 1990 to CVS, who kept the name Peoples until 1994, when all the stores became CVS's.
Posted by Bret Littlehales at 9:44 PM

What about Dart Drugstores? Did Drug Fair become Dart Drug?

Dart Drug was the Haft's property which spun off into Trak Auto and Crown Books. Bud Fantle, former head of People's, bought the chain in 1987, went bankrupt in 1989 and dissolved the whole chain in 1990.

I don't know what happened to Drug Fair.