The Rest of the Picture 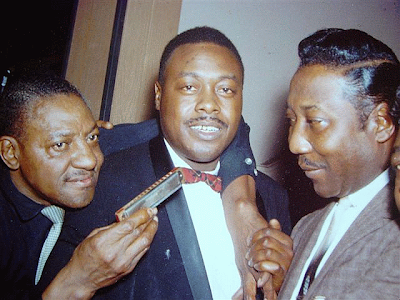 I found this amazing photograph on the web a couple of weeks ago, while searching for "harmonicas" on Google. It is, from left to right, Rice "Sonny Boy Williamson II' Miller, Jimmy Rogers and Muddy Waters.

I sent a copy to my friend Ward Gaines, co- author of the definitive Little Walter biography, Blues With A Feeling, ©2002, Routledge Press, who sent it to his fellow authors. Scott Dirks wrote back, wondering who the fourth man was. Was it Little Walter?

Last Sunday I went to see Chicago blues harp great Steve Guyger and told him about the picture. He said he had seen the picture at Jimmy Roger's house, back in the days when Steve played in Jimmy's band. He said the missing guy was James Cotton. He also said that the picture had gone missing from Jimmy's house shortly before Rogers' death in 1997.

Hmmm... not Little Walter, but James Cotton? I thought that it didn't look like Cotton (all this from that sliver on the right), and sent Steve a copy of the picture.

According to his reply, there's actually a fifth figure cropped out. Cotton is in the lower left of the picture, seated, looking up at Sonny Boy. The mystery man on the right is Otis Spann, Muddy's longtime pianist and band- leader. 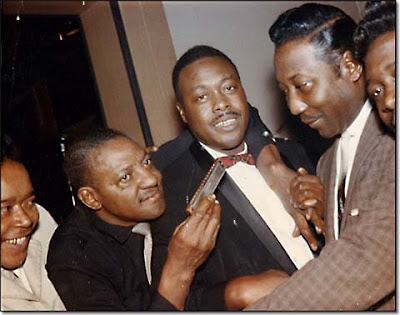 Yep- here's the full frame, courtesy of the internet. When I think of the hundreds of snapshots like this, probably taken by a fan or friend of the musicians, I have to wonder what happened to all of them. Some must still exist, in someone's scrapbook or in an old trunk in an attic somewhere. Where are the pictures of Muddy, Jimmy and Little Walter playing together? There are no pics of that band in action that I've ever seen. The greatest blues band ever and there are no pics, not even from studio sessions.

I haven't given up, and neither has Steve Guyger, nor Ward Gaines or any of the other collectors and fanatics of this great music. Someday, baby, someday....
Posted by Bret Littlehales at 9:10 AM

What a cool story..!

Wonderful picture and you are sadly correct about the lack of known photos (and film and live recordings)of this great great Chicago blues band.
I don't think it's Walter on the right. And I would venture to guess that by the time Cotton was on the scene Walter had taken quite a few beatings - the little that we can see of that guy has no scars. (So sad to say that 's why I don't think it's Walter.)

I love this picture too! It has my main man Sonny Boy and in fact all the rest are fav's too.But,i agree someplace in Chicago will be Granparents and Great grandparents belongings left to son's and daughters etc that will most likely contain picture gold like this and sad thing is, to following generations these pictures of ''strangers'' will mean nothing to them....except until that day... one curious minded soul will ask ''who are they''? Until then I guess....!

BTW...what year is this from? they all look in their prime and Sonny Boy even looks healthy albeit mischievous,irascible and no doubt a wee bit tipsy! That's my Sonny Boy!