An Interesting Time of It

This stems from an earlier dislike of those Christmas messages people send out about what happened in the last year, like "Billy's got two new teeth, and Lollie won the spelling bee, etc". Okay, there are some of those I like (you know who you are, Bellweather family), but mostly, I think those folks are lying about their excrutiatingly dull lives, sometimes at my expense, as in, no new teeth here.

That said, I'm now going to tell you all about a strange 24 hours I just had. So be forewarned.

I've been juggling the photography career and the music career a lot lately, ever since the win in Memphis. (See "Memphis Blues Again" for more info.) The music stuff is hot right now, but, believe it or not, doesn't generate a huge amount of money. The photography, on the other hand, is not exactly cool, but is, let's say, lukewarm. However, when I do work, I make a living wage. So I have to keep both on an even keel.

To me, it's all a series of creative outlets, which I allow myself only because they generate income. No hobbies for me!

I've also been struggling w/ minor health issues, so I've been more than usually health conscious, having begun regular exercise, new diet and generally depriving myself of the pleasures of over- indulgence.

So I was unhappy when I noticed a cystic lump on my chest. I went to the doctor, got it diagnosed (sebaceous cyst), tended to (course of antibiotics), and put it out of my mind.

At the same time, the Big Boy Little Band was scheduled to go into the Sirius/ XM studios and record for three hours. Six originals, one cover. Forty years in the making.

Today is Wednesday. The recording date was for yesterday, Tuesday. Monday afternoon, my horror- struck doctor sent me to the emergency room  to have the cyst, now dangerously infected, ahem, drained. Draining is a medical euphemism for torturing.

Because of the proximity of the infection to my heart, the procedure was truly an emergency. And because of the same proximity, they couldn't fully anesthetize me, so I felt everything. Okay, that's enough. On doctor's orders, I postponed photoshoots and music practices. Told to rest Tuesday and Wednesday, I went home Monday night dejected and in huge pain, but alive.

But a forty year dream doesn't rest just because of a stupid medical condition, folks. That's right- I went to the XM Studios yesterday and we recorded nine songs, and, let me tell you, in all honesty, they sound really good. Bill Wax, the head of the Blues channel (XM 74) will be playing our songs to a national audience as soon as they are mixed. Wow. Thanks again, Bill!

At this point, I should probably show you my wound, or play one of the songs. But the wound is way too gross and the songs are still unmixed, so, instead, here's a picture of me in my X- ray Gogs, the Chinese equivalent of X-ray specs. Unlike the Specs, the Gogs actually work. I can't wear them for long because they send intense amounts of radiation directly to my brain and, as I said before, I'm watching my health these days. 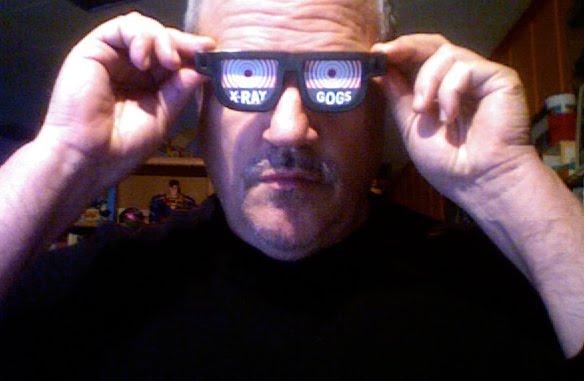 Posted by Bret Littlehales at 9:41 AM

well, thank goodness you're still with us! It has been a trip the last few days, hasn't it.

There were so many things in this post that just made me laugh out loud. :) Thank you for not ignoring that cyst! I'm sure the pain and general unignorability of it were factors as well, but you know. ;)

@ Ananimous: you're correct, but since you commented anonimousely, I'm not changing it.