As far as being wholly original and completely unique, well, let's face it, it doesn't really happen all that often. Even the work of an artist as great as Robert Johnson exists as an amalgam of music that went before, and Picasso and George Bracque were neck and neck at one point.

As I've said many times in this very blog, I grew up in a turbulent era. The late 1960's were a time of destructive but sometimes awesome creativity. However, once researched, it becomes clear that one thing led to another. Muddy Waters led to Jimi Hendrix. Buddy Holly, et alia led to the Beatles. Woody Guthrie led to Bob Dylan. They're all clearly products in some way of their influences. Yes, I know it's a bit simplistic, but I think you get my point. Captain Beefheart listened to Robert Johnson and Charley Patton, Ornette Coleman, etc. Who didn't?

The question is, how the fuck did it take him there? 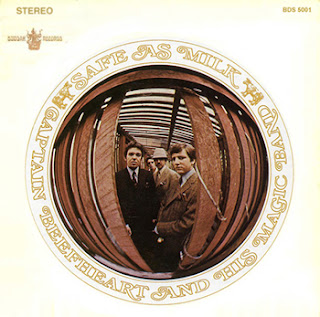 By the time I met him, during a tour to promote his signing to the Reprise label, he was pretty much fully formed. Gone was the natty blues dandy of Safe as Milk, his debut album on Buddah, that hinted at the future of the Captain with songs like Abba Zabba and Zig Zag Wanderer, as well as the wonderful cover of Robert Pete Williams' Grown So Ugly, with young Ry Cooder's very cool guitar. In that persona's place was the Trout Mask Man, complete with those clothes: the hat, the scarves.

I hate to use the phrase larger than life, but it's not inappropriate here.

Beefheart and Cooder were touring together (but not playing together- Cooder played solo) as part of their Reprise contracts, and my Ithaca band, Egret Brand, had been asked to open for them. In my recollection, it was a snowy, icy night, but my recollections of Ithaca in the early '70's are full of snowy, icy nights. We played our set and then hung out in the dressing room with the Magic Band. I remember Ry as being very aloof, but he may have been just shy, or consciously trying to distance himself from the travelling circus that was the Captain Beefheart entourage. At any rate, he was extremely self- protective, and separated himself completely from us and Beefheart.

The Captain was surrounded by literally all the freaks in the central New York area. Half of them looked like college students and the other half looked like members of the band, or would have if the actual Magic Band hadn't looked at least three times freakier. Mark Boston, who played bass under the name Rockette Morton, actually had a waxed mustache with Dali- like pointed tips. Drumbo (John French) wore an oversize trenchcoat and played a drum set made up of different sized conga drums, including the bass. There might have been a tropical motif on the bass drum head.

Ed Marimba, fresh from the Mothers of Invention where he was Artie Tripp III with the green mustache, still had a green mustache. Beefheart renamed all his musicians, so in addition to the above, guitarists Jeff Cotton and Bill Harkleroad had become Zoot Horn Rollow and Antennae Jimmy Semens respectively.

As the band took the stage, the PA played a Rolling Stones song that the Captain immediately began to mock in his deep cement- truck voice.

Then they played. I remember they began with Abba Zabba (or did they?) What is indisputable is that it remains one of the musical highlights of my life. I was amazed that they could perform these ridiculously intricate songs with their seemingly random stops and starts and microscopic changes. I really had never heard anything like it.

And never would again.

Afterward I asked him if I could join his band, like a kid prepared to run away with the circus. He actually said, "What do you do?" I replied that I was the harmonica player/ singer in the opening band. He was pretty nice. "Oh yeah. You guys were good, but I already play harmonica and sing," he said. "So we can't use you."

The Captain and I parted ways that night. I became a musician and an artist, then a photographer and a husband and a dad and a musician again and a granddad. Captain Beefheart stopped playing music in the early 1980's and, as Don Van Vliet, devoted himself full- time to painting his incredible abstracts.

His work as a musician was done. Others, like John French, re-united the Magic Band, and still others, like Tom Waits, grew under his incredible influence.

There is no dearth of biographical information about Captain Beefheart on the interweb, so I don't feel compelled to go into, say,  the Frank Zappa relationship, or review the albums. But you should- it's a very cool story.

Let's just leave our protagonists in an underheated music venue called the North 40 on a snowy night in Ithaca, NY, circa 1970. 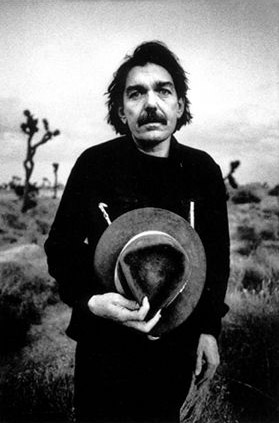 Posted by Bret Littlehales at 11:37 AM

Very poignant piece - and especially sad that so many of these guys who literally blazed a mind-blowing path back in the '60s aren't being at all replaced. Or at least that's how it seems to me. Maybe I just don't understand the current state of affairs of the music scene.

Liked this a lot. Write more about snowy, icy nights in Ithaca.

Really good to read your blog Bret. I remember that night really well, but not as well as you do.