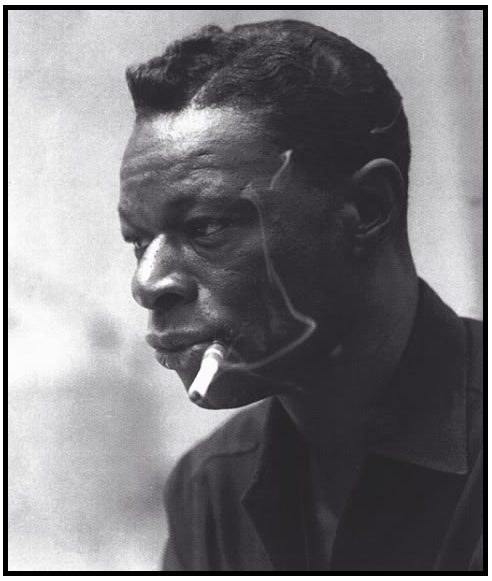 Growing up in the 'fifties and 'sixties, I only heard the later, lush, overproduced Nat Cole. It wasn't until 1968 that I heard the great piano trio work, with Oscar Moore on guitar,   that produced "Gee, Baby, Ain't I Good to You" and "Hit That Jive, Jack!" Once I did hear it though, I knew I had heard genius. That smokey voice (three packs of Kools a day!) and that great piano; Oscar Peterson used to say that no one comped behind their own singing as well as Nat, and of course, he was right.

A huge influence on the young Ray Charles, one can hear Nat's voice in Ray's first Swingtime and Atlantic work, songs like "It Should Have Been Me" and "Baby, Let Me Hold Your Hand."


He recorded with the unlikely grouping of Les Paul, Buddy Rich and Charlie Parker on a Jazz at the Philharmonic session. Nat and Bird's playing are the undeniable highlight of the concert.

After his phenomenal cross-over success, Nat contended with terrible racial anger. He was beaten onstage at a show in Birmingham, Alabama, and a cross was burned on the lawn of his Los Angeles home in 1948. His primetime television series was cancelled prematurely due to a lack of sponsorship.

Unfortunately, it was the cancer that did him in, pretty much at the height of his success. He was at the top of his pop game in 1965 when the three- pack- a- day habit caught up with him.

To me, and to my aging hipster pals and cohorts, it will always be the early stuff, the original of "Sweet Lorraine" with that little stutter, the rare version of Mel Torme's "Christmas Song" before Johnny Mercer dubbed in the string section, or even the Cole/ Mercer duet on "Save the Bones for Henry Jones", Danny Barker's sweet novelty song.

A truly unique musical voice in the annals of American music, Cole died on February 15th, 1965 at the age of 42.

Posted by Bret Littlehales at 1:15 PM

"There was a boy, a strange and special boy."