I want to go to Veronica Lake 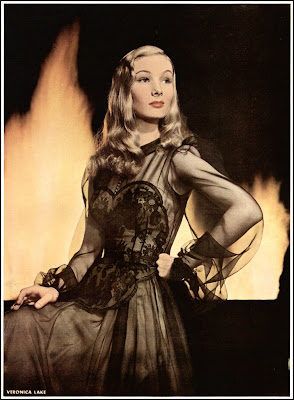 The first time I really looked at Veronica Lake was when I was maybe 18 years old. I Married a Witch with Frederick March and the aforementioned Ms. Lake was the name of the pic. I knew who she was, she of the "peek-a-boo" hairstyle, through caricatures, mostly in Warner Bros. cartoons. What I didn't realize was how complete the whole VL package was: not just the hair, or the face, or the body (all spectacular in that WWII pin-up sense, where the women were mostly clothed and yet radiated sex), but that amazing voice, like a cup of hot chocolate flavored with a drop of creme de cacao. 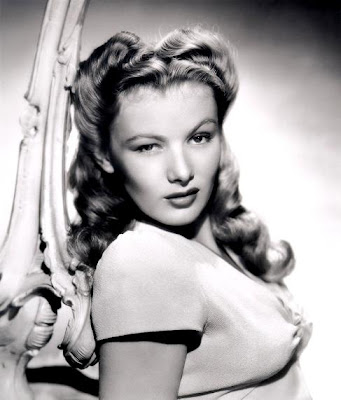 Eschewing the peek-a-boo look
Then in a college film class I saw Sullivan's Travels, with Joel McCrea and VL, a mid-period Preston Sturges masterpiece, where Ms. Lake does a little light comedy and impersonates a hobo. A male hobo, for that matter. It doesn't matter that she radiates femininity even in bad drag, she's still great. 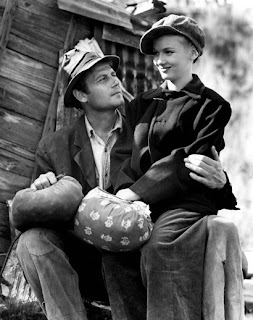 Then This Gun for Hire, and The Black Dahlia (as flawed a film as was ever made). There are others, The Glass Key, for instance, but I've never seen them. In all of the films I have seen, I can't take my eyes off of her. She is literally mesmerizing. What was she like? I think. And I'm thinking sexually. I can't help it, she's just incredible to me. 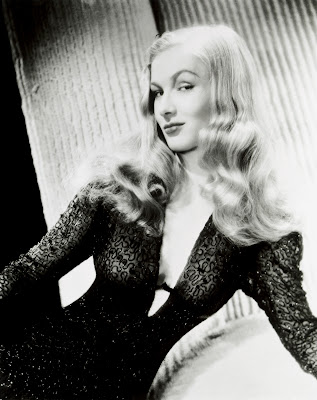 Offscreen, evidently, she was a mess. Raymond Chandler called her "Moronica" Lake, and Eddie Bracken referred to her as "a bitch". After a bad miscarriage during a movie where she played a Nazi sympathizer, The Hour Before the Dawn, her career spiralled downward and she was, aside from The Blue Dahlia, essentially finished. Alcoholism and mental illness dogged her final years.

I visited Virginia Mayo one time at her home in her Thousand Oaks, California, when she was in her mid- seventies. She was still beautiful, very regal and even serene. She had a bag full of fan mail from just that week, and invited my friend George Ferris and me to watch A Song Is Born on her VCR.

On the TV screen I thought she looked like this: 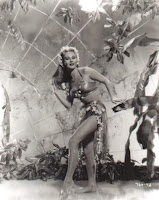 As I sat next to her on her bed she looked like this: 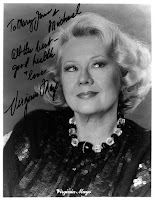 Which is to say, simply, great. However, it was also very surreal to connect this lovely grandmother with the imaginary siren on the television screen.

Veronica Lake was never allowed to become a lovely grandmother. That was not a role she was offered by the cosmic forces that govern our lives, a role Virginia embraced beautitfully. Veronica can best remain the protypical imaginary siren, peeking through her universe- class- hair, looking at us through her impossible lashes, and promising the boys impossible dreams.
Posted by Bret Littlehales at 12:33 PM

The title of this post reminds me of Our Glass Lake/Hourglass Lake from Lolita, which is one of my favorite cases of misheard names in the universe, literary and otherwise. Obviously your title is not quite the same, but it still made me think of that. I also enjoyed the post quite a bit :)