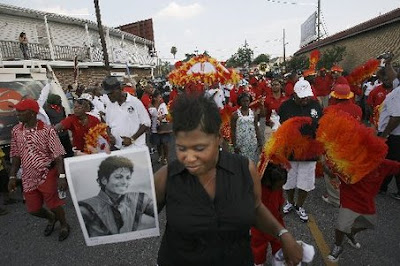 Even though I live in Washington DC, the newspaper I read is The Times- Picayune out of New Orleans, America's Greatest City. I think it's important to know what's going on in AGC, to know who played where, what artist is having a show, who killed whom, what the mayor has done right (apparently nothing) and what the mayor has done wrong (apparently everything), and the T-P covers it all.

There's a link to the right of this column, in case you too want to know what's going on in AGC.

This morning there was video and still coverage of a semi- spontaneous second- line in honor of Gary, Indiana native Michael Jackson. Second- line parades are given as a form of highest respect, usually to prominent New Orleanians, mostly of the musician variety. In fact, I don't know of any ever given to a non- resident of AGC.

Amazingly, no one was hurt, and the entire event was very uplifting. The video carries a soundtrack that is pure New Orleans' second- line: brass bands, percussion, great dancing and general parading, a tradition not to be scoffed at, especially in AGC. In fact, it's one of the main reasons it is America's Greatest City.

Many of the participants held signs and wore articles of clothing pertaining to Michael Jackson: T-shirts, sequined gloves, album covers. There was lots of dancing, on houses even, and in the streets. It was a huge, great celebration markedly devoid of all the things I complained about in my last post. No artificial music, no posturing, no celebrity pretentiousness.

Once again, AGC has forced me to re-consider my thinking (slightly) because it has not been influenced in the slightest by the tawdrier aspects of Michael Jackson's life.

It's just Michael Jackson's second line. And if the good people of New Orleans, La, decree that he earned it, who am I to argue?
Posted by Bret Littlehales at 10:46 AM

This is great - I would love to see the video of it. I guess you're right - there is something there to respect. I think MJ was definitely as great as Elvis, just in a different way.

Seems like a funeral in New Orleans is probably one of the greatest celebrations of life a person could ever witness. I wouldn't know for sure, though, since I've never experienced one.

neither have I! at least, not in this life, that is.