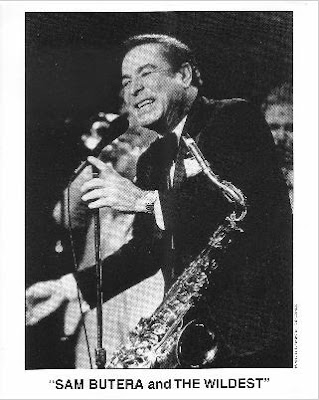 Sam Butera died yesterday. He was born on August 17th, 1927 in New Orleans. Best known for his tenure with Louis Prima, he held his own after Prima's death in 1975, and continued to play with his band, The Wildest, mostly in casinos in Las Vegas, Atlantic City, Reno and Mississippi.

He music career began auspiciously in New Orleans where his father owned a grocery store. By the time he was eighteen he had won a contest, "Outstanding Teenage Musician in America", sponsored by Look Magazine. He was playing in Leon Prima's Bourbon Street club, The 500, when Louis Prima offered him the gig in Vegas. Butera was reportedly making $700 a week playing jazz and backing strippers, most notably Lily (or Lili) Christine the Cat Girl. Prima offered him $250, and Butera flew west, no doubt sensing greater opportunites, despite the pay cut. 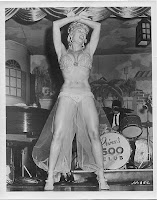 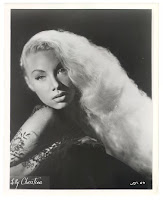 Pictures of Lily
He arranged Prima's hits, including "Just a Gigolo" and "Jump. Jive, and Wail", and was known for his over- the- top stage antics and indefatigable tenor sax playing. 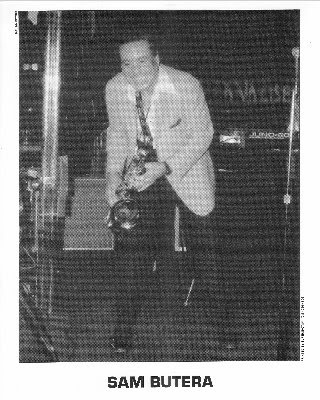 He was also a connoisseur of New Orleans' black R n' B scene, and according to Irving Banister, Danny White's guitarist, used to frequent Danny's performances at the Safari Club. "Danny saw him in Vegas," says Irving, " and Butera had all Danny's stage moves."

A true son of the Big Easy, Butera was one of those only- in- New- Orleans Italian soul men, like his long time partner Louis Prima, who brought a native two- step beat to his R n' B, idolized Louis Armstrong, hated David Lee Roth and swung like a crazy man right to the end.
Posted by Bret Littlehales at 9:29 AM

Is that Keely Smith there in the background on that video clip? We were just talking about her and Louis Prima the other day. So glad to hear that Sam Butera hated David Lee Roth!

He stole Butera's arrangement of "Just a Gigolo" and never paid him.

I hate David Lee Roth, and "his version" of Just a Gigolo (in quotes because he changed nothing). Grr!

What I was going to say, before I read that he stole that arrangement, was that isn't Keely Smith funny? Every clip I've ever seen of their performances she looks PISSED. I think it's her stage persona, because it's so over the top, but it's sort of intimidating.

I actually liked David Lee Roth doing a take off on Sam Butera, until I heard he ripped his arrangement without compensation to Sam. That is so bad. I find it hard to understand people doing that, especially to someone they admire - in this case I assume Roth admired Butera, or else he would never have mimicked him. Was that Sam playing sax in Roth's production? If not, it should have been. As a sax man myself, I've always loved Butera's style. It was the essence of great musical showmanship and entertainment. I'd love to hear more about his early days.