Seventy- six years old, a virtual recluse in the Australian Bush, he died in a car crash, survived by his wife, who was in the car with him, but not fatally injured.

To those who actually remember the so- called '60's, Augustus Owsley Stanley III, or Owsley as he was known popularly, was the last famous chemist on the planet. He was responsible for the first really clean illegal LSD.

LSD- 25 was invented sometime in 1938 by a Swiss chemist named Albert Hoffman, who worked for Sandoz Chemists in Basil, Switzerland. In 1943, Hoffman took acid and, essentially, liked what he saw, as did writer Aldous Huxley, among others.

The Army famously experimented with the drug, as did a pair of Harvard professors, Timothy Leary and Richard Alpert. Harvard fired Leary and Alpert and the government took a beating on television's 60 Minutes for the experiments.

Owsley learned to synthesize the drug in 1965, and by 1967, it was illegal in this country.

But that, in many ways, is only the beginning of the story.

Owsley's acid became THE drug of the '60's, with terribly mixed results. In many ways it opened the doors to incredible bursts of creativity: Hendrix, the Beatles, R Crumb, Bob Dylan and others changed how we interpreted our own culture here in the West, and Ken Kesey's One Flew Over the Cuckoo's Nest was written on LSD.

However, the Grateful Dead and other mediocre (to say the least) groups rode the same wave. Peter Green, the gifted guitarist and founder of Fleetwood Mac was dosed by members of the Dead and never really recovered. To a certain type of person, LSD was the gateway to permanent psychosis. And Owsley's version, famously potent, opened up a lot of minds. Some, however, never closed again.

According to the New York Times obituary, Owsley believed that there was going to be a new Ice Age, and so moved to the Australian Bush where he lived out his days. 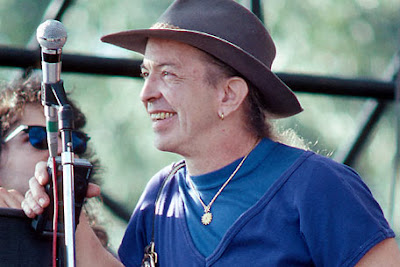 Posted by Bret Littlehales at 3:36 PM

Happy Trails Owsley - yup, I also liked what I saw ...

The comment about The Dead dosing Peter Green and his losing his mind is BS. An interview with Mic Fleetwood describes Green leaving the band in England for 3 days and coming back completely changed from the drug ( he wanted the whole band to give up all their wealth) is the truth. He may have tripped with the Dead, but you can't lose what you never had.