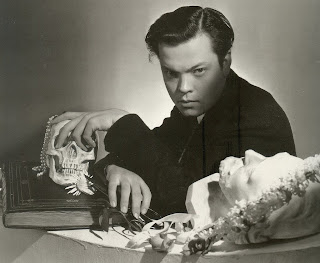 There are a many sites about Orson Welles. http://www.wellesnet.com is a great place to start, and a has lots of links, etc., for Welles-o-philes.

This is not a Welles site. I just like him. That's all, really. And I often think about him, especially as regards his approach to creativity.

This morning I was briefly watching It's All True, the re-cut version made from so-called "lost" footage. Welles himself never completed the film, therefore never cut it. In fact, I don't think the footage was ever shown outside the RKO studios.

For those of you unfamiliar with the whole story, let me (probably inaccurately) summarize: after Citizen Kane, Welles began two feature films, The Magnificent Ambersons, and Journey Into Fear. At approximately the same time, Nelson Rockefeller approached Orson about making a documentary on our Latin neighbors. Rockefeller represented the Good Neighbor Policy, which was concerned about Nazi ties within the Latin Americas, most specifically Brazil.

Orson had always been interested in liberal politics, so he accepted and added the third project to his list. He sent a 2nd unit crew to Mexico and began filming, and, back at RKO, combined his schedule for the two other movies he had planned to shoot.

He had completed Ambersons, but hadn't cut it, and finished photography on Journey when he flew to Rio in time for Carnival. His concept of the film centered on the Carnival and, subsequently, the Samba.

Okay- now here's where everything begins to unravel. The studio cut Ambersons miserably, reportedly chopping off 45 minutes and reshooting significantly. The crew in South America was plagued with mishaps, Orson was partly responsible for the death of one of his main subjects, a national hero named Jacare, and RKO withdrew funding, as did Rockefeller.

After the RKO failure, Welles was unable to get financing for other projects. Prior to this point, he had known nothing but success. He was a wunderkind at his prep school, had acted in Ireland at the age of 17, starred in radio, and was a hot director on Broadway. Everything he touched turned to platinum. And let's not forget Kane. Not only is it a major achievement, but it's entertaining! Fun to watch, mesmerizing, even. Very cool movie.

After all that, he was reduced to hiring out as an actor, perhaps his weakest talent, to make a living. He directed a bad pic called The Stranger, an interesting pic called Macbeth, and a good pic called Lady From Shanghai. The worst things about them are his acting.

Then a great acting turn in The Third Man, directed by Carroll Reed, and he made a few more films, some good, at least one excellent, and some more famous for having never been finished than anything else.

Nowadays he's remembered for his commercial work, especially a bootleg audio tape for a British ad firm. "You people are such... pests," he says peevishly.

In the introduction to the It's All True, Orson implies that he was under a Voodou curse, much like the great Jazz composer and performer Jelly Roll Morton. Morton thought he was cursed because he had not fulfilled a bargain he had made early in life with a Voodou- man. The parallels are striking. Huge early success and bursts of genius- like creativity, combined with tremendous charisma, virtuosity and Herculean self- confidence lead, ultimately, to ruin and failure, inability to complete projects and relative poverty.

I think the problem has more to do with personality. Casting Jelly Roll aside (maybe for another blog), let's just consider Orson. Why was he working on so many projects? Did he need all this activity to keep his energy going? Is there an ADD problem?

I sometimes wonder if I have an ADD. (It would certainly explain a lot!) Oftentimes, I feel myself filled with creative energy and I have to be very careful about which project I pursue, because it's easy to start things, but it can very hard to finish them.

I put that in italics because it's so important. The next part is it's very important to finish creative projects. Why? Because the path to unfinished ideas is strewn with failure. Failure of energy, failure of the ego. Unfinished projects can strip you of the self- confidence you need just to get through the day. And by you, I mean me.

Creativity is a terrible trap. I'm a creative person and I feel trapped a lot. I don't feel as if I'm particularly good at it, it's just what I can do. I can't do anything else. And the only times I'm successful are the times I can focus on the project at hand. Therefore, I have to pick my non- commercial projects carefully, lest they linger like a bad fish smell. By the way, these are the things I learned in art school. Not prep school, but art school. Don't pick a project that will cost too much. Don't miss deadlines. Don't count on others to help you. Stay focused on the project at hand.

Somewhere Orson lost the pinprick focus he needed. Somewhere down the line he became Orson Welles, and it took up all his time. 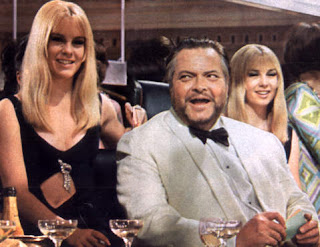 Of course, it may have been the Voodou.
Posted by Bret Littlehales at 10:29 AM

Sometimes, I think the wunderkind-types possibly start out too fast and too furious. then they burn out, maybe? Or maybe not burn out completely, but the fire does diminish a bit. I know it's simplistic but it's the best I can do.

Jack Black could play Orson Welles in a bio pic. Especially in his later years (I assume that final picture is Welles in his later years). As for the creativity conundrum, maybe one important step is possibly considering that you might be good at it? Not that it's just "all you have", but that it's something you are good at and that that's the reason why it is such a central part of your life?

Thank you, EmLit, whoever you are! :)

The phrase about unfinished ideas being strewn with failure, and how it can destroy your self-esteem, is really profound. I tried to copy and paste it in this comment, but it wouldn't work. Anyways, you say, "and by you, I mean me," but it felt like a life lesson that had never occured to me before. It also reminded me about this analogy Phil's dad made about taking steps toward your ultimate goal, and how if you lose sight of that you may have walked forever but still basically be in the same place you started. That kind of goes hand in hand with your lesson, don't you think?

I have a very similar problem about starting projects and not finishing them, and working on too many things at a time. If anything I think it's a lack of discipline and patience: you have a great idea but getting there takes more attention than you can fully deliver, especially because you have a lot of OTHER great ideas that won't get done as long as you're wasting time on this first great idea so maybe you should just come back to the first great idea later.

Anyway, story of my life, which is why I've produced very little of greatness that isn't currently walking around making up songs and trying to memorize how to spell her name. ;) Fortunately I've never had any great ambitions so these days I'm pretty satisfied with the greatness I can claim.

I also don't think this problem has anything at all to do with ADD. I know way too many people who share it, myself included, and I don't think it's an *inability* to focus so much as a reluctance to. Like I said, lack of discipline.