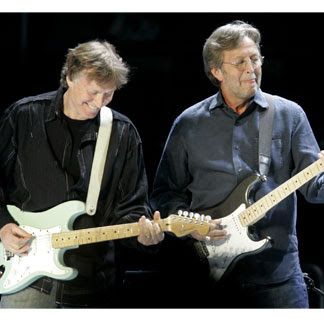 Every time I see a rock band on TV these days, there's a front line of celebrity musicians (read personalities) and a backline of support musicians (read anonymous actual musicians.) Take those awful jams at the Rock and Roll Hall o' Fame broadcasts, or anything involving Paul Schaeffer when he's not playing on David Letterman's show. If you go to see the Beach Boys there's maybe one Beach Boy and twenty session guys onstage. The only time I saw Bruce Springsteen there were 240 people in his band. At least, I think there were that many. And most of them were guitar players.

I think that Paul McCartney has 50 people in his band now, and nobody has any idea who is even in a band like, say, Guns n' Roses. Or cares.

Ordinarily, I wouldn't even dwell on this, because rock music is not my thing. I'm a blues guy. I have a blues band, an extensive collection of blues recordings, and I'm a really obnoxious snob about the whole thing. But I'm also a man of many theories, and one is that the best of anything cuts across all categories and is, by virtue of being the best, worthy of anyone's, even the most snobbish person's, attention.

Last night I saw Blind Faith, the best rock band I've ever seen. It had Chris Stainton on keyboards, Willie Weeks on bass, Abe Laboriel, Jr. on drums, Steve Winwood, whom you may remember from the Spencer Davis Group, on guitar, keys and vocals and Eric Clapton from the Yardbirds on guitar and vocals. There was also some wonderful back-up singing from two lovely ladies, Michelle John and Sharon White. 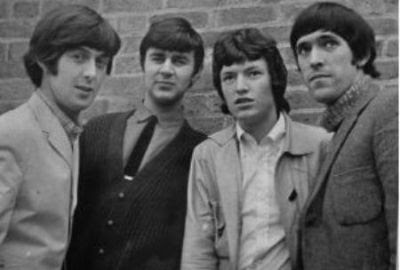 Mr. Winwood, second from right, in The Spencer Davis Group 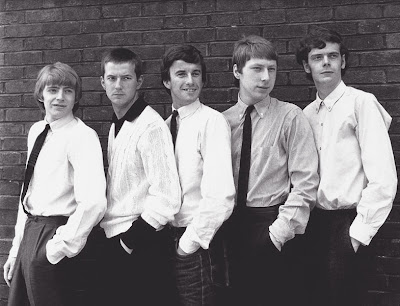 Mr. Clapton, second from left in The Yardbirds
That's it- just five musicians, rocking all night, two solid hours plus change, great hits, excellent sound, incredible vocals, no jive. What more could you ask for? Made me remember why I started listening to music on the radio in the first place.
Posted by Bret Littlehales at 11:11 AM

Eric Clapton is so cute in his picture there with the Yardbirds! I love him! And I am so envious that you got to go to that concert. Oh well, I am glad you enjoyed it!

Re: Eric Clapton. What's with the Brits and the hair? Do they just have good hair genes or what?

Re: British hair--it's either that or they get transplants. I mean, they can afford it, after all.

I'm pretty sure Buckethead (the most talented guitar player on the planet, imho (also, maybe the tallest)) is in G'n'R now.

Actually, I know he was about two years ago, but I'm not sure he still is.